New NZ Health Survey data show some encouraging recent reductions in smoking prevalence. However, progress remains inadequate to achieve the Smokefree Aotearoa 2025 goal and the government needs to take urgent action, particularly to reduce marked disparities for Māori and Pacific peoples. The data also show increased uptake of e-cigarettes/vaping over the last 3-4 years, but the contribution of vaping to helping achieve the smokefree goal is not yet clear.

This blog provides a summary of some key points from the 2018-19 NZ Health Survey (NZHS) data as available on the 2018-19 annual data explorer website (https://minhealthnz.shinyapps.io/nz-health-survey-2018-19-annual-data-explorer/). The figures reported are unadjusted prevalences [1] from NZHS surveys conducted in 2006/7 and annually from 2011/12 to 2018/19. For simplicity only data and graphs available from the explorer website are described and displayed. 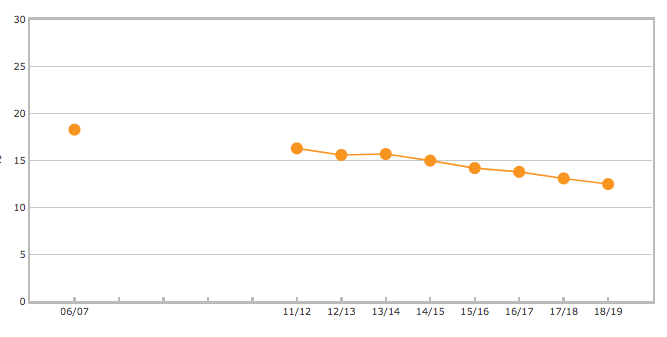 Based on these data, very substantial disparities in smoking persist and Smokefree Aotearoa 2025 is nowhere near on track to be achieved for Māori, and is likely to be missed by a very large margin.

Based on these data, very substantial disparities in smoking persist and Smokefree Aotearoa 2025 is (as for Māori) way off  track for Pacific peoples and is likely to be missed by a very large margin.

Based on these data, very substantial disparities in smoking persist and Smokefree Aotearoa 2025 is not on track to be achieved, and is likely to be missed by a very large margin by people among the most deprived populations.

The 2018/19 data therefore provides no evidence that as smoking prevalence has declined over time, the population of smokers in Aotearoa increasingly consists of heavy smokers. That is, it fits with most international data on this topic which does not support the ‘hardening hypothesis’ which proposes that as smoking prevalence declines the remaining smokers include a progressively greater proportion of more heavily addicted smokers who find it harder to quit [2].

There were concerning disparities in quit rates by:

The proportion of the population that has ever tried e-cigarettes/vaping increased from 16.2% in 2015/16 to 21.2% in 2018/19, with substantial increases occurring among all age groups aged <55 years, men and women, and among all ethnicities. 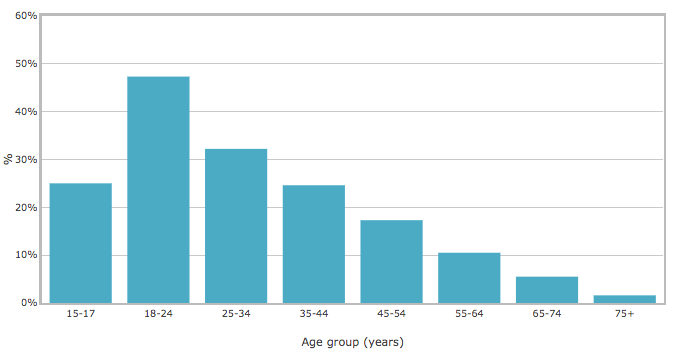 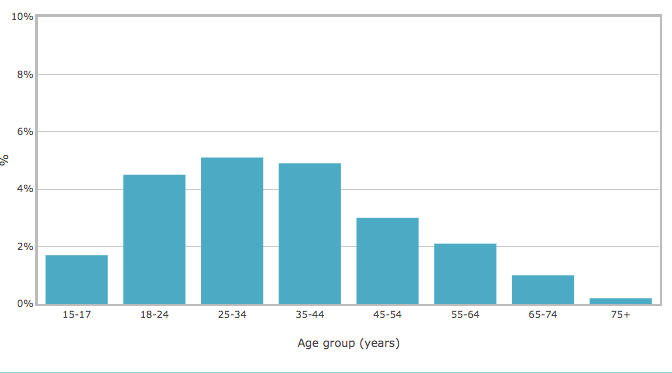 Data on e-cigarette use available through the NZHS data explorer website are not reported by smoking status (e.g. current, ex, never smoker), which is a major limitation.

The 2018/19 NZHS data on smoking and e-cigarette use reveal steady but unspectacular progress in reducing smoking prevalence. However, NZ is clearly not on track to achieve the Smokefree Aotearoa Goal, and current tobacco control strategies are not adequately addressing smoking disparities for Māori, Pacific and low SES populations. Quit rates among smokers have not changed greatly since the smokefree goal was adopted in 2011, and there are worrying disparities in quit rates by ethnicity and socio-economic status. After some initial promising reductions in uptake among young people, progress appears to have slowed recently, and smoking uptake continues at an unacceptably high level among young adults. Overall the picture is very concerning and indicates an urgent need to adopt more innovative and radical interventions.

The figures reveal a steady increase in the trial, regular and daily use of e-cigarettes/vaping from 2015/16 to 2018/19. This increase has not been accompanied by any notable acceleration in reductions in smoking prevalence or an increase in quit rates, as might be expected if e-cigarettes were encouraging and supporting large numbers of smokers to quit or transition away from smoking to vaping. Trial, regular and daily use of e-cigarettes from 2015/16 to 2018/19 has not coincided with increases in adolescent or young adult smoking, as would be anticipated if vaping was acting as a ‘gateway’ to smoking. Nonetheless, it has coincided with a period when previous declines in smoking prevalence among adolescents plateaued and when the rate of decline in smoking prevalence slowed among young adults. This may suggest an adverse impact of e-cigarettes on adolescent and young adult smoking uptake, though the evidence is far from definitive.

Observations of the impact of e-cigarettes/vaping on smoking uptake, quitting and prevalence are very preliminary and somewhat conjectural for multiple reasons, including:

The figures available through the data explorer are informative, but more in-depth analysis is required on some key aspects of smoking and vaping in Aotearoa – important gaps in the data available include the prevalence of smoking by ethnicity among adolescents and young adults, and patterns of e-cigarette use in relation to smoking status.

However, the overall picture is clear at least in one respect, inadequate progress means we must intensify efforts to achieve Smokefree 2025. The urgent need for a clear regulatory framework for e-cigarettes/vaping has been identified in an open letter to the Health Minister by researchers and over 60 health, community and school organisations. In addition, we require a clear government commitment to achieving the Smokefree Aotearoa goal and the implementation of a comprehensive government strategy that includes broad population-based ‘game-changer’ measures designed to support quitting and reduce smoking uptake, particularly among Māori, Pacific populations, and other high prevalence groups. Such game-changer measures could include tackling policy and intervention areas that are currently unaddressed, such as greatly reducing the supply of tobacco products and regulating smoked tobacco products (e.g. removing most or all of the nicotine) as set out in the ASAP Strategy [3].

[1] Footnote: Because the prevalences are unadjusted they could be affected by differences due to sampling variation or change in the demographics (age structure, ethnicity distributions) of the populations between surveys.