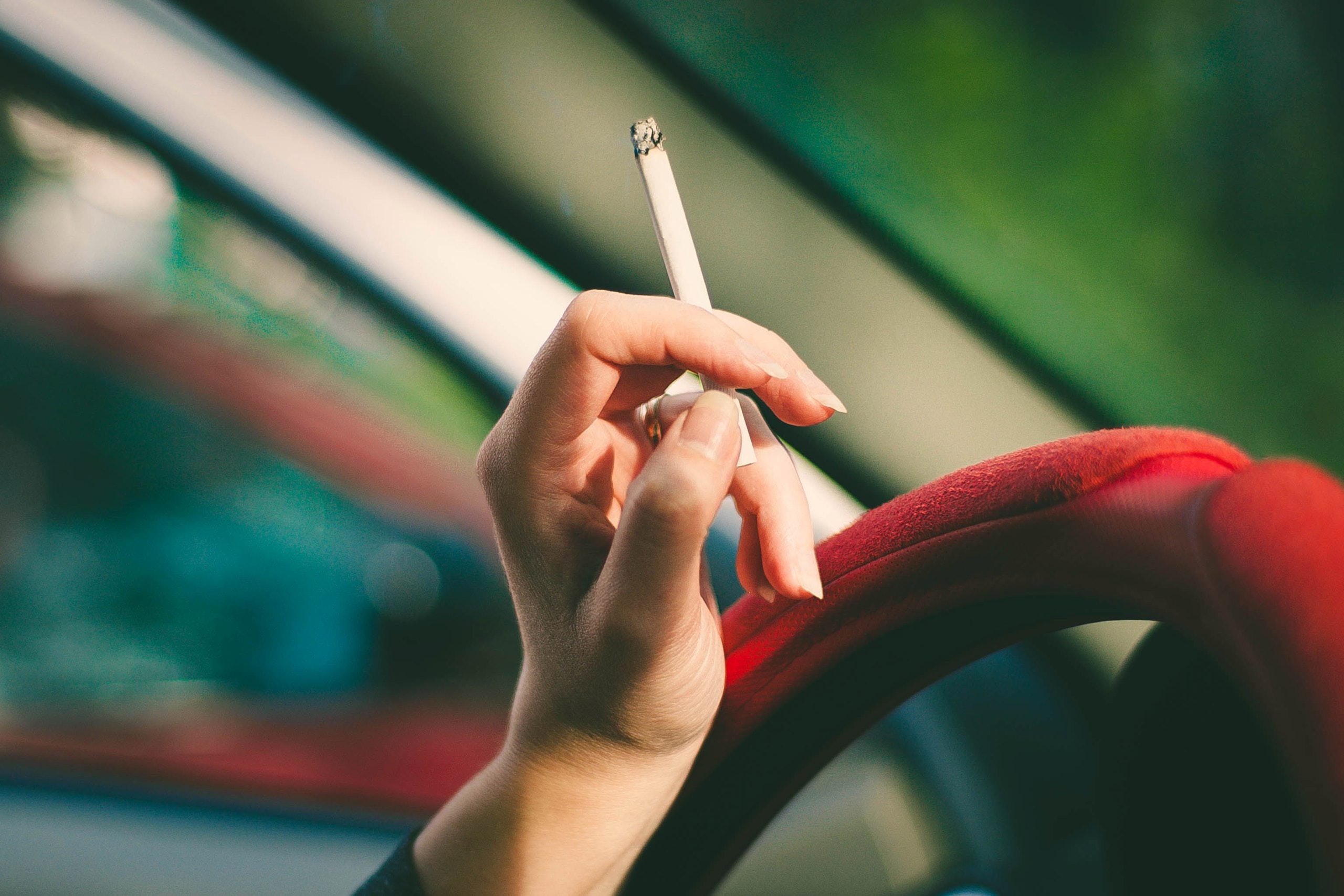 Photo by Антон Воробьев on Unsplash

Secondhand smoke (SHS) is a health hazard for children and causes serious diseases, including life-long respiratory conditions such as asthma. 1 2 Smoking in the confined space of a car exposes children involuntarily to extremely high levels of SHS. 3 4 This evidence helped to trigger calls to introduce smokefree policies to protect children, and internationally, some local and state jurisdictions introduced laws banning smoking in cars when children were present. Some of the first such laws were passed in the State of Arkansas (USA) in 2006, in Tasmania and South Australia in 2007, and in Nova Scotia (Canada) in 2008. By 2014, all Australian States and Territories had implemented smokefree cars laws; as had all but two Canadian Provinces, and several countries including England (2015), Scotland (2016) and Ireland (2016) by 2016.

In Aotearoa, many individuals and organisations have advocated for a smokefree car law, and the landmark Māori Affairs Select Committee report recommended this measure in 2010. 5 Studies have shown Kiwi children have high levels of exposure to smoking in cars, and revealed substantial disparities in exposure. 6 7 NZ population surveys have repeatedly reported exceptionally strong (around 90% or more) support for a ban on smoking in cars among children and adults (including people who smoke). 8 Despite this overwhelming evidence of harm and support for change, successive NZ governments did not act, a failure we called out in Public Health Expert blogs in 2013 and 2017.

We thus warmly congratulate the previous government coalition and the current Government for addressing this unacceptable and entirely preventable health risk for children. The Smoke-free Environments (Prohibiting Smoking in Motor Vehicles Carrying Children) Amendment Act 2020 was granted assent in May 2020 and comes into force on 28 November 2021. From that date, it will be against the law to smoke or vape in a vehicle that has a child (<18 years) occupant.

So now that a law is finally being enacted in Aotearoa, what effect can we expect and how can we maximise the positive impacts of the law while minimising any unintended and potentially negative effects?

We can expect that the law will diminish, but not extinguish, smoking in cars while children are present. There is clear evidence from multiple settings that exposure to SHS in cars reduces after the implementation of smokefree car laws. 9 Smokefree car laws will also help denormalise smoking in other settings where children are present, thus further reducing SHS exposure and smoking in their presence. For example, after implementation of the 2004 Smokefree Environments Amendment Act mandating smokefree law bars, restaurants and other workplaces, the prevalence of exposure to SHS in the home reported by adults and children fell markedly, with similar or greater decreases among Māori. 10 11 It is also possible that the smokefree cars legislation may further denormalise smoking more generally and act as a trigger for people who smoke to try and quit.

Emerging evidence suggests reduced SHS exposure following the law’s implementation will very likely improve children’s health. For example, a paper published earlier this year found that hospital admissions for asthma among <5 year old children fell in Scotland after smokefree car legislation was introduced. 12 Because of the current inequities in children’s SHS exposure and the higher proportion of children in Māori and Pacific communities, the law is likely to reduce health disparities and result in greater health gains among these peoples.

The law should also reduce experimentation and subsequent initiation of regular smoking among children. Studies from Aotearoa show that exposure to smoking in the home and in cars is associated with increased adolescent smoking susceptibility and experimentation, and regular smoking. 7 13-16 This finding is particularly pertinent, given persisting disparities in smoking among adolescents; furthermore, recent ASH Year 10 surveys (most recent 2019) suggest the long-term decline in adolescent smoking prevalence may have stalled or begun to reverse (2021 data are keenly awaited). 17

The process of implementation influences whether policies and legislation achieve their intended impacts or lead to unintended adverse effects. Smokefree cars legislation is likely to work via its signalling and educative impacts. These will influence and change social norms; for example, they will make it much less acceptable to smoke in cars when children are present, and easier to request that people do not smoke in cars. An effective communication strategy is important to foster awareness of the law and its rationale, strengthen the measure’s legitimacy, and minimise non-compliance. A media campaign (‘Drive smokefree for tamariki’) developed by Te Hiranga Hauora/Health Promotion Agency and supporting community initiatives are underway to achieve these objectives.

The government have directed the police to use their discretion and use an educative approach to enforcement, and it is expected that fines will be a last resort. This approach should minimise any risk that the law inadvertently results in stigmatisation or criminalisation. Other countries provide excellent exemplars; for example, Ireland issued no fines for smoking in cars in the year following implementation of its smokefree cars legislation. Experience with the 2004 Smokefree Environment’s Amendments Act is also encouraging: non-compliance was (and remains) minimal and support for the smokefree policy progressively increased to very high levels after implementation. 11 However, there should be active monitoring of enforcement activities, as other situations where police discretion is encouraged (e.g. prosecution of low-level drug offences) have seen discrimination against Māori. 18

A comprehensive evaluation of the smokefree cars law is vital to identify whether proposed benefits fully accrue and if any adverse outcomes eventuate. The findings would provide evidence on which other jurisdictions contemplating similar legislation could draw. Unfortunately, NZ governments and ministries have a lamentable track record with respect to policy evaluation. We call on Associate Minister of Health Dr Ayesha Verrall and her Ministry to initiate baseline and ongoing data collection that enables robust monitoring and assessment of the new law. 9

Finally, what lessons should we learn from the experience of passing and implementing this legislation?

Sadly, the first lesson is that children’s health has not been prioritised by successive NZ governments. Whether caused by a lack of political will or powerful vested interests, delays in passing and implementing policies that protect children’s health, and reduce inequities, are totally unacceptable. We need a more systematic approach that accords children’s rights and well-being a much higher priority.19

Second, there is a strong case to introduce national legislation to protect children from smoking and SHS in other locations where they are generally present, such as shopping malls, playgrounds, parks and beaches. Currently, local initiatives attempt to provide this protection but because of the different approaches taken, coverage is highly variable and leaves many children unprotected.

Finally, although smokefree cars will help protect children from SHS exposure and reduce their likelihood of initiating smoking, it will not eliminate these risks. Even large reductions in adolescent smoking may simply shift smoking uptake to a slightly older age group, thus continuing the recruitment of “replacement smokers”. 20 To address this possibility, we need a comprehensive suite of measures that will achieve the Smokefree 2025 goal, and minimise adolescent and young adult smoking uptake.

Fortunately, the Government has proposed just such an action plan, and measures like denicotinisation of smoked tobacco products, greatly reduced retail availability, a smokefree generation policy, and banning design innovations and flavours that appeal to young people, are very likely to have the desired effect. We hope Cabinet will approve a final action plan that retains these pivotal policies, thus ensuring that Aotearoa becomes a place where children can truly grow up and remain smokefree.

*Author details: All authors are with ASPIRE2025 and the Department of Public Health, University of Otago Wellington.

Acknowledgements: We would like to acknowledge the many people who have provided the leadership and carried out the advocacy that has resulted in the introduction of the smokefree cars law. The list is long and includes: Dame Tariana Turia (Associate Minister of Health 2008-2014), Jenny Salesa (Associate Minister of Health 2017-2020, Bridget Rowse (Chair) and all the members of the National Smokefree Cars Working Group, Judge Andrew Becroft (Children’s Commissioner, 2016-2021) and community-based campaigns such as Leah Clark and the Wainuiomata #Tags team. We acknowledge the hard work of  many others who have played a major part and who space precludes listing here.

This entry was posted in Uncategorized and tagged smokefree cars, smokefree New Zealand by carra86p. Bookmark the permalink.