In this blog, we summarise our recent report that explores the health impacts from severe weather events, such as floods and storms, in Aotearoa New Zealand (NZ) for the past 70 years. Over this timeframe, there were 498 severe weather events recorded, of which 185 were linked with either injuries or deaths. In total, the deaths of 362 people were reported, and the most common cause of death was boating accidents. The health consequences of severe weather could increase with climate change – but fortunately there are a range of preventive measures available that could lower the harm from these events (eg, by reducing housing on flood plains and low-lying coastal areas). 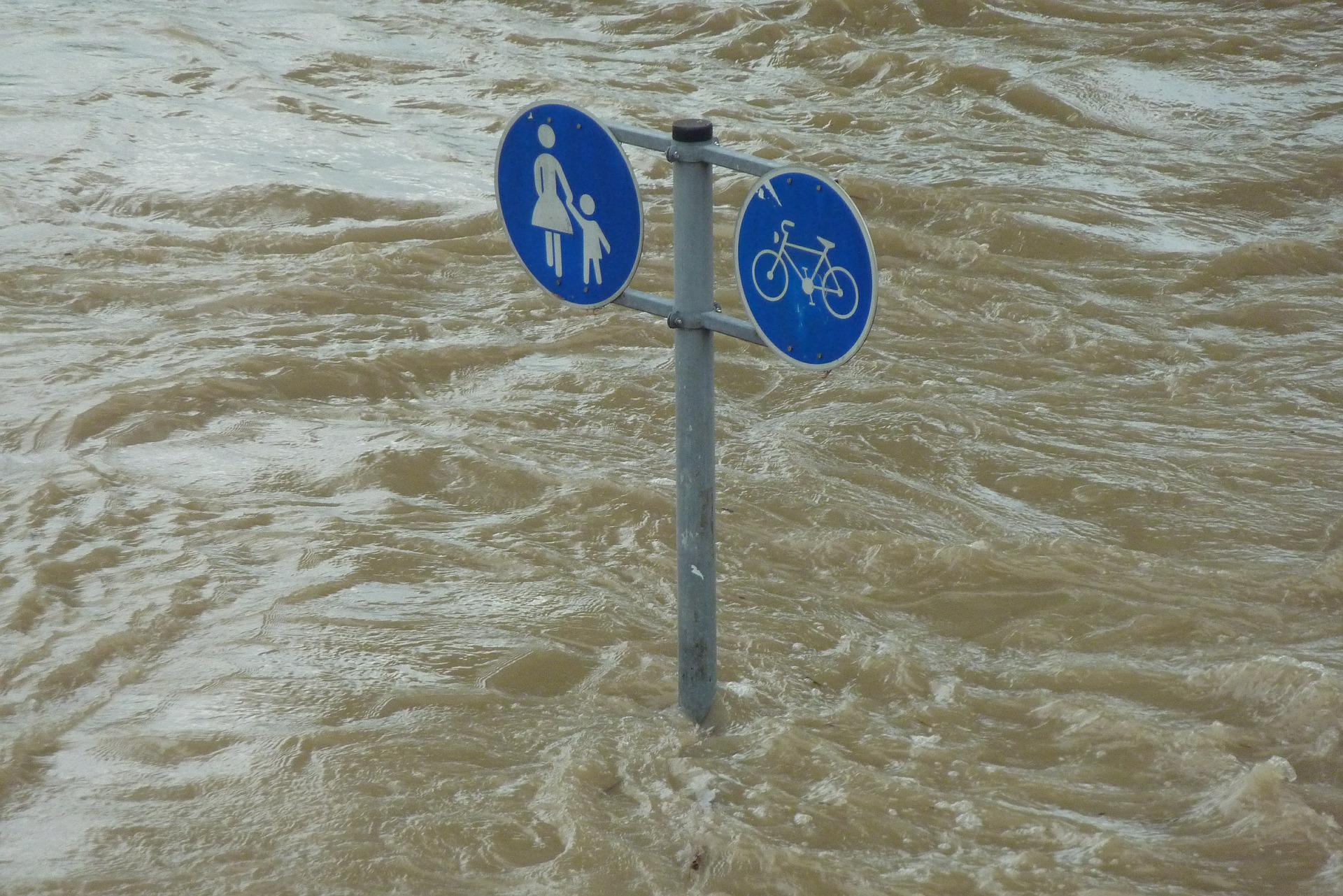 Image by Hermann Traub from Pixabay

The impacts of extreme climate events on human health can be severe, including deaths, illness, and injuries from heatwaves, droughts, floods, and storms [1, 2]. Globally, extreme weather events are expected to increase, and sea levels will continue to rise due to climate change [1, 2]. In NZ, increased rainfall intensity has been projected [3, 4], with fewer but more severe cyclones [3]. Extreme coastal flooding has also become more frequent due to sea-level rise along with high tides or storm surges in low-lying coastal areas [3].

These events can also indirectly influence people’s health and wellbeing through economic disruption (eg, cost of clean-up and repairs), infrastructure damage, and population displacement (eg, homes left uninhabitable due to flood waters or people unable to return to their homes temporarily due to hazards) [1, 5, 6]. In our recent report [7], we sought to explore patterns in severe weather events causing human injury since 1950 in NZ, and to identify other human impacts of these events, such as displacement from home, power cuts, road blockages, school closures, sewage-related problems, and boil water notices. We also estimated costs from severe weather events that are linked with injury.

As of 10 February 2022, there were 498 severe weather events in NZ for the period 1950 to 2022 in NIWA’s Historic Weather Events Catalogue, which collates information on major weather events from newspapers, journals, books and databases (Figure 1). Of these severe weather events, 185 (37%) were identified as being associated with any non-fatal injury or death (Figure 2).

While there appeared to be a drop in severe events during the 2010s, compared to the 2000s (Figure 1), this decrease was likely driven by a tightening of the inclusion criteria for severe weather events in the NIWA Catalogue in the 2010s decade. Overall trends may also be influenced by changes in media reporting over time (eg, interest in reporting on minor injuries), and also changes in criteria for hospital admissions (eg, for cases of mild hypothermia). In our full report we present a sensitivity analysis of the NIWA Catalogue compared to the Factiva media database, and what might need to be done in the future to more accurately assess trends over time in injuries from severe weather events.

Figure 1. Severe weather events for the period 1950-2022 in NZ as documented in the NIWA Catalogue and including those that were, and were not, associated with injuries (n=498) 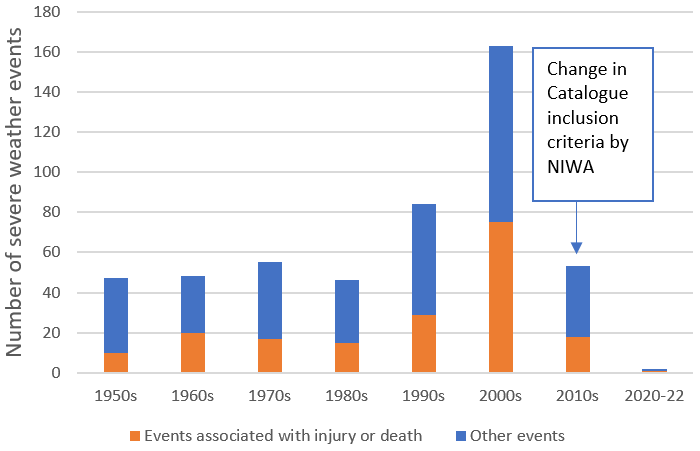 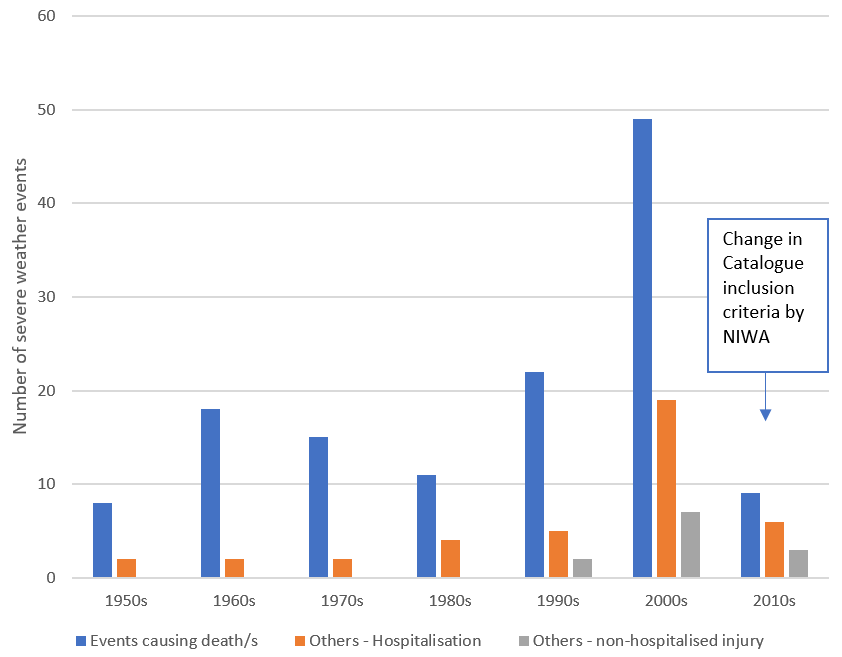 Of the 185 events linked with injury or death, most events (132; 71%) resulted in one or more deaths, and there was a total of 362 deaths reported (Table 1). The most commonly reported causes of death associated with severe weather events from 1950 to 2022 were: boat or ship accidents (39.5%; Table 1), vehicle accidents (16%), other drownings that weren’t linked with boat or ship accidents (15.5%), falling or flying materials (6.6%), and vehicle submersion when driving on flooded roads (5%).

Some severe weather events had large numbers of associated deaths. For example, Cyclone Giselle and the sinking of the TEV Wahine near Wellington caused 51 deaths on the day of the sinking [8]. Two more people died of their injuries afterwards, and another five deaths were attributed to Cyclone Giselle around NZ [8]. While boat or ship accidents were the most frequently reported cause of death, accidents involving large ships may be becoming rare due to improvements in technology (eg, more sophisticated navigation systems and weather forecasting). Also, more people are travelling by planes than ships. Indeed, a drop in transport-related fatal mass-casualty events in NZ was noted in previous research [9].

Table 1. Commonly reported causes of death for severe weather events in NZ for the period 1950-2022

Figure 3. Health burden from severe weather events (n=185) associated with injury or death for the period 1950-2022 in NZ 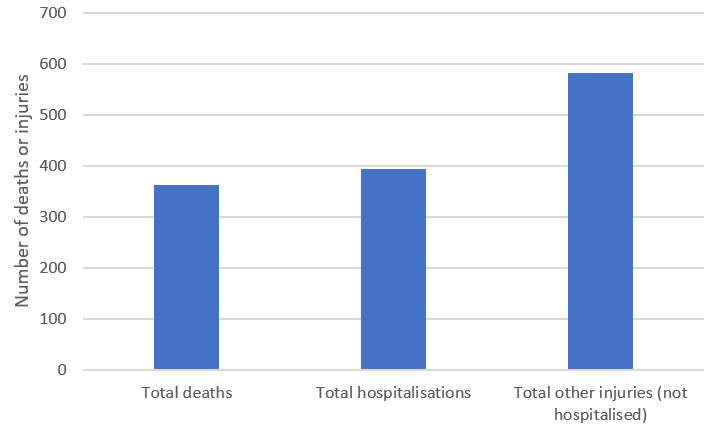 Out of a subset of 112 events with associated non-fatal injury or death from 1 January 1995 to 10 February 2022, 31 (28%) mentioned sewage issues (eg, sewage overflows) and nine (8%) mentioned that “boil water” notices were issued. At least four events caused sewage spills that led to public warnings to avoid swimming or collecting shellfish. 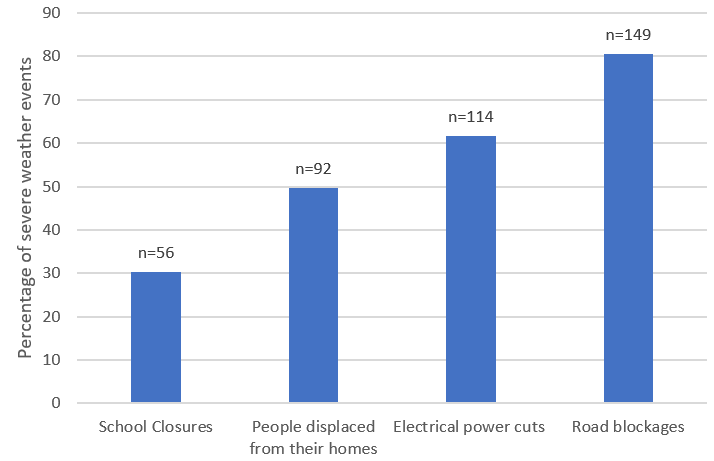 1 The totals given for each impact represent the number of events for which the impact was reported (ie, people were displaced from their homes during 92 severe weather events)

Several potential policy implications also arise from this study. According to the NZ Ministry for the Environment, flooding is the country’s most frequent natural hazard [10], and it has been estimated that around two-thirds of NZ’s population lives in areas prone to flooding [11]. As future climate change is expected to result in increased rainfall intensity and sea-level rise in NZ [3, 4], extra efforts are required now to prevent or mitigate flood risk. In particular, homes located in flood plains or in coastal areas that are susceptible to storm surges may need to be relocated. There may also be benefit in additional education to highlight the risks of driving or boating during severe weather events. For example, the NZ public should be regularly encouraged to check weather forecasts and make appropriate adjustments to their plans before boating.

Generally, the effects of severe weather events can be made worse by infrastructure failures. For example, consequences from storms can include injuries due to transport system damage (eg, collapsing bridges that lead to motor vehicle crashes) or electrical grid damage (eg, downed power lines resulting in electrocutions, or power outages leading to house fires due to the use of candles). Therefore, consistent monitoring of infrastructure and investment in improvements and repairs will likely benefit human health and wellbeing.

In summary, our recent work shows that severe weather events are a notable cause of injury and death in NZ. The overall health impact of such severe weather events is considerable and includes people being displaced from their homes, and extensive social disruption and economic damage. In the face of growing climate change impacts including projections of more frequent extreme weather, NZ needs to do more to prevent and manage threats to human health and wellbeing.

This entry was posted in Uncategorized and tagged Floods, Severe weather events, Storms by carra86p. Bookmark the permalink.