The public will soon have the opportunity to make submissions on the long-awaited Smokefree Environments and Regulated Products (Vaping) Amendment Bill (‘the Bill’) which will regulate vaping products and alternative nicotine delivery systems. In a previous blog, ASPIRE 2025 researchers summarised the strengths and limitations of the Bill, and concluded that it contained several important measures, yet could do more to protect the health of children, young people and non-nicotine users. This blog – intended as a follow-up article to further promote discussion – summarises emerging evidence of British American Tobacco’s ambitious plans for its nicotine products, and highlights the disjunction between tobacco companies’ profit goals and public health objectives.

The Ministry of Health’s approach to regulating vaping and alternative nicotine products (which we refer to as ‘next generation products’ or NGPs throughout this blog) recognises the need to achieve the best balance between these products and maximise their potential to “act as a route out of smoking for New Zealand’s 550,000 daily smokers, without providing a route into smoking for children and non-smokers.” The optimal outcome from a public health perspective is that vaping products help people stop using cigarettes completely, before they ideally quit using all nicotine products. At the same time as people who smoke switch to NGPs and then become nicotine-free, it is important that non-smokers, particularly youth, are not attracted to either NGPs or smoked tobacco products.

However, as we argue in this blog, the tobacco industry is likely to impede this outcome, which is inconsistent with their goal of profit maximisation. A recent report titled Addiction at Any Cost, published in February 2020 by the Stopping Tobacco Organizations and Products project, included information from recent British American Tobacco (BAT) presentations designed to promote their new nicotine products to investors and analysts.[1,2]  The content illustrates how BAT, at least, sees NGPs as an expanding market and a growth opportunity, rather than products to help people switch from smoking and then stop all nicotine use. BAT is the largest tobacco company in New Zealand; analysing this company’s strategies is pivotal to ensuring the Bill fulfils its purpose of taking a “balanced approach to the regulation of vaping and smokeless tobacco products” and protects public health and well-being.

Tobacco companies carefully frame their ‘reduced-risk products’ as intended only for adult smokers who would otherwise continue to smoke. This ‘harm reduction’ framing enables them to position themselves as legitimate stakeholders that are entitled to access policy-makers.

Yet BAT’s investor presentations suggest the company’s focus is on recruiting non-nicotine users to its novel nicotine products. For instance, a slide from a presentation dated October 2018 is titled “Nicotine consumer pool continues to grow” and notes an increase in the total number of nicotine consumers (users of smoked tobacco products and NGPs), following a sustained period when nicotine use declined, driven by NGP uptake (see Figure 1). 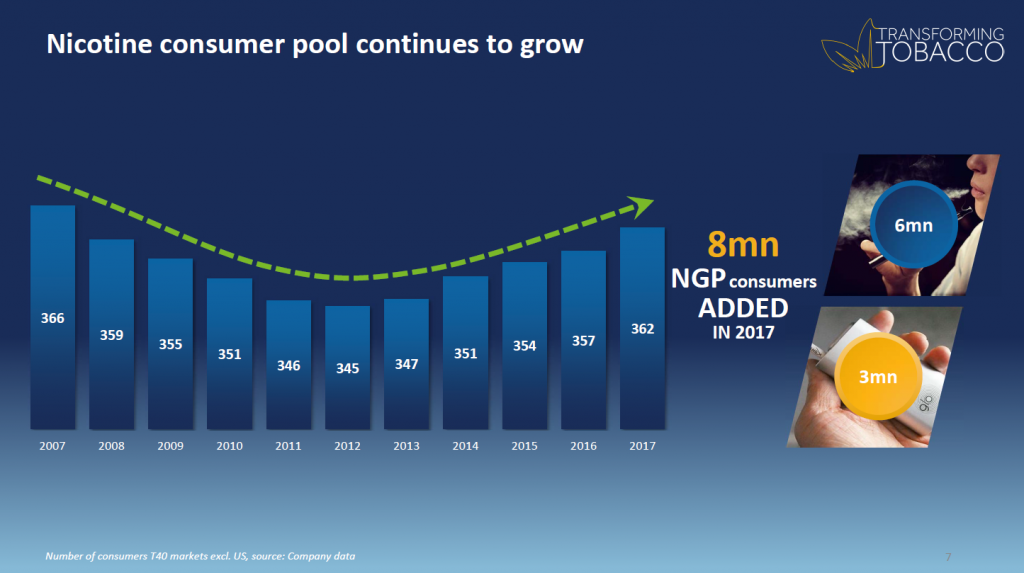 In March 2019, BAT reported an even larger growth in NGP consumers and explicitly attributed much of this growth to “entrants” (which they define as people “18+ or older entering nicotine category”). Figure 2 makes it clear that by “entrants” BAT means new nicotine users rather than “switchers” (i.e., those people who have changed from combusted tobacco products). BAT reported that most (58%) of the increase in people using e-cigarette (vapour) products was made up of new entrants (see Figure 2). Half of those using new “modern oral” nicotine products (which are new flavoured variations of traditional snus) were also new entrants, rather than people who had switched from combusted tobacco (Figure 2). These figures omit any mention of “new entrants” aged under 18 years, and thus are likely to underestimate the importance of this group. 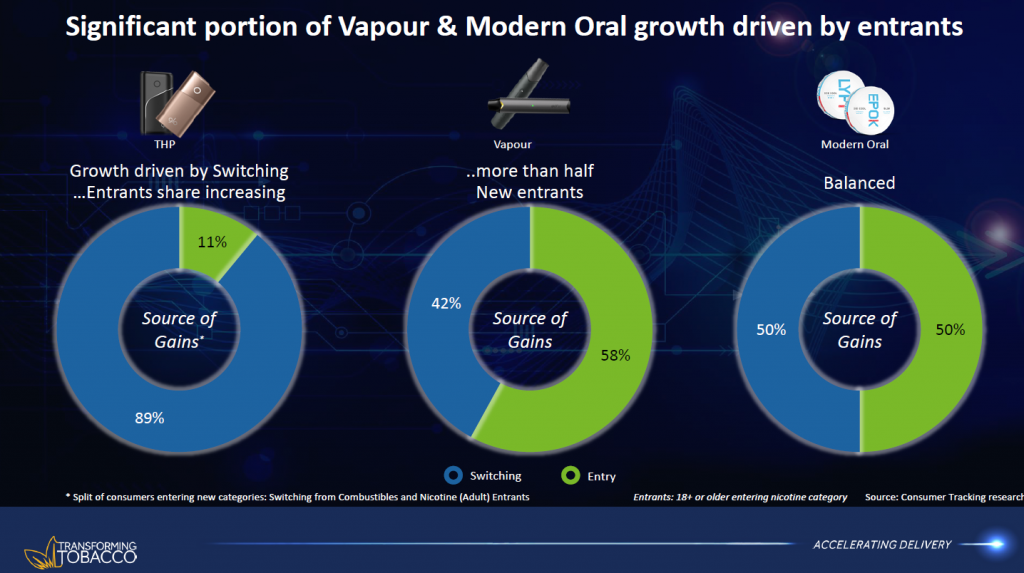 In New Zealand, the major tobacco companies have had only a limited window of opportunity to market NGPs, given these were, technically, not legal to sell until 2018. Yet BAT has already received criticism for its youth-oriented marketing of e-cigarettes in NZ.[3] Some school principals claim there is a concerning rise in youth e-cigarette use, and ever-use of e-cigarettes among Year 10 students (14 to 15-year-olds) increased to 37% in 2019.[4] Although the rate of youth daily e-cigarette use remains low, it too increased between 2018 and 2019, from 1.8% to 3.1%.[4] These findings suggest BAT’s “new entrants” in New Zealand will include a growing proportion of children aged under 18 years.

While BAT publicly assert that NGPs “can support smokers in quitting smoking”, their investor documents make no such claim. Instead, BAT appear to celebrate dual- and poly-use and the fact these patterns of use rarely result in complete switching (or “solus” use, in BAT’s words). BAT’s documents suggest dual- and poly-use are generally prolonged (i.e. “more than 6 months”), and increasing in prevalence (Figure 3). 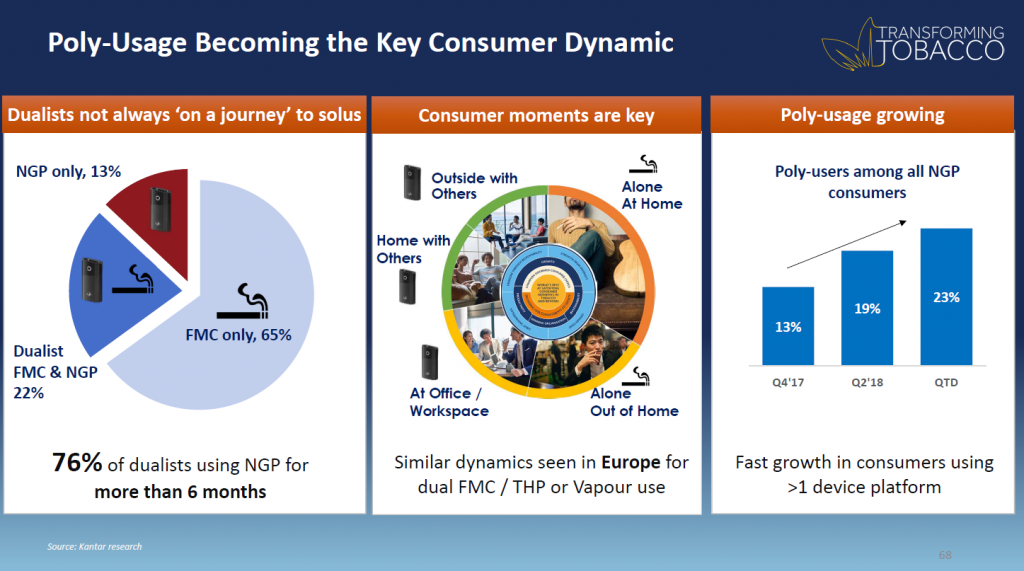 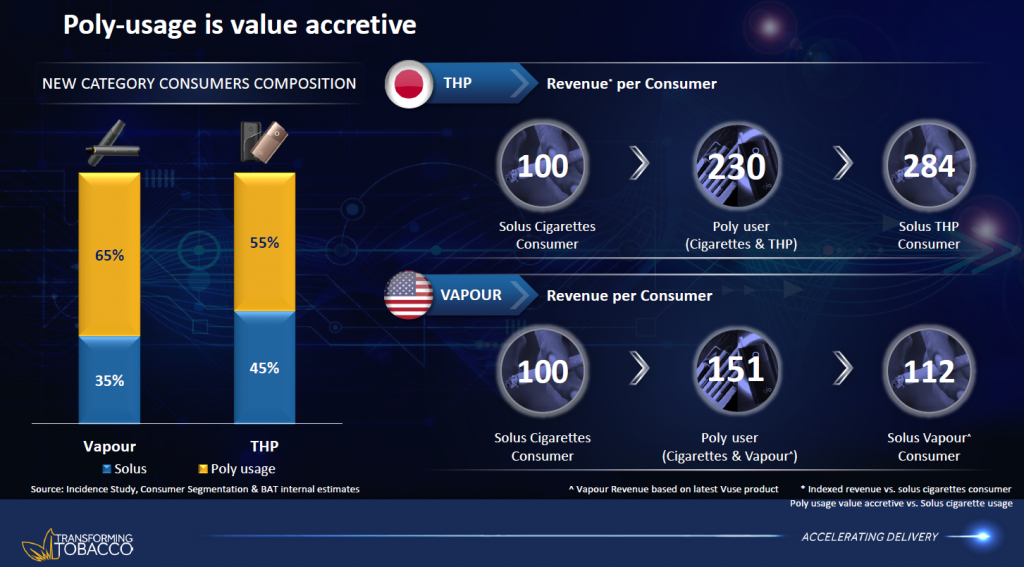 BAT describes heated tobacco and modern oral products as generating two to three times more revenue than cigarettes, which are already highly profitable products. The presentation shows that solus HTP consumers generate more than twice as much revenue as solus vapour (e-cigarette) consumers.[1,2] These figures suggest that tobacco companies such as BAT have more incentive to promote heated tobacco products than e-cigarettes.

BAT suggests that dual-use and poly-use are driving increased “moments” (Figure 5), defined elsewhere as “number of usage occasions” across all products.[2] This claim implies that poly-users switch between different products and devices throughout the course of the day, retaining their conventional cigarette at particular moments, yet choosing NGPs in settings where smoking is less acceptable, such as workplaces or when with others (Figure 5).  By expanding the settings where nicotine product use occurs, NGPs may increase overall nicotine intake, which in turn may increase nicotine dependence. 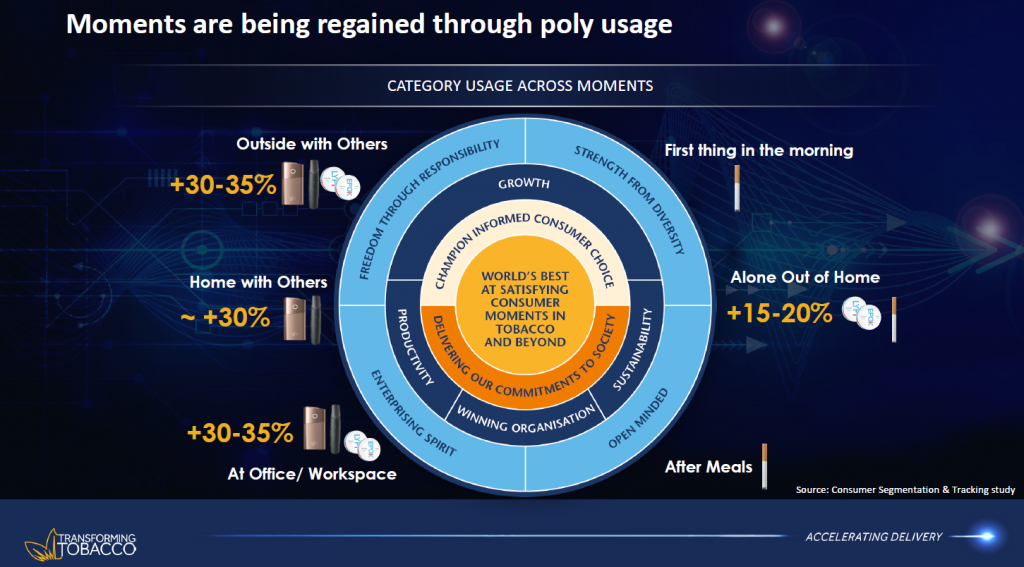 In short, these BAT presentations to investors raise serious concerns about BAT’s and the wider tobacco industry’s goals for NGPs. They suggest that BAT will seek to use NGPs to encourage poly-use; rather than to enable quitting; and that they will seek to increase the total number of users by attracting new users. Finally, within the NGP market the financial drivers work the wrong way – the fact that revenue from heated tobacco products is greater than revenue from vapour (e-cigarette) products means tobacco companies are incentivised to sell the more harmful option of the two. Products such as heated tobacco will enhance tobacco companies’ revenue but, crucially, may not greatly reduce the harms posed by combusted tobacco. Reducing the harm caused by conventional cigarettes remains a critical public health goal.  However, regulation must also recognise that NGPs are not a homogenous group of products and different products carry very different risks. A key priority for all health advocates is to ensure that the current Bill realises the potential for vaping products to contribute to reducing the harm caused by smoking and does not inadvertently serve the opposing interests of tobacco companies like BAT, which these presentations so clearly expose.

LR and AG are supported by Bloomberg Philanthropies under the Stopping Tobacco Organizations and Products project (www.bloomberg.org). The opinions expressed are those of the authors’ alone. The funders had no role in the conceptualisation or preparation of this blog. All authors declare no financial conflicts of interest. We wish to thank Andy Rowell for sourcing data.