This week a report, co-funded by Fonterra and MBIE, investigated the relative contributions of nitrate in our diet from water and food. The report comes in response to emerging epidemiological evidence observing nitrate in drinking water as a risk factor for colorectal cancer. In separate public statements, the authors concluded “it is highly unlikely that nitrates in drinking water or the diet present an increased risk of cancer.” In this blog, we explain why the evidence in this report is not sufficient to draw these conclusions by highlighting some key limitations. 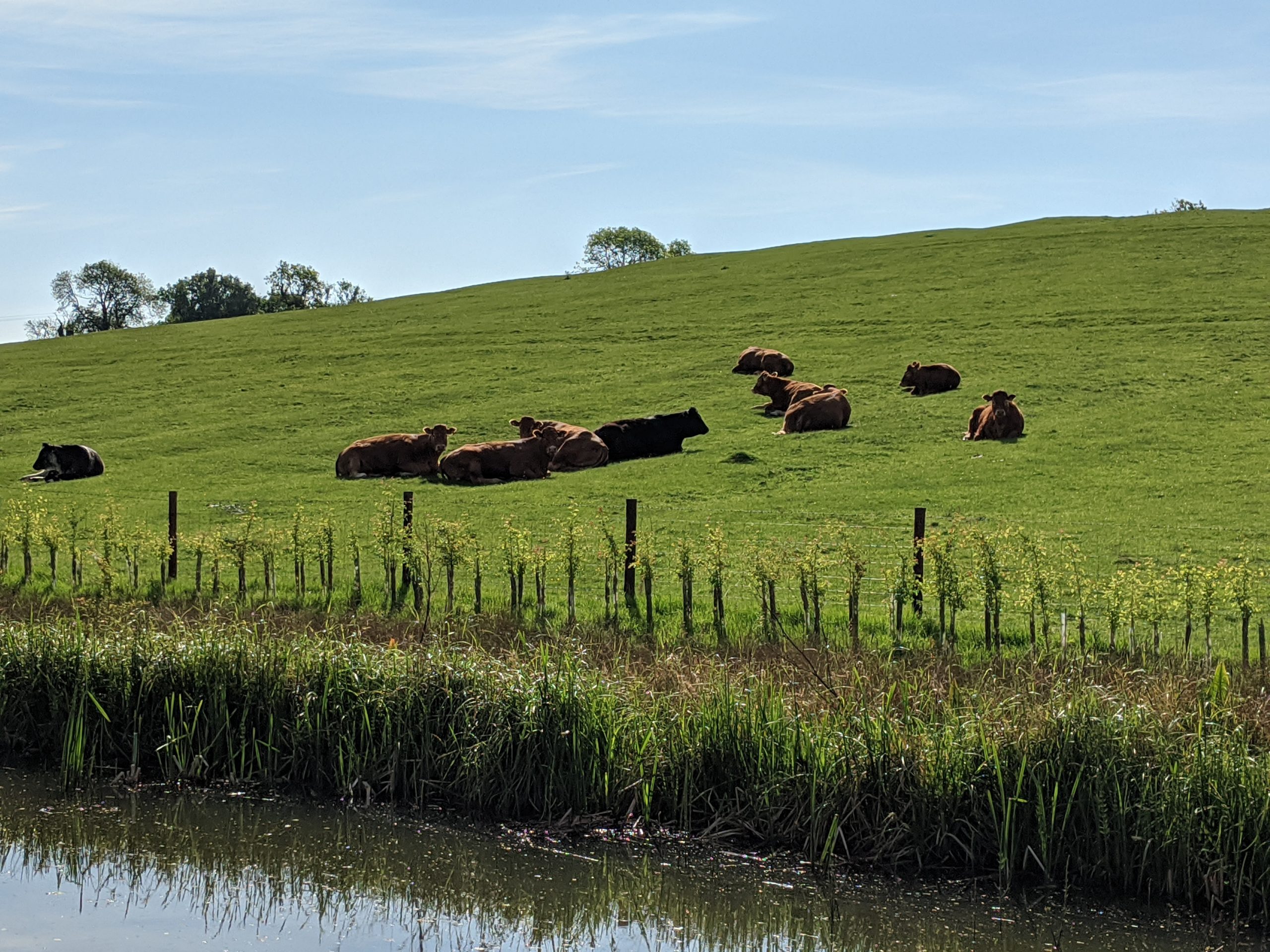 Photo by Simon James on Unsplash

A recent report co-funded by Fonterra and MBIE and commissioned by the New Zealand Food Safety Science & Research Centre aimed to investigate the relative contributions of water and food to New Zealanders’ overall nitrate intake [1]. The authors used collated data from international studies and New Zealand nutrition surveys from 1997, 2002 and 2008 to assess food-related nitrate and a subsample of water supplies to assess drinking water nitrate. The authors’ key conclusions include:

“it is highly unlikely that nitrates in drinking water or the diet present an increased risk of cancer” [2].

“the complete assessment suggests that there is little reason to differentiate between drinking-water and food nitrate exposure” [1, p32].

These conclusions are largely based on the relatively minor [~10%] contribution of drinking water to the average New Zealander’s overall nitrate intake. We believe that the research cannot justify such a definitive conclusions. In this blog, we outline some of the key limitations in the report and highlight where there are important knowledge gaps that need addressing by future research.

New Zealand has experienced rapid agricultural intensification since 1990 which has led to substantial nitrate contamination of drinking water in some areas. Recent epidemiological evidence suggests a link between ingested nitrate via drinking water and increased cancer risk, with the best evidence for colorectal cancer [3]. The lowest nitrate level where an association with colorectal cancer was observed was in a large Danish cohort study which found exposure to 0.87mg/L nitrate-nitrogen increased cancer risk [4]. However, other studies only observed associations at much higher levels [5-8], while one cohort observed an inverse relationship, albeit not statistically significant [9,10]. The emerging epidemiological evidence is a concern given rising levels of nitrate contamination of water in parts of New Zealand [11], and the contribution of the agricultural sector to the country’s exports and wider economy.

Importantly, the authors acknowledge the likely biological pathway for ingested nitrate increasing the risk of cancer, via N-nitroso compounds, a class of cancer-causing chemicals [12]. However, they do not specifically mention the overall conclusion of the International Agency for Research on Cancer (IARC). IARC’s 2010 review of studies up to 2006 concluded that:

“ingested nitrate or nitrite under conditions that result in endogenous nitrosation is probably carcinogenic to humans (group 2A).” [12, p325].

The process of endogenous nitrosation is complicated and is influenced by gut microflora and dietary factors (especially the balance of red meat, which can increase nitrosation and fruit and vegetables which can reduce it). The interplay of these factors determines the synthesis of N-nitroso compounds. There is evidence that antioxidants, particularly Vitamin C, may inhibit nitrosation [5,6]. This may explain why a large number of studies show fruit and vegetable consumption reduces colorectal cancer risk despite its high nitrate concentrations [13]. However, there is limited evidence around what level of antioxidants is required to counteract or inhibit nitrosation and the duration of protection that follows a meal.

The authors’ first key assumption in their analysis is that any nitrate from drinking water that is consumed with any meal or as another beverage [eg, coffee] poses zero risk to human health due the associated antioxidants inhibiting nitrosation. As mentioned, a key research question yet to be answered is what level and frequency of antioxidant intake is required to nullify endogenous nitrosation for any given level of nitrate ingestion? Unfortunately, without a considered analysis of this key question, the analysis in this report cannot accurately assess the potential risk of nitrate in drinking water consumed at meal times. A related issue is that many meals likely have very few antioxidants and there would be differential consumption patterns across the population. This research question is particularly pertinent given the role proteins and haeme from red meat play in endogenous nitrosation [12]. Red meat consumption is now well established as a cause of colorectal cancer [12], in part via genetic damage that can be linked specifically to nitrosation [14].

The second major decision made in this report was to assess the risk to the average New Zealander served by a community water supply. The authors excluded unregistered water supplies, which are most at risk of nitrate contamination. The nitrate in drinking water dataset utilised in this report had a distribution of 0.3mg/L [median], 1.1 mg/L [mean] and 4.5mg/L [95th percentile] nitrate-nitrogen. Assessment of people at minimal risk of nitrate contamination is not particularly informative or relevant to assessing the potential burden of nitrate contaminated water in New Zealand. Our previous research has stated that there is little to no risk for people under 1mg/L based on the epidemiological evidence and the proposed mechanism [15]. Thus, it would be preferable to focus analyses on the ~800,000 people with higher levels of exposure to nitrate contamination via drinking water that epidemiological evidence suggests are at greatest risk. The lead author later estimated in a presentation that ~50% of overall nitrate consumption could come from drinking water for those people close to the Maximum Acceptable Value of 11.3mg/L nitrate-nitrogen [16].

The third major decision was to focus the analysis around the acceptable daily intake (ADI). While this may be a useful parameter in most instances, the process we are concerned with centres around the imbalance of antioxidants and nitrosating agents as a result of nitrate ingestion.

The authors concluded that:

“the complete assessment suggests that there is little reason to differentiate between drinking-water and food nitrate exposure” [1, p32].

This is inconsistent with IARC’s recommendations and review processes that explicitly state:

“sources from vegetables probably result in less endogenous formation of N-nitroso compounds because of the presence of inhibitors of nitrosation. For these reasons, the Working Group evaluated ingested nitrate from dietary sources and drinking-water separately” [12, p111].

From an epidemiological perspective, food-based exposure is unlikely to drive any differential bias in the exposure assessment. The authors concluded that there is remarkable consistency between countries in relation to nitrate consumption from food and that within New Zealand “Exposure to nitrate from food will only be moderately influenced by geographical location” [1, p19]. This suggests that in New Zealand, spatial differences in nitrate exposure may depend mainly on levels in drinking water. Another important development to understand would be the factors that changed the authors conclusions from a previous paper using similar data:

Finally, the authors disclose the report was commissioned by the New Zealand Food Safety Science & Research Centre using funding from Fonterra and MBIE. When there are potential conflicts of interest, it is important to state the funder’s role in the formulation, design and review of the research process and results. A preferable model for the agricultural industry to contribute to health research would be to donate the funds to the Health Research Council.

Increased research on this important health issue of nitrate in drinking water is a positive development. The authors of this report have identified some key areas for future research and provide a useful hypothesis generating analysis. However, we have highlighted in this blog there some major limitations to their analyses. We believe the research aims and analysis were never designed to justify the conclusions in their report or public statements.

* Dr Chambers and Prof Simon Hales are from the Department of Public Health, University of Otago, Wellington.