A just published study examined the lifespan of politicians in 11 high-income democratic countries – including Aotearoa New Zealand (NZ). The NZ politicians were found to live at least 5 years longer than the general NZ population (age and gender matched) and this gap has been growing since 1950. One of the likely reasons is the lower smoking rate of NZ politicians compared to the rest of the population. Perhaps it is time for NZ politicians to share the lifespan benefits of their smokefree lives – by ensuring that the current smokefree legislation before Parliament is passed in full? 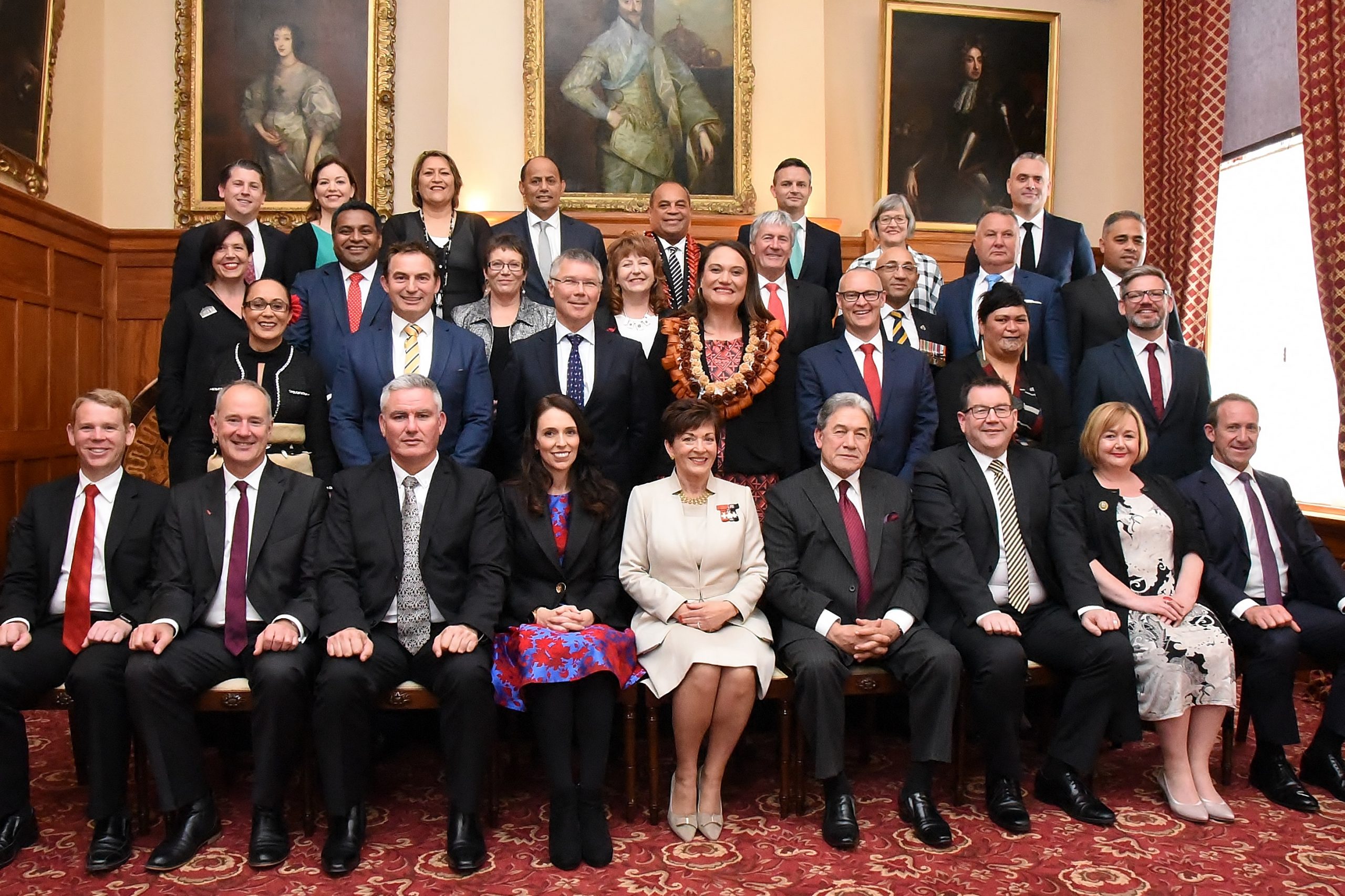 A just published study by Clarke et al1 examined the lifespan of 57,561 politicians in 11 countries where data were available from 1816 to 2017 (Australia, Austria, Canada, France, Germany, Italy, the Netherlands, NZ, Switzerland, the United Kingdom, and the United States [US]). They found in their observational study that “in almost all countries politicians had similar rates of mortality to the general population in the early part of the twentieth century”, but that “survival differences (favouring politicians) increased considerably over the course of the twentieth century”. In some of the studied countries, relative inequalities “are at the greatest level in over 150 years”, with the US standing out in this regard.

There were 889 NZ politicians included in this study from the NZ House of Representatives (ie, Members of Parliament), with 14% being female (note: the first female MP in NZ, Elizabeth McCombs, was elected in 19332 and currently, females make up ~48% of Parliament3). The cohort included NZ politicians first elected in the year 1891 and there was follow-up to the year 2014 (by which time 513 [57.7%] had died).

The results for the NZ politicians (both genders) show that their mortality rate was equal to the rest of the NZ population around 1950, but has declined faster since then. In recent years it has been 18% lower (specifically a standardised mortality ratio [SMR] of 0.82 [95% confidence interval [CI]: 0.69 to 0.95]). This SMR value of 0.82 represented one of the smallest differences with the rest of the population in this group of 11 countries (after Switzerland at SMR=0.84) and the inequality was worst for Italy (SMR=0.45) and then the US (SMR=0.56).

For male NZ politicians the extra life span from age 45 compared to the general population since the 1970s ranged from 5.0 to 6.4 years (Fig. S8 in Clarke et al). But the equivalent data for NZ females was actually a negative gap (ie, higher life span in the general female population than for female politicians) but this was not a statistically significant difference and was based on relatively small numbers (Fig. S10 in Clarke et al). In contrast most of the other countries did show significantly higher life spans for the female politicians (see the figure below – which shows the maximal differences that have typically occurred in the last decade). 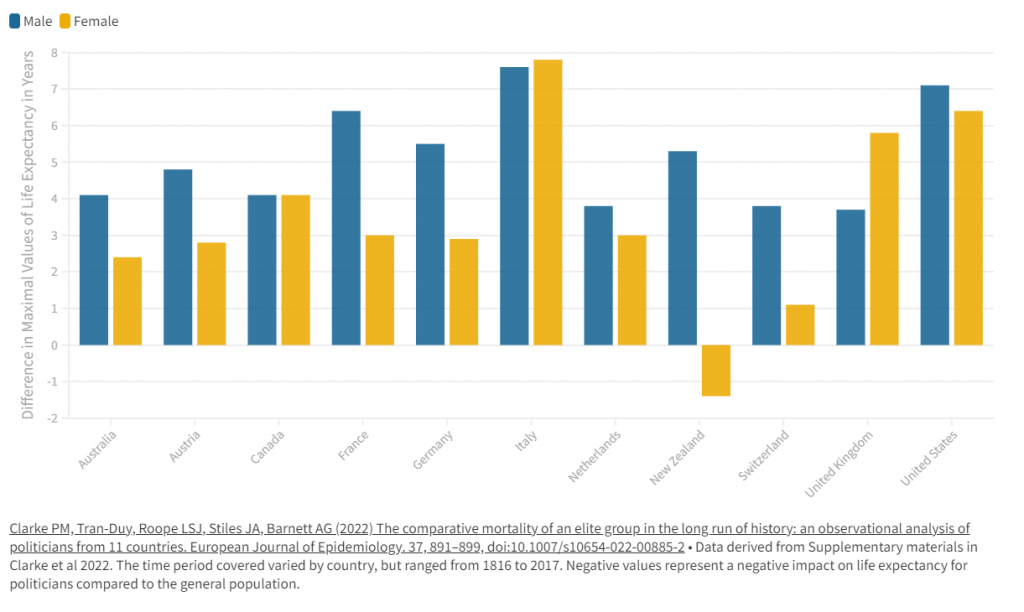 One of the reasons for this life span gap suggested by Clarke et al is the likely lower smoking rates by politicians. Another factor mentioned was potentially better access to treatment services – such as treatment of high blood pressure. Higher incomes and better education may also play some role.

We suspect that the smoking factor is particularly relevant in the NZ setting as per a study on smoking by occupation group.4 It showed much lower smoking levels by NZ Parliamentarians in 1981 and 2006 and a slightly faster decline in smoking in the 1981 to 2006 period (see Table). Furthermore, since 1950 none of the 16 Prime Ministers and only two of the 19 Deputy Prime Ministers in NZ seem to have smoked tobacco (based on a Google Image search of photographs of these politicians).

What does this study mean for NZ?

The lifespan inequalities shown here for NZ politicians vs other Kiwis are not surprising given what else is known about such inequalities for NZ. For example, absolute differences in life expectancy between high- and low-income groups in 2001 were 6.5 years for males and 4.7 years for females.5 The gradients are strongest for income, but are also seen by small area deprivation and education.6 7 There are also notable ethnic health inequalities8 9 and these have been described over very long periods of time.10 11 In 2013 there was a Māori vs non-Māori gap of 7.3 years for male life expectancy and 6.8 years for females.12

Reducing these gaps will continue to require a wide range of societal inventions to reduce inequalities in income, wealth, education, occupational status and to eliminate racial discrimination. But one single important step is to reduce smoking. One analysis found that if nobody in NZ smoked tobacco from 2020 onwards, additional gains in life expectancy for Māori ranged from 2.5 to 7.9 years (average 4.7) and for non-Māori it ranged from 1.2 to 5.4 years (average 2.9 years).13 This highlights the need for the NZ Government to progress its Smokefree Action Plan.14 So perhaps it is time for NZ politicians to share the lifespan benefits of their smokefree lives – by ensuring that the current smokefree legislation before Parliament is passed in full?

This entry was posted in Uncategorized and tagged life expectancy, smokefree, Smoking and politicians by cooju60p. Bookmark the permalink.