Just published results from the NZ Health Survey indicate ongoing declines in smoking for Māori and for European New Zealanders. In this blog we comment on the possible reasons for these trends and describe recent work on how progress could be accelerated.

Just published results from the NZ Health Survey indicate recent ongoing declines in smoking, with a graph below of the trends since 2012 (tabulated data in the Appendix). These downward patterns are consistent with long-term trend data from other sources such as the Census [1] and declining cigarette sales data. 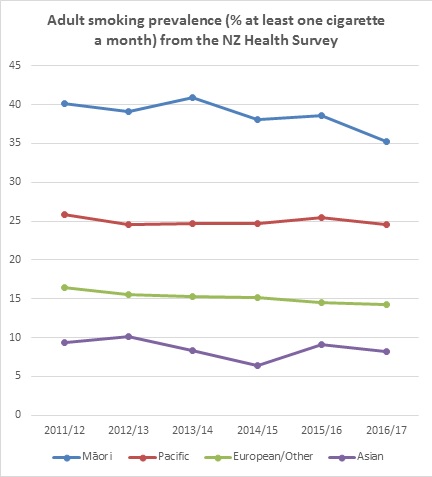 We plan to do more detailed analyses of these trends and update our past work [1] when next year’s Census results are available. But in the interim we note that the declining patterns are partly driven by the relatively stronger downward results for the most recent survey (and while the changes are generally statistically significant, not all are, e.g. not for: Pacific peoples, Asians, and some older age-groups). We also note (from the online data) that the largest declines have occurred amongst the 15-24 and 25-34 year age groups. This suggests that a relatively important part of the reduced smoking prevalence is due to reduced uptake (as opposed to quitting).

However, there is considerable published work that suggests that these downward trends arising from these business-as-usual activities are markedly insufficient to achieve the Government’s Smokefree 2025 goal [3, 4, 10-13]. Furthermore, these trends are definitely not adequate to achieve <5% smoking prevalence by 2025 for Māori and Pacific peoples. This is why an evidence-based framework for making accelerated progress and addressing disparities in smoking was produced by researchers (with support from the tobacco control sector) earlier this year – as detailed in this report on “Achieving Smokefree Aotearoa by 2025” [13], and this blog on the topic.

We encourage the new government to consider this plan – and other recent publications relating to advancing tobacco control in New Zealand [4, 5, 14]. Also, given the new government’s interest in poverty reduction – the role of tobacco use in generating both poor health and poverty should be given particular consideration. One aspect of this is that when tobacco tax is next increased, this action should be accompanied by a strong media campaign and enhanced quitting support services so as to maximise the impacts of price rises on smoking cessation rates and therefore reduce financial impacts of ongoing smoking. Furthermore, the extra tobacco tax revenue should be ploughed back into enhancing support for smokers to quit, as well as media campaigns and other tobacco control initiatives, so as to help create a supportive environment for quitting and staying quit. Alternatively, the extra tax revenue could go to contributing directly to poverty reduction initiatives, such as providing healthy lunches in schools in deprived areas.

So while the ongoing (but modest) decline in smoking is good for public health, now is a time for a new government to take a fresh look at potential interventions to greatly accelerate this progress.

Appendix: Tabulated data used in the figure (prevalence in % of adult current smokers from the NZ Health Survey [see elsewhere for details on statistically significant differences])

This entry was posted in Uncategorized and tagged e-cigarettes, Smokefree Aotearoa 2025, smoking, tobacco control by dayhi34p. Bookmark the permalink.