The Government announced the Healthy Families NZ initiative to tackle our escalating obesity crisis. It will be based on Healthy Together Victoria (HTV) which the Health Minister, Tony Ryall, visited on a recent trip to Australia. Although no details are available, it is pertinent to ask – what is HTV, how could it be adapted for New Zealand, and will it work? 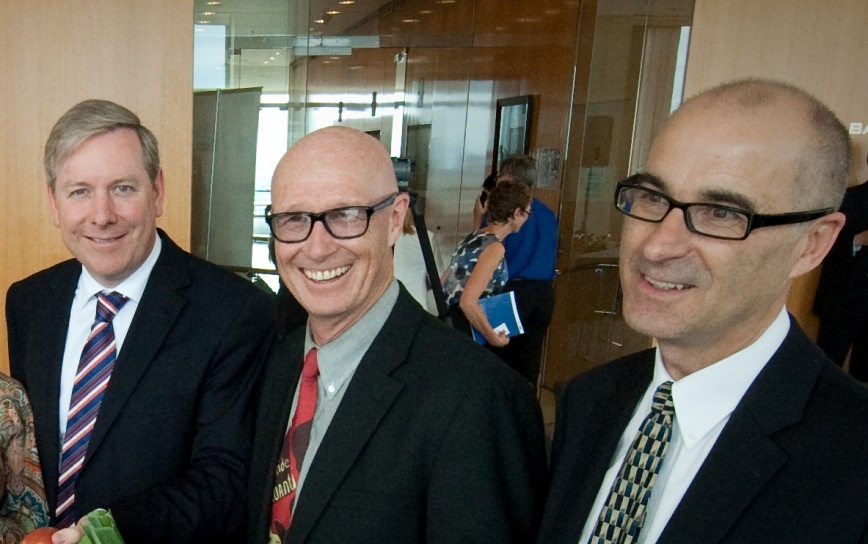 The launch of Healthy Together Victoria: Victorian Minister for Health, Hon David Davis, Prof Boyd Swinburn, Dr Alan Shiell, CEO of the Centre for Excellence in Innovation and Prevention Systems which is evaluating HTV. 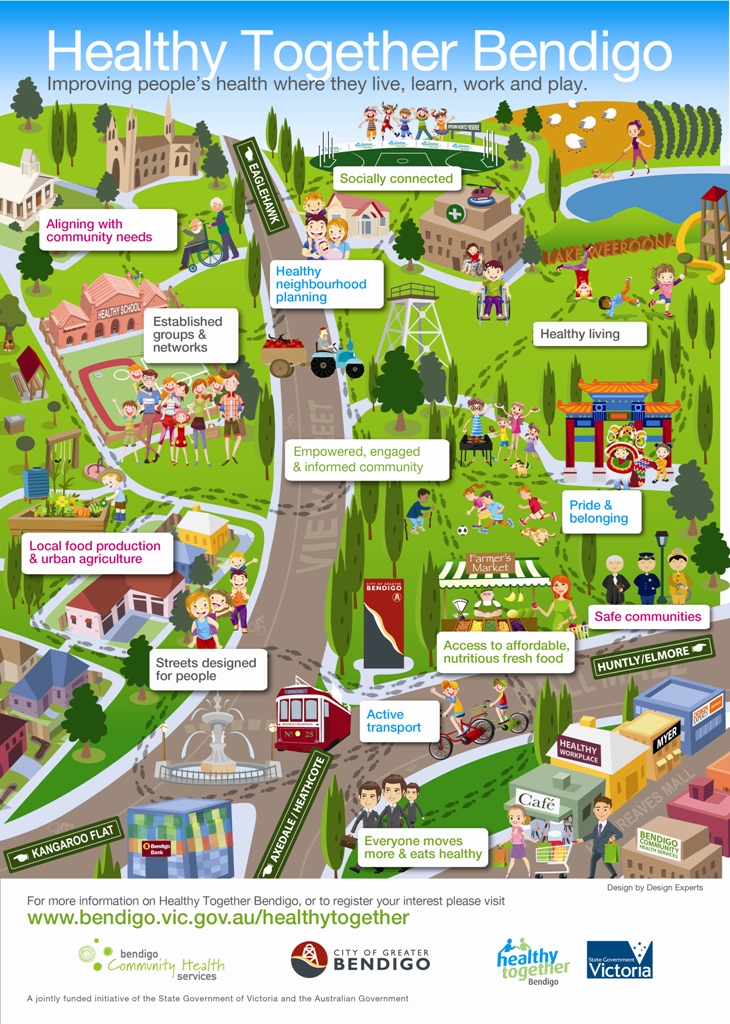 Representing the activities taking place in the city of Bendigo

Election year certainly focuses the political minds on which current problems and solutions to put into an election platform and, in health, the failure to address obesity is a biggie. Two out of three adults are overweight or obese which puts us just behind the US and Mexico at the top of the OECD table. But our childhood rates are more shocking – about one in three are classified as overweight or obese (compared to Australia’s one in four), it is steadily increasing (while many OECD countries, including the US, are flattening or declining), and the disparities are very wide. The Government is heavily exposed to criticism for this national failure because of its concerted inaction on obesity, even to the point of pulling the plug on the comprehensive Healthy Eating, Healthy Action plan.

So what is HTV? It is a state-wide, systems-oriented, long-term, locally-implemented initiative which is Victoria’s approach to a national initiative to create healthier workforces and communities, reduce the cost burden on health services and thus improve Australia’s economic performance. The national investment in this prevention effort is almost AUD 1 billion over 9 years – not a lot of money for a country that size and over that time, but a good shot in the arm for cash-starved prevention services.

In my opinion, HTV is the international leader in large-scale, community-based, health promotion approaches to obesity prevention for five main reasons. First, its vision is large-scale and long term with a view to converting it into a true ‘prevention system’ over time. Second, its ‘systems approach’ is all about reorienting existing organisations and systems rather than delivering programs and activities. In schools for example, the new on-the-ground workforce does not implement programs with children or create curriculum, but works behind the scenes with principals and school boards to stimulate the schools’ systems to be more promoting of healthy eating and physical activity. While this has always been part of traditional health promotion, training people to predominantly ‘see and think’ systems and work ‘in and on’ systems allows a step up in the scalability, synergies and sustainability of changes. While ‘systems’ sounds airy-fairy, just ask a principal to draw a picture of the food systems in schools and you will get a detailed insight into why the current system is delivering the food it does to children and where the leverage points for change are. Third, it has very visible and strong leadership from the Health Minister, David Davis, and a highly dynamic and driven bureaucracy, led by Dr Shelley Bowen. I am naming them specifically because individual champions really matter in getting things done. Fourth, it is a serious investment in prevention with over 100 new positions sited within 12 high-need communities as the ‘systems-activators’. Fifth, it is highly evidence-informed and evidence creating. Its proof of principle came from several long-term community initiatives which I led in the 2000s in and around Geelong. But more importantly, HTV is investing in evaluation and it has been set it up such that the 12 high-investment communities can be evaluated against matched communities which do not have the on-the-ground positions. The random allocation within pairs to HTV investment means a robust cluster comparison is possible. 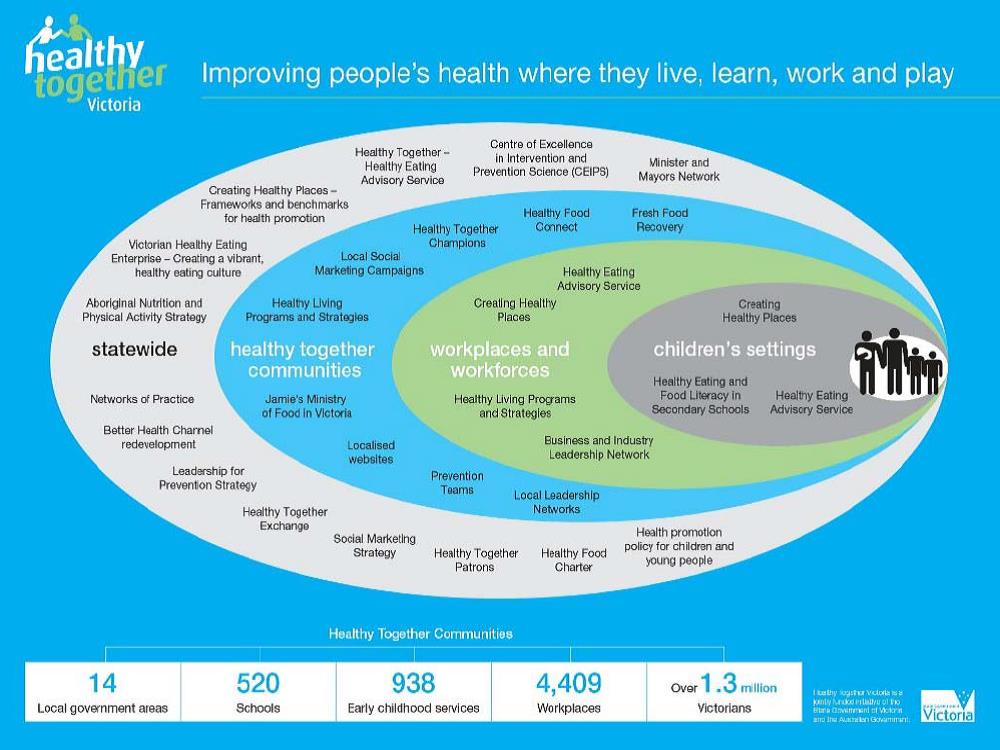 Will it work? If the characteristics which make HTV an international leader are built into the New Zealand model, then, yes, it can definitely work. Will this community-based approach, by itself, be enough to bring childhood obesity down to acceptable levels? My opinion is no. To get to that point we will need two other planks of action: serious policy and regulatory actions to reduce the obesogenicity of our environments, especially our food environments, and a strong focus on culturally-centered approaches to specifically address the very high rates of obesity in Pacific and Maori children. That is the trifecta that we should be aiming for to turn New Zealand from laggard to leader in obesity prevention.

This entry was posted in Uncategorized and tagged healthy eating, healthy families nz, healthy together victoria, HPV by Kate Sloane. Bookmark the permalink.

One thought on “Obesity at last on Government agenda, but will Healthy Families NZ be good enough ?”