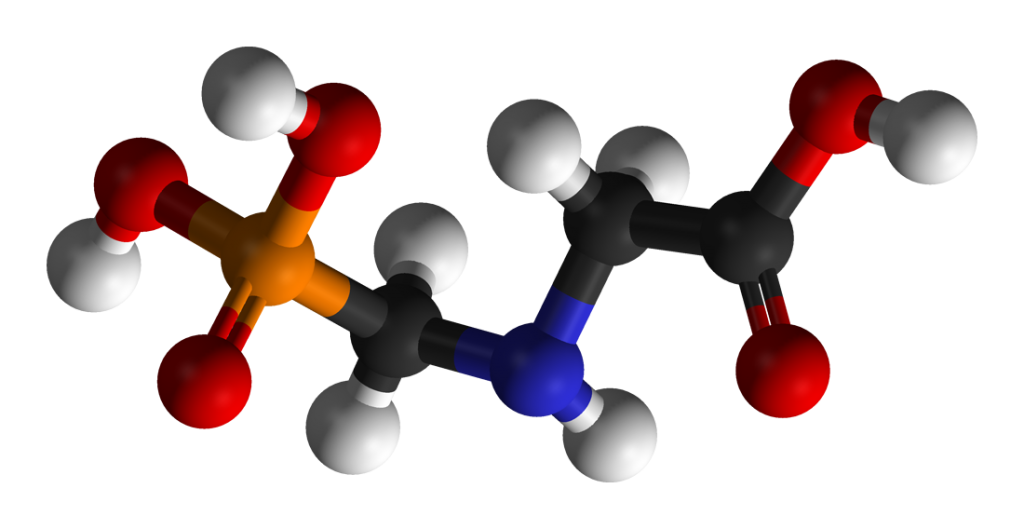 Glyphosate is an organophosphorus compound and the most widely used herbicide in the world. In New Zealand, glyphosate is found in approximately 90 products, of which the best known is “Roundup”, produced by Monsanto.

In 2015, the International Agency for Research on Cancer (IARC) gathered 17 scientists from 11 countries to assess the carcinogenicity of the pesticides tetrachlorvinphos, parathion, malathion, diazinon, and glyphosate. The IARC Working Group concluded that, for glyphosate, there was “limited evidence” of carcinogenicity in humans, based on limited epidemiological evidence for a positive association for non-Hodgkin lymphoma, and “sufficient evidence” in experimental animals for the carcinogenicity of glyphosate. The working group also considered potential mechanisms for induction of cancers and concluded there is strong evidence that glyphosate is genotoxic and can act to induce oxidative stress, based on studies in humans in vitro  and studies in experimental animals [1,2]. Taking the human, animal and mechanistic data together, the Working Group concluded that glyphosate is “probably carcinogenic to humans”.

IARC has been conducting assessments of carcinogenicity for more than 40 years – the glyphosate assessment was published as Monograph 112 in the series. The purpose is to establish whether agents are cancer hazards i.e. whether they have the capacity to cause cancer, using a standard grading system (1 = carcinogenic to humans, 2A = probably carcinogenic, 2B = possibly carcinogenic, 3 = not classifiable, and 4 = probably not carcinogenic). The criteria for each grade are highly specified; the selection of experts is based on skill mix and research experience relevant to the agent being assessed; there are explicit processes to manage possible conflicts of interest amongst those participating in the assessment; and the rules of evidence are clear – assessments are based on publications in peer-reviewed journals and publicly available government documents on the circumstances and extent of human exposures [3].

The New Zealand Environmental Protection Authority (EPA) decided not to accept the IARC assessment on glyphosate, and instead commissioned its own report. This was written by Dr Wayne Temple, a toxicologist and formerly Director of the National Poisons Centre, and published in August 2016 [4]. The aim of the EPA review was the same as the IARC assessment, to review the evidence for carcinogenicity in humans, but the conclusion was different – “glyphosate is unlikely to be genotoxic or carcinogenic to humans”.

In July 2017, the Green Party released the findings of an investigation into the EPA actions on glyphosate, and raised the following concerns: 1) there was no evident justification for rejecting the IARC assessment; 2) the EPA review was scientifically deficient in several respects*; 3) the Ministry for Primary Industries apparently had a strong hand in shaping the report; 4) the EPA received unspecified inputs to the review from Monsanto; and 5) the EPA ignored the Ministry of Health which notified the Authority it could not support the process that was being followed [5].

Dr Jacqueline Rowarth, Chief Scientist at the EPA, has appeared on radio and in the press to answer the questions raised by the Green Party report. In our view, her defence of the EPA is unconvincing.

What rules of evidence were applied to the EPA assessment? Dr Rowarth argues that the EPA needs to cast the net more widely in carrying out its assessment, beyond the evidence accepted by IARC, including exposures, usage and implications of regulation, but the basis for doing this is unclear. “We do go to all sources because remember there is an economic implication within the use of glyphosate” and “We need to be able to consider everything otherwise we are not taking the net benefit approach” says Dr Rowarth [6]. These wider issues are relevant to policy, but certainly have no bearing on the scientific assessment of whether a chemical has the ability to cause cancer or not.

Why were the findings different? Rowarth says “We agree with them [IARC] – at high exposures and dosages, cancer could occur but we don’t have these high exposures and dosages in New Zealand” [7]. So, does the EPA truly agree with the IARC assessment, that glyphosate can cause cancer? Not according to the document written by Dr Temple, which concludes the chemical is “unlikely to be carcinogenic” and says nothing about exposures and dosages that apply in New Zealand. On what basis has Dr Rowarth concluded that certain exposures are safe (i.e., do not increase cancer risk)? We are not convinced our current knowledge on the carcinogenic effects of glyphosate in humans allows any conclusions to be drawn on safe levels. And where do the figures on glyphosate exposures in the New Zealand population that Dr Rowarth refers to come from? Are these available for scrutiny? We are not aware of any reports that are available in the public realm. Was the information on exposure and doses provided by Monsanto? If so, were the figures verified by EPA and how?

The questions that arise from the work on glyphosate are important in their own right, but they also have broader implications for evaluations of other hazardous substances. This is particularly critical now that the EPA is about to undertake a large-scale review of hazardous substances in New Zealand. These are the issues that warrant closer attention in our view: 1) the relations the Authority has with industry and what steps are taken to manage conflicts of interest; 2) the implications of the Ministry of Health’s lack of confidence in EPA’s processes – see page 181 of Bruning and Browning [5]; 3) the lack of clarity in EPA communications about the steps taken in assessment of hazardous agents (which typically proceed from hazard identification to exposure assessment to risk characterization); 4) when and why a small country like New Zealand should undertake its own hazard assessment in place of work done by much better resourced and experienced agencies overseas such as IARC, and 5) the inappropriate application of “net benefit” thinking to the front end of risk assessment and management.

The glyphosate muddle needs to be sorted because it is necessary that New Zealanders have confidence in the decisions taken by government agencies to identify and regulate hazardous substances.

Footnote: * Bruning and Browning note particularly that the NZ EPA report considers just “glyphosate chemistry and not glyphosate-based formulations that are used in ‘the real world’ and that are obviously of the essence”; that it “makes every effort to discredit a finding by the NZ EPA’s own authority on cancer, the IARC”; that it “appears to give exclusive consideration and weight to industry-paid and industry-supported studies and reviews as well as arguably out-dated and industry-developed guidelines”; that it ignores the NZ EPA’s own manual ‘Thresholds and Classifications under the HSNO Act 1996’ where IARC is listed as “one of the two respected sources for information on carcinogenicity”; and finally that it “fails to address twenty-first century scientific understanding of the factors that pre-dispose to risks of cancer development – ignoring new data from toxicology and cancer biology.”