In this blog we comment for a second time this week on the consultation draft of the NZ Health Strategy, focusing this time on preventive interventions that actually would make a meaningful difference to health in Aotearoa NZ. The draft Strategy has many strong aspects, but by having a ‘people centred’ approach it gravitates to IT systems and individual-level actions, and drifts away from population-level prevention activities that would have the biggest health impact (a goal of the strategy), reduce health inequalities (another goal of the strategy) and be best value for money (yet another goal of the strategy). We recommend that the word ‘prevention’ needs to be more than a garnish sprinkled through the document, but rather an actual substantive item on the menu of offerings. We conclude by offering up some interventions for comparison, and note that the population-wide interventions not highlighted in the Strategy can have an impact on health gain and costs (savings) far in excess of those implicitly in the Strategy’s focus.

The current Health Strategy is 15 years old; time for a refresh. Minister Coleman says many good things in his foreword to the just released Consultation Draft, including:

“… there is an emerging consensus that working intersectorally will help address those drivers of ill health that sit outside the health system.”

“Engagement with the sector to develop a picture of what the future might look like resulted in a greater emphasis on health education and prevention to reduce future demands.”

But by the time the draft Strategy has traversed its five organising themes (1. People powered, 2. Closer to home, 3. Value and high performance, 4. One team, 5. Smart system), the gravitational pull of a focus on health service systems and people-centric approaches leaves the 20 identified Action Areas at the conclusion bereft of actions that actually have a big impact on population health – in our view, and as we also commented on earlier this week. More on that in a bit.

There are definitely some good bits in this Draft Strategy. It should, and does, consider how to embrace and maximise use of IT systems, smart thinking, health services coordination, and such like. All good and necessary stuff. The problem is that the big drivers of ill health (obesity, tobacco, income-adequacy, etc) fall off the table. Why? We do not know. It could be that it is just too hard in a Strategy document to tackle the elephants in the room (sugary foods, the Food Industry, tobacco) when the most important policy actions on these items are issues of Politics (with a capital ‘P’). Or it could be that the – generally sensible – five organising themes naturally lead to ‘within the health system’ actions, activities for DHBs and citizens – not activities for the state through ‘collective action’.

So what is missing? Well, as per our previous blog there are plenty of key causes of health loss that are not adequately covered, including some that have no mention at all. The lack of any mention of the Smokefree 2025 goal is particularly surprising.

So let’s look a bit more at what should be more to the forefront in the Strategy. First, note that the Minister in his Foreword emphasises prevention, and that the document talks (at length) about health gain, productivity and value for money. So, below we present just a handful of the (growing list of) interventions we have modelled in the BODE3 Programme (University of Otago), estimating health gains (as quality adjusted life years) and costs for interventions. We have ranked them by health gain, or quality adjusted life years (QALYs), for the remainder of the 2011 NZ population’s life. 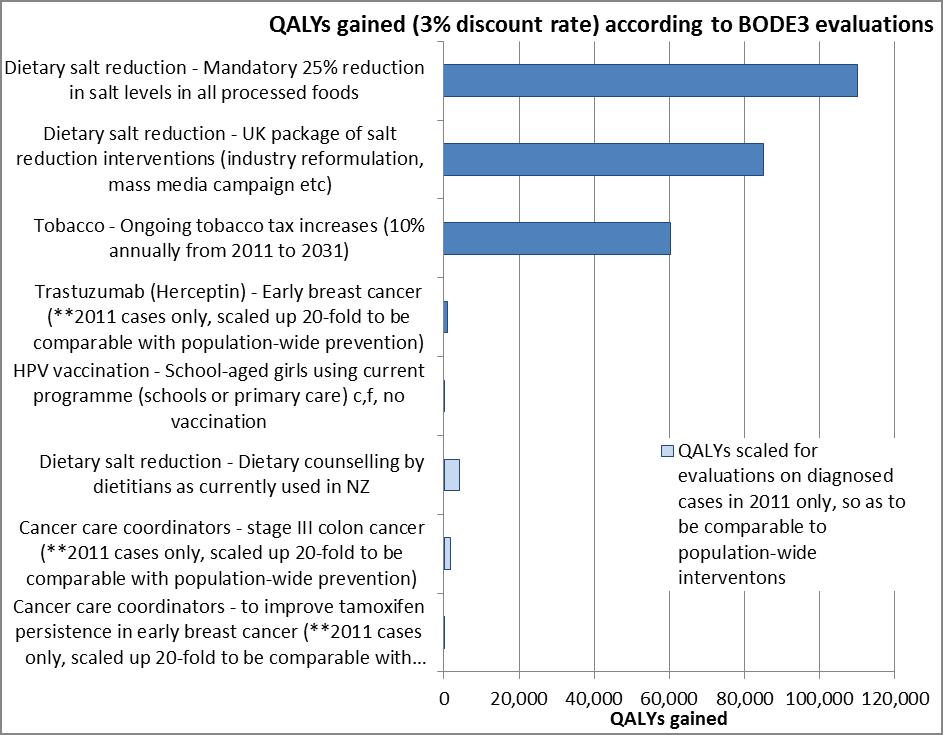 Many of the health service interventions are not even visible in the figure above, so we plot them again on a log scale – now giving a relative comparison of QALY gains. The gains from interventions such as population-wide salt reduction and tobacco tax dwarf those for Herceptin and cancer care coordinators. (To put these numbers in perspective, the mandatory 25% reduction in salt levels in all processed foods gains 110,000 QALYs, which is equivalent to a gain of 0.6% in the expected QALYs left to live among all 35+ year olds alive in 2011). But we need to be careful in the comparisons. Most importantly, the preventive interventions are for the whole 2011 population followed to death or age 110 years, with the QALY gains often occurring decades into the future (although the QALY gains are discounted at 3% per annum). In contrast, the treatment interventions are just on the cases diagnosed in 2011. This is a function of the modelling, so to try and make for a ‘fair’ comparison, we scaled up the treatment-type (and HPV vaccination which is just for girls aged 12 in 2011) by 20-fold, which allowing for a 3% discount rate is roughly similar to modelling that treatment intervention on the 2011 population every year into the future. Even with this scaling, the population-wide interventions stand out. 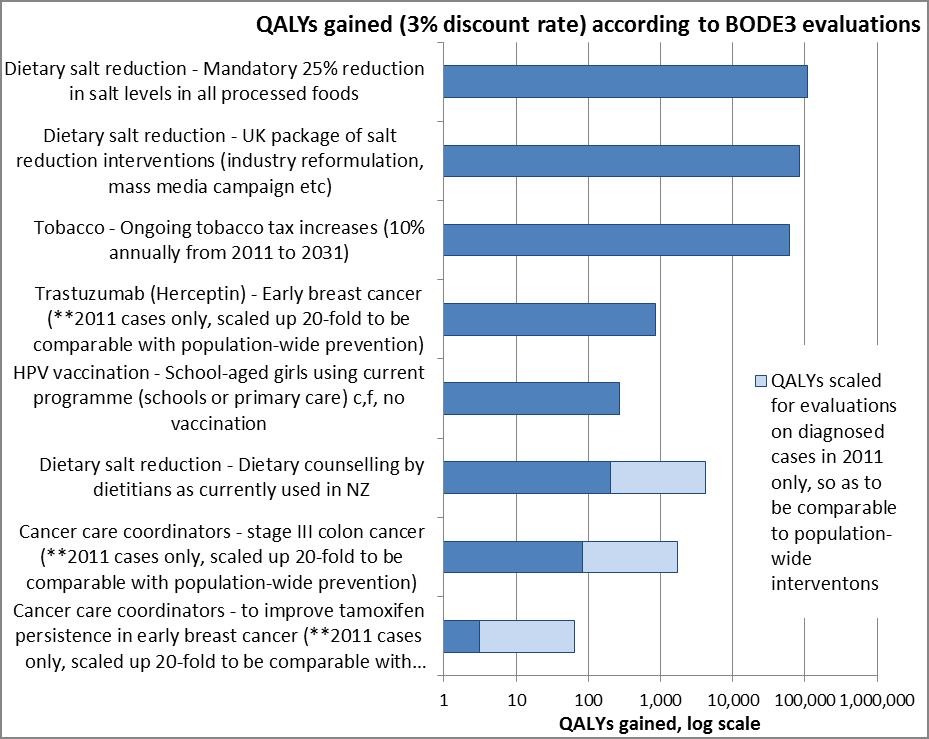 There are many nuances to consider in the above graphs. For example, how interventions differ in their ‘benefit’ and ranking if, say, one limits the time horizon for benefit to the next 10 to 20 years (favouring treatment interventions), what discount rate one uses, and so on. We will visit these considerations in future blogs and publications. But for now, the point is that the current Draft Health Strategy is excluding mention of interventions with the biggest impact – on a long timeline at least.

What about cost-effectiveness? Or the cost per QALY gained? The graph below shows the incremental cost-effectiveness ratios (ICERs) for the same interventions above. First, for completeness we show as negative ICERs those interventions that are cost saving; one may elect to just consider these interventions as ‘cost saving’ or ‘dominant’. Why are some of the interventions (massively) cost saving? (E.g. see this blog on dietary salt reduction interventions). Because they prevent disease, preventing future health system expenditure – or perhaps more accurately allowing health expenditure to move to other areas (e.g. dementia care). But from an economic perspective, a perspective included in the current draft Health Strategy, (massive) cost savings – even if decades into the future (not unlike the projected benefits of other major Government expenditure, e.g. roads) – are hard to ignore. 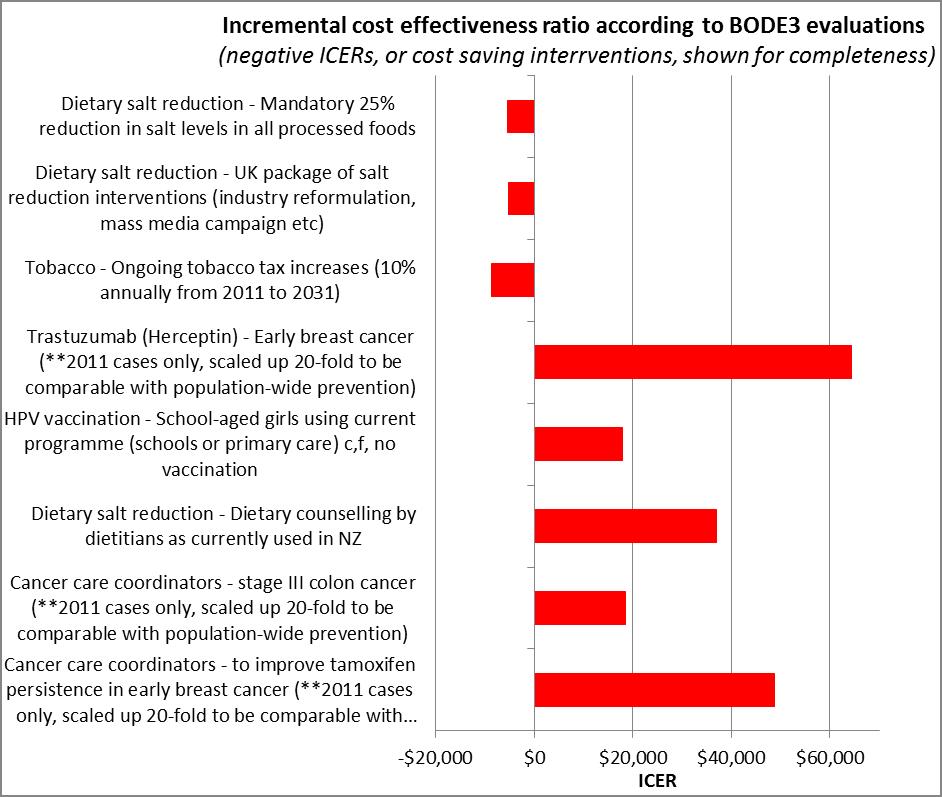 Considering the positive ICERs, Trastuzumab (Herceptin) appears to be on the cusp of cost-effectiveness. (However, cost-effectiveness varies enormously by age and receptor subtype – paper under review.) Cancer care coordinators might be deemed a good buy, and this is indeed an area that the NZ Government has been investing in. HPV vaccination of girls is also a good buy (and is current practice in NZ) by usual criteria – albeit not cost saving like population-wide salt and tobacco interventions. Notably, not all salt interventions are cost saving – dietary advice costs money per QALY gained, an example of how personalised interventions are often (not always) less likely to be cost saving than population-wide interventions through regulation or other means.

Yes, there is plenty of nuance to consider in the above comparisons – and we will explore these more in the future. The unavoidable point here though, and in light of the draft Health Strategy Consultation, is that it seems erroneous – and poor economic sense – to not forefront population-wide prevention more.

To conclude, we recommend the following revisions of the Health Strategy:

This entry was posted in Uncategorized and tagged NZ Health Strategy, prevention, QALYs by Kate Sloane. Bookmark the permalink.