A panel of 71 independent and government experts have undertaken an evaluation of New Zealand Government food environment policies, compared to international best practice.  This is the second such evaluation, the first being in 2014.  In this blog we summarise the findings. There are some areas where New Zealand is at the level of best practice and there are some areas where there is progress compared to 2014. However, there remain major implementation gaps, especially for policies to improve the healthiness of food environments, to catch up with other nations globally in tackling the child obesity crisis.

According to a 2017 OCED Report New Zealand is still the third fattest high income country both for children and adults (1), which means no progress since 2014 (2). It is critical that the New Zealand Government starts implementing widely recommended preventive policies (3, 4) to match the magnitude of the burden that unhealthy diets are creating. While some progress has been made in policy implementation since 2014, overall, New Zealand is significantly behind international best practice for implementing such policies. This is the main conclusion from the second Healthy Food Environment Policy Index (Food-Epi) (5) conducted in New Zealand in April-May 2017.

The Food-EPI followed a rigorous, evidence-based process to determine the extent of implementation of food environment policies by the NZ Government compared to international best practice: 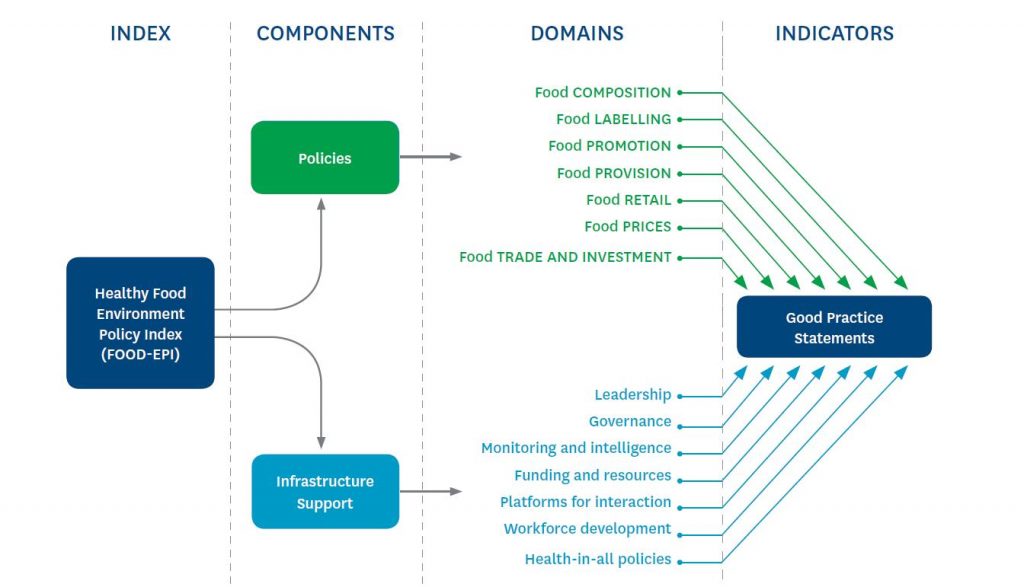 Key highlights from the 2017 Food-EPI

NZ doing well at the level of best practice for:

The expert panel recognized progress since 2014 for:

As a result of the evaluation, experts derived nine priority recommendations.

1. Strengthen the Childhood Obesity Plan, including policy objectives and targets to reduce obesity prevalence and inequalities, and more and stronger policies to create healthy children’s food environments, and increasing funding for the implementation and evaluation of the plan.
2. Set targets for
a. reducing childhood overweight and obesity by 8 percentage-points (from one-third to one-quarter) by 2025 with decreasing inequalities (11).
b. reducing mean population intakes of salt, sugar & saturated fat based on World Health Organization recommendations.
c. voluntary reformulation by food industry of composition (salt, sugar & saturated fat) in key processed food groups that are major contributors to sodium and sugar intakes, consistent with international best practice targets.
3. Increase funding for population nutrition promotion to at least 10% of obesity/overweight health care costs (i.e. about $90 million per annum).
4. Regulate unhealthy food marketing, as defined by the WHO nutrient profiling model, to children up to 18 years:
a. in broadcast media, including during children’s peak viewing times (e.g. up to 9pm)
b. in non-broadcast media, including food packaging, sport sponsorship and social media
c. in children’s settings, including ‘school food zones’.
5. Ensure healthy foods in schools and early childhood education services using the updated Food and Beverage Classification System.
6. Introduce a substantial (e.g. 20%) tax on sugar-sweetened beverages and explore using the revenue for programs to improve public health and wellbeing (see recent blog on mechanisms).
7. Strengthen the Health Star Rating System by urgently addressing anomalies in the design algorithm (especially for sugar), increasing funding for promotion and making it mandatory for packaged foods if there is not widespread uptake by 2019.
8. Implement the new Eating and Activity guidelines by increasing funding for their promotion and translating them for New Zealand’s social, environmental and cultural contexts.
9. Conduct a new national nutrition survey for children within 3 years and institute a plan for future regular adult and children nutrition surveys.

In conclusion, there are some areas where New Zealand is at the level of best practice and there are some areas where there is progress compared to 2014. However, there remain major implementation gaps, especially for policies, still to be addressed to improve the healthiness of food environments in New Zealand and to be able to catch up with other nations globally in tackling the child obesity crisis.