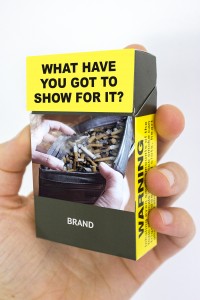 The Prime Minister’s decision to progress plain packaging legislation “sooner rather than later” is an important step towards our smokefree 2025 goal. There are four key areas for improving on Australia’s legislation to maximise the effectiveness of plain packaging:

We welcome the Prime Minister’s recent announcement that the government intends to progress plain packaging legislation sooner rather than later. New Zealand will now join the many other countries implementing this proportionate and evidence-based policy, and benefit from the declines in smoking prevalence to which plain packaging has contributed. Studies from New Zealand have shown how on-pack tobacco-brand imagery appeals to young people and positions smoking as an accepted, even aspirational, behaviour (1-3). Results from Australia clearly support our government’s decision to progress plain packaging sooner rather than later. Professor Melanie Wakefield and her team in Australia have shown that plain packaging has sharply reduced the appeal of smoking among both adults and adolescents (4-7). Furthermore, a recent analysis of plain packaging’s effects undertaken by the Australian Government shows plain packaging has made significant independent contributions to reductions in smoking prevalence, as predicted (8).

Furthermore, our recent work has estimated that plain packaging would have a similar overall effect as a five percent price increase from a tobacco excise tax rise (9), without imposing an extra financial burden on low-income smokers. A group of smokers identified in our study was willing to pay around $3.00 per pack more to obtain a branded pack with a less impactful warning compared to a plain pack with a strong health warning. Evidence that this particular group was less likely to have made a recent quit attempt suggests plain packaging could promote cessation attempts among smokers who have been less willing to try and quit, thus expediting achievement of the smokefree 2025 goal. Overall, our latest studies provide important new evidence that plain packaging will not only deter smoking initiation (its primary objective), but also stimulate cessation among smokers.

Yet while Australia’s thoughtful and comprehensive legislation provides a superb model, it also represents only the starting point of plain packaging policy, and New Zealand’s law and regulations should extend and improve upon what Australia implemented. Recent work undertaken by the ASPIRE2025 collaboration suggests improvements could occur in four crucial areas. First, we should ensure our regulations prevent the proliferation of brand variant names (or descriptors) that occurred in Australia (10). As Scollo et al discuss, Australian tobacco companies expanded the style and number of variant names featured on their brands to ameliorate the effect of removing brand imagery. Our work shows variants influence smokers’ brand choices and, the greater the number of descriptor names used, the more attractive smokers perceive the pack to be. Given all tobacco products are uniquely harmful, there is no justification for allowing the use of variant names that enhance the appeal of brands. Plain packaging represents an opportunity to remove descriptors completely or, at the very least, to disallow the introduction of descriptor terms that were not already in use when the legislation passed its first reading in 2014.

Plain packaging also offers the opportunity to refresh and extend the pictorial warning labels in use since 2008. Initially introduced to increase smokers’ awareness of the health risks smoking causes, new evidence suggests health warnings lack salience for some smoker groups, particularly young people who may see the health risks presented as irrelevant and exaggerated (11, 12). Health risks presented in on-pack labelling typically depict illnesses that occur after many years of smoking. Because many young people believe they will quit smoking before facing serious health risks (12), these warnings often have little impact. By contrast, warnings that depict the effects smoking has on others, especially children, appear to have more influence on a substantial proportion of young people (13, 14). Because smokers are not a homogenous population, it is important to ensure warning labels feature diverse messages that are regularly refreshed. 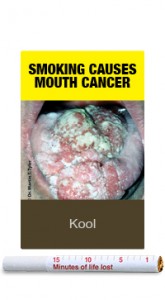 Plain packaging rightly recognises that tobacco packages have functioned as a “silent salesperson”; however, although smokers display packages, they consume cigarette sticks. Unlike the tobacco industry, researchers have paid surprisingly little attention to the design and appearance of cigarette sticks. However, we recently tested how smokers reacted when sticks were presented in unattractive colours and featuring warning messages (15, 16). Each of the sticks designed to be dissuasive was significantly less appealing and less likely to be selected in a choice experiment than a standard white stick with a brown filter tip. A stick featuring a graphic showing the minutes of life lost while smoking had the strongest dissuasive effects. Featuring this graphic on cigarette sticks and rolling papers seems unlikely to present any implementation problems, given tobacco companies already feature imagery on cigarette sticks.

Each of the measures we have proposed above would diminish the experience of smoking, reinforce the increasingly negative connotations associated with smoking, and generate dissonance among smokers. For this reason, we suggest it is also important to use plain packaging to foreground cessation information and facilitate access to quitting support. Although tobacco packages currently feature the Quitline number, this information is arguably hidden in plain view. We tested the effects of reformatting Quitline information and identified a design that performed significantly better than the current pack design on every communication measure examined (17).

Experimental and qualitative evidence, together with the detailed evaluations now emerging from Australia, show that plain packaging will bring important health benefits.  However, to catalyse progress towards the smokefree 2025 goal, we suggest the New Zealand Government augment Australia’s legislation by incorporating the new, best practice, ideas we have outlined. We look forward to the Government announcing a timeline that will see plain packaging legislation passed by May 31 this year, World Smokefree Day, which is dedicated to promoting the adoption of plain packaging.

One thought on “New Zealand Can Lead the World in Tobacco Control: Plain Packaging 2.0”