From tomorrow (11 August 2021), Aotearoa New Zealand’s Smoke-free Environments and Regulated Products (Vaping) Amendment Act 2020 will restrict the e-liquid flavours available at generic retail outlets, such as convenience stores. This measure responded to sustained concerns about the rising prevalence of electronic nicotine delivery systems (ENDS) use among young people, many of whom find e-liquid flavours very appealing. At the same time, some argue that allowing all retail outlets to sell diverse flavours could foster switching from smoking to ENDS use and accelerate progress towards the Smokefree 2025 goal. In this blog, we discuss flavour restrictions and their potential impact on people who smoke and those who neither smoke nor use vaping products. 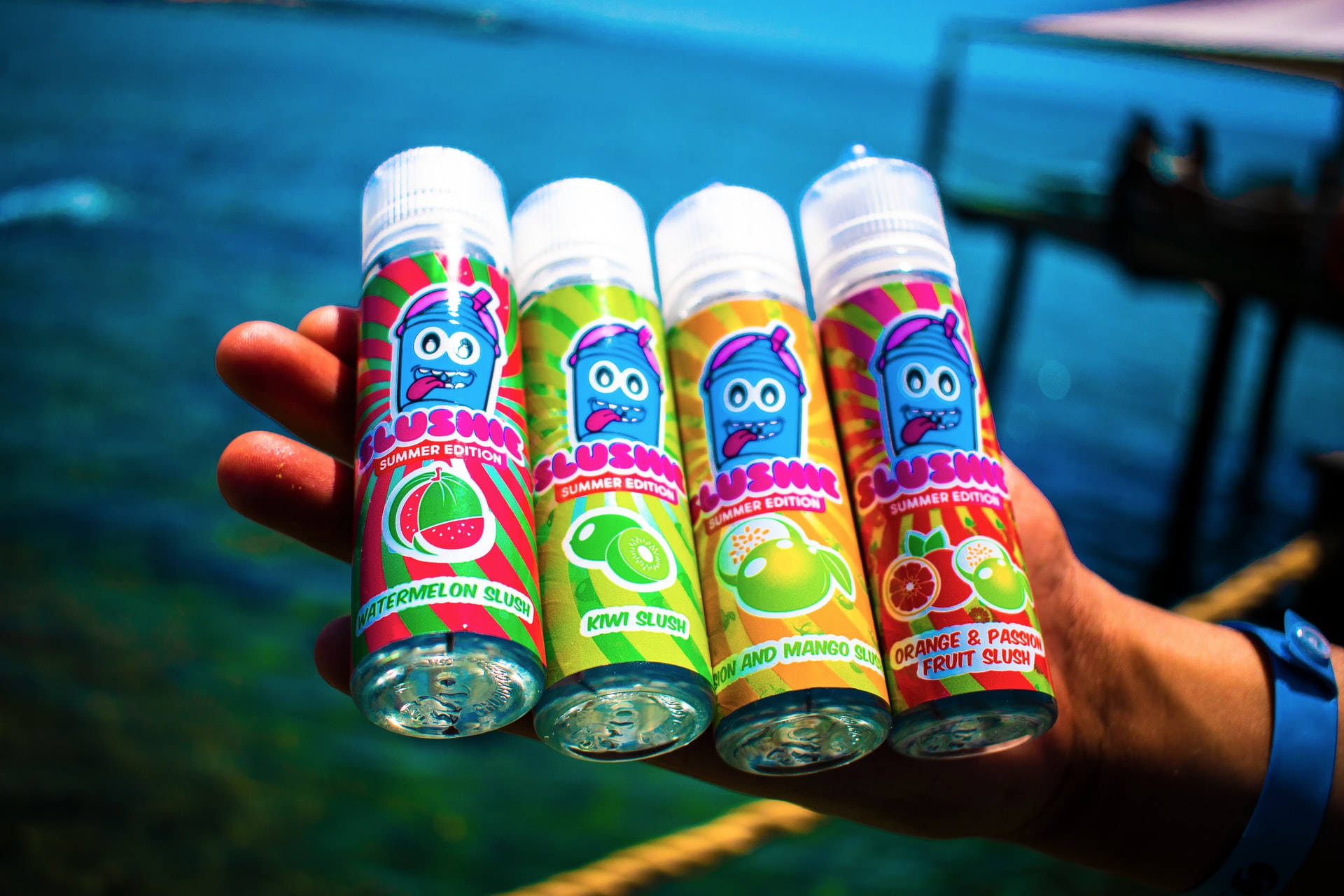 Photo by E-Liquids UK on Unsplash

In May 2018, the District Court ruled that the HEETS tobacco sticks used in Philip Morris International’s IQOS device did not breach s29 of the Smoke-free Environments Act, which prohibits the promotion and advertising of tobacco products used for chewing or other oral use. This ruling resulted in widespread marketing of electronic nicotine delivery systems (ENDS or vaping products), which quickly became pervasive.

Rather than target people who have smoked for many years and been unable to quit using other methods, industry promotions in New Zealand targeted young people, the vast majority of whom do not smoke.1 Using social media influencers and sponsorship of youth events, and by employing the same appeals once used to foster smoking uptake among young people, ENDS marketing quickly positioned these products primarily as lifestyle accessories.2 As well as intensive marketing across multiple media platforms, which has continued post-regulation,3 the number of ENDS retailers and online sites (with minimal and questionable age verification processes; see Figure 1) grew.4

Many ENDS devices, such as pod mods, combine aesthetic appeal with an easy to conceal design that attracted many young people.5 6 E-liquid flavours have expanded rapidly into new taste categories, such as dessert and confectionary, marketed using names such as “gummy bear” and “froot loops” that appeal strongly to youth who see themselves, rather than adults, as the targets of advertising for these flavours.7

Aggressive youth-oriented marketing has occurred alongside rising youth ENDS use. In 2019, the President of the Auckland Secondary School Principals’ Association commented: “At some schools we are starting to see over 30 per cent of students have tried it. The percentages of people who are using it regularly are pushing up towards five, six-plus per cent and the interesting thing about that statistic, that might seem low, but that’s in schools where smoking has hit basically zero per cent.”8

NZ youth studies have corroborated principals’ concerns and show rising ENDS use; data from the 2019 ASH Y10 survey of 14-15 year olds revealed that the proportion of respondents who reported ever trying an ENDS rose from around 20% in 2014 to nearly 40% in 2019.9 While daily ENDS use in 2019 was 3.1%, regular use (daily or weekly use) among the ASH survey respondents had risen to over 12%. The Youth19 survey covers a wider age range (13 to 18 year olds) of young people from Auckland, Waikato and Northland. It found similar proportions of ever use (38%), and reported that 10% used ENDS monthly or more often, while 6% used ENDS weekly or more often. The Youth19 survey also reported that 65% of those who reported ever using ENDS, and 48% of those who reported using ENDS monthly or more frequently, had never smoked cigarettes.10 Overall, these findings indicate rising ENDS use among young people and, importantly, show around half of regular ENDS users are never smokers.10

In 2020, the NZ Government responded to these concerns by passing the Smokefree Environments and Regulated Products (Vaping) Amendment Act 2020; which differentiated between specialist vape retailers (SVR) and generic retailers. The former could continue selling a diverse flavour range but the latter would be restricted to selling tobacco, menthol and mint flavours from August 2021. While some working with young people have welcomed this regulation as an initial step in protecting young people, others are concerned flavour restrictions will see people who had switched from smoking to ENDS return to smoking. How valid are these concerns?

Several studies have reported on the importance of flavours and flavour preferences among young people, particularly their preference for sweet flavour genres, such as fruit, confectionary and desserts.11-16 Surveys examining young people’s reasons for trying or using ENDS report flavours are a key reason for experimentation and sustained use,16-18 and more intensive use.17 19 Recent reviews examining preferences for ENDS found flavours were a key factor adolesents consider when trialling an e-cigarette.20 21 In 2016, the US Surgeon General’s report into E-Cigarette Use Among Youth and Young Adults concluded: “The most commonly cited reasons for using e-cigarettes among both youth and young adults are curiosity, flavoring/taste, and low perceived harm compared to other tobacco products. The use of e-cigarettes as an aid to quit conventional cigarettes is not reported as a primary reason for use among youth and young adults.”22 Evidence that flavours play an important role in adolescent ENDS use has led several researchers to recommend policy measures limiting e-liquid flavour ranges and thus deterring youth initiation.15 16 23

Arguments against flavour restrictions include suggestions these policies could be associated with increases in youth smoking. This argument assumes that, while ENDS are available in attractive flavours, they will displace smoking; according to this reasoning, restricting flavours could see young people who would have used ENDS, had more diverse flavours been available, instead turn to smoking.

Within Aotearoa, claims that ENDS have displaced smoking are not supported by data from the ASH Y10 survey, which show declines in smoking prevalence have plateaued (and may even be increasing) since ENDS became available. However, a study comparing the impact of an e-cigarette flavour ban in San Francisco on smoking prevalence relative to other areas where flavours were not restricted, found flavour restrictions were associated with increased odds of recent smoking.24 These findings suggest close monitoring will be required to assess the impact of flavour restrictions. More importantly, however, they indicate that policies restricting the accessibility and appeal of smoked tobacco must continue as a core strategy to reduce youth uptake, irrespective of flavour regulation.

The role ENDS products play in reducing smoking prevalence remains debated. Some groups argue that ENDS could help realise the Smokefree 2025 goal and believe restricting the flavours available from generic retailers will impede transition from smoking to ENDS.25 Yet although ENDS have provided an alternative for some people who smoke, NZ data do not show a rapid decline in smoking prevalence following ENDS’ introduction in around 2014 and wider availability and marketing since 2018. Evidence smoking prevalence did not decline markedly during a period when e-liquid flavours were unregulated, questions whether the partial flavour restrictions that have been implemented in NZ will have a marked impact on ENDS users. Further, the flavour restrictions apply only to generic retailers, full flavour ranges will still be available from specialist vape retailers. As of 29 July 2021, the Ministry of Health’s list of specialist vape stores included more than 400 retail outlets and more than 100 websites, which suggests ready access to diverse flavours will remain.

Flavours’ role in supporting transition from smoking to ENDS use is not yet clear. Surveys of people who smoke and have used ENDS report mixed findings with respect to flavour’s importance; for example, the attribute “ECs come in flavours I like” was one of the least important reasons given for trying ENDS (cited by 30% of respondents) in one US study,26 though a Canadian study found “flexibility”, a category that included flavour attraction, was associated with a higher likelihood of switching.27

A survey of people who smoke or who had recently quit and were using ENDS found the most common flavour categories used were fruit (29.4%) and tobacco (28.7%); around 14% reported using a mint or menthol flavour or a confectionary flavour.28 Respondents found confectionary and fruit flavours more satisfying and enjoyable than tobacco flavours; however, flavour category was not associated with the likelihood of making a quit attempt.28

Flavours’ importance also varies by age. Older adults who smoke viewed ENDS flavours as less important than did younger adults, and the former placed more emphasis on health as a reason for switching from smoking than their younger counterparts.18

Longitudinal qualitative research exploring how switching from smoking to ENDS use occurs has found many people who smoke and adopt ENDS develop a strong antipathy to the taste of smoked tobacco.[1] These findings do not support the argument that restricting the flavours able to be sold in generic retail outlets, such as convenience stores and service stations, will lead large numbers of people who switched from smoking to ENDS to return to smoking. A recent choice study also found that, banning non-tobacco or menthol flavours (e.g., fruit, coffee and confectionary) would no longer be available, users of these flavours “would primarily prompt previous users of non-TM flavours to switch to menthol” (p4) rather than revert to smoking.29 They concluded “people are unlikely to switch to another product/ device because of the restriction of flavour or nicotine levels” (p6).29

Reducing young people’s use of ENDS products is an important public health priority and limiting flavours available from generic retail outlets appears to be a proportionate, evidence-based, and overdue measure. Allowing specialist R18 stores and websites to sell varied e-liquid flavours will provide people who smoke, have switched to ENDS, and who have developed strong flavour preferences, access to their preferred e-liquids. Evidence that a large number of retailers have registered their outlets and websites as specialist vape retailers suggests diverse flavours will remain available to adults who smoke and want to switch to ENDS.

Implementing more robust age-verification processes for websites will help ensure these do not become a youth supply route; careful monitoring of youth vaping and smoking prevalence is required to assess the effectiveness of these processes and whether more stringent measures may be required to protect young people from the harms associated with vaping, including becoming addicted to nicotine. Furthermore, some flavours still available via generic retailers, particularly mint, appeal to young people; further regulation may be required to ensure only specialist vape stores sell flavours with high appeal to young people.23

On-going monitoring and evaluation of how these changes to e-liquid flavour availability affect people who smoke and who are switching to ENDS, as well as non-smokers who have previously found it easy to access an enticing flavour range, will be critical. However, until there is evidence this measure has resulted in substantial numbers of switchers returning to smoking, the legislation’s emphasis on protecting young people is highly appropriate and well overdue.