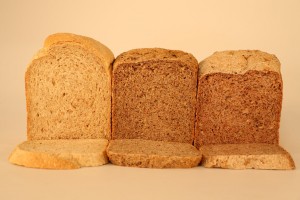 This blog reports on a study we just published on optimising the design of bread for heart health. Using linear programming we found it possible to design breads that are nutritionally superior to commercially available breads in 15 countries from a heart health perspective, as well as being lower cost. Such bread designs could be promoted by health agencies and utilised in conjunction with a government-funded bread voucher system for those at high risk of cardiovascular disease.

Why study bread as a health issue?

The global burden of non-communicable diseases (NCDs) accounts for around two of every three deaths worldwide in 2010 (1). Furthermore, a global estimate for 2013 indicated the high burdens of years lived with disability from: diabetes (29.5 million), cardiovascular disease (21.2 million) and cancer (6.7 million) (2). Dietary risk factors are particularly important for these NCDs (2), and some of these include intakes high in sodium (salt), low in dietary fibre and low in beneficial types of fatty acids (e.g., polyunsaturated fats). One food which has all three of these nutrients is bread and, in NZ, bread is the major single source of dietary sodium.

Various European governments aim to reduce sodium intakes by regulating the maximal level of sodium in bread (3, 4). This action is supported by numerous modelling studies that suggest both health and economic advantages of reducing sodium in bread (eg, (5-10) – including our own work in NZ (11)). Furthermore, there have been successful studies and interventions to replace sodium chloride in bread with potassium salts (12-14). So to further progress thinking around bread design issues, we aimed to design optimised versions of low-cost heart-healthy breads (HHBs).

In our study, just published in the journal “BMC Nutrition” (15) (free online access), we used linear programming to optimise bread designs from a nutritional and low-cost perspective. This programming optimises the various key nutrients for CVD prevention, given pre-set target prices for all the ingredients in the loaves: in this case at NZ$1.50 and $3.00 (ie, which we call the “HHB$1.5” and “HHB$3” loaves).

We also made comparisons with white breads available in 15 OECD countries – including NZ, and with nut/seed containing breads (only available for 6 of these OECD countries). Key design features were replacing some of the normal salt in the bread with a high potassium salt, increasing use of wholemeal flour, and for the higher cost version, adding seeds such as linseed (flaxseed) and walnut.

We found that the HHB$1.5 loaf was superior to the commercial white loaves in several of the heart health categories (e.g., lower in sodium and higher in potassium). The HHB$3 loaf that was high in linseed, was nutritionally superior to the commercial loaves with seeds/nuts in six out of the eight heart health categories (eg, in terms of lower sodium, higher potassium, higher dietary fibre, and best polyunsaturated fatty acid (PUFA)/saturated fatty acid (SFA) ratio). The HHB$3 loaf was also superior to the HHB$1.5 loaf in seven of the eight heart health categories. Some of the differences were large, such as the alpha-linolenic acid (ALA) level in the HHB$3 loaf being 26 times the median for the white loaves and 2.2 times the median for the commercial high seed/nut loaves.

In terms of value-per-weight, we found that a commercial white loaf from the UK was slightly lower cost than the HHB$1.50 loaf (at NZ$0.10 vs NZ$0.15 per 100 g loaf*). The HHB$1.5 loaf also performed relatively well in terms of price per kJ of food energy (fourth equal). But compared to the other seed/nut loaves, the HHB$3 loaf was by far the best value for money at NZ$0.25 per 100 g, vs a mean of NZ$1.25 per 100 g across the international comparators.

From the documented cost-structure of the Canadian baking industry, we also estimated potential costs of mass production of the HHB designs. When assuming zero profit (eg, as per a non-profit institution such as a hospital kitchen with its own bakery) we estimated that the cost would be reduced to: $1.46 for the HHB$1.5 loaf, and to $2.57 for the HHB$3 loaf.

Where commercial manufacturers/retailers produced and sold HHB loaves (eg, as per possible contracts for a government voucher system for provision of HHB to people with CVD) a profit margin would be relevant. For example, a 25% profit margin shared by producers and retailers would push up the price to: $1.82 for the HHB$1.5 loaf and $3.22 for the HHB$3 loaf. Based on these estimates and a 25% profit mark-up, we estimated that the HHB$1.5 loaf at $0.18 per 100 g would remain well under half that of the median for the commercial white loaves from the 15 OECD countries.

At two loaves a week per adult (eg, for a patient at high risk of CVD) this would be $403 per year in voucher costs for a 100% subsidised loaf supply (albeit not including the voucher delivery and other administration costs). Whether this is justified from a health sector funder perspective would depend on many issues such as the priority given to protecting public health and the cost-effectiveness of such a programme (this should ideally be modelled before any implementation so it can be compared with other possible interventions).

Even healthier breads are possible

Even healthier breads would be possible at prices above the HHB$3 design (eg, with these containing even more seeds such as flaxseed and walnut – see Figure 1 above). Indeed, some countries currently have seed/nut breads sold commercially at up to 17% seeds by weight: as per one from Finland which we included in our study’s comparison group. Even further reduction of sodium levels may also be possible as might higher proportions of wholemeal flour. Actually the full “design-universe” of HHBs is very large and might include other relatively healthy additional ingredients such as: soy, sourdough, dried fruit, high phenolic olive oil, and extra fibre sources (eg, wheat bran and rye flour). A special version of a HHB that was particularly suitable for women of child-bearing age could also include added folic acid for preventing neural tube defects in infants (especially relevant to NZ which does not require flour to be supplemented routinely).

An institution such as a public hospital with its own bakery could “market test” the acceptability of various HHBs on staff who use the hospital cafeteria. The latter could be done in conjunction with non-governmental organisations – such as the Heart Foundation in NZ. If there were concerns about public acceptability of new bread design, then a more incremental approach could involve slowly phasing down the levels of white flour and sodium while phasing up the levels of linseed/flaxseed and salt substitute (ie, potassium) in the HHBs promoted for mass consumption.

Epidemiological and economic modelling could also attempt to quantify the effectiveness (in quality-adjusted life-years gained) and cost-effectiveness of a government-run voucher system for a HHB version for those at increased CVD risk. More widespread use of such breads eg, potentially recommended by health professionals for all NZ adults over 50 years could also be studied. Some people might prefer eating HHBs to taking preventive medications such as low-dose aspirin (although doing both might be optimal for reducing CVD and cancer risk (16)). In a future blog we may expand on some of these issues – and also give some personal reflections on what types of HHBs are the most tasty.

This proof-of-concept study suggests it is possible to design breads that are nutritionally far superior from a heart health perspective to commercially available breads, as well as being lower cost. Such HHB designs could be utilised in conjunction with a government-funded voucher system for those at high risk of CVD. This could be one component of more comprehensive CVD prevention programmes which ideally could cover multiple nutritional and physical activity interventions such as taxing junk food (as per Mexico), down-regulating maximum salt levels in processed foods, and facilitating cycling and walking as commuter options.

* Note: Our published article used $US values using OECD exchange rates and purchasing power parity adjustments – but in this blog we just present NZ$ values (using a US$1:NZ$1.47 conversion rate as per April 2016).