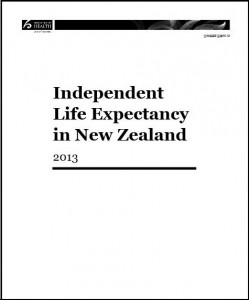 In this blog we review the latest update by the Ministry of Health on how much of NZers life expectancy can be expected to be in good health. The good news? We are both living longer, and living longer in good health. The bad news? According to this report, the percentage of our lives with some dependency due to poor health is increasing. And there are marked inequalities in healthy life expectancy. This sort of analysis, as hard as it is to get right, is important – as a society we do not want to just live longer, but live longer in good health. However, we have concerns about the accuracy of this Report, and critique it in this blog.

The last two centuries have seen phenomenal increases in life expectancy at birth:

Living longer is great – so long as it is socially and environmentally sustainable. In order to enjoy the extra years, and to be able to work longer to support an aging population, it is desirable and important to increase time lived in good health.

In demography circles, this is a hot topic, and is sometimes framed in terms of the compression or expansion of morbidity. You need to be able to think absolutely and relatively. For example, imagine 50 years ago life expectancy was 60, with 54 years in good health. And by 2015 it was 80, with 74 years in good health. Under this scenario, both overall and healthy life expectancy has increased, the non-healthy expectation stays the same in absolute terms (6 years) but falls as a percentage of total life expectancy (from 10% to 7.5%).

So what is happening in NZ? Below is a figure from the Ministry of Health’s just published Independent Life Expectancy in New Zealand report. The Ministry used Post-Censal Disability Surveys to partition total life expectancy into:

The Disability Survey is based on ‘objective’ questions (e.g. concerning assistance needed in activities of daily living). Other studies have used ‘subjective’ measures such as global self-reported health, and may be more affected by trends over time in expectations. However, despite the use of ‘objective’ measures, the 2006 Post-Censal Disability Survey apparently underestimated disability, and it is recommended these results should be put aside when making comparisons over time (personal communication, Martin Tobias, Ministry of Health). Hence we place a semitransparent box over this time point in our figure.

According to the Ministry report, independent life expectancy has increased modestly from 1996 to 2013 from 63.8 to 65.2 years for males, and 66.4 to 66.5 years for females. That was the (slightly) good news. The bad news is that the number of years living in disability requiring daily assistance, and non-daily assistance, have both increased in absolute terms, and as a percentage of total life expectancy. That is, morbidity appears to have expanded in both absolute and relative terms. 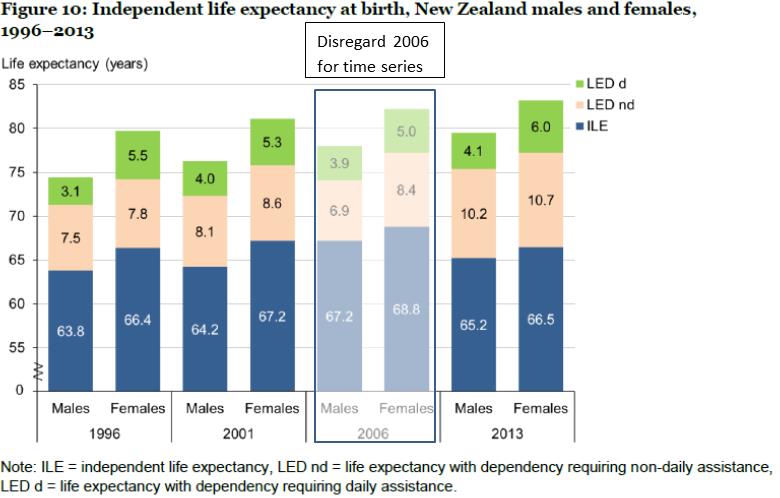 The estimates become more statistically unstable for Māori males and females, but here too morbidity has expanded – possibly more so than for non-Māori, and Māori consistently experience more years with dependency than non-Māori. Put another way, not only is Māori life expectancy less than non-Māori at all points in time, but the independent life expectancy gap is even larger. The figure for Māori males is shown below. 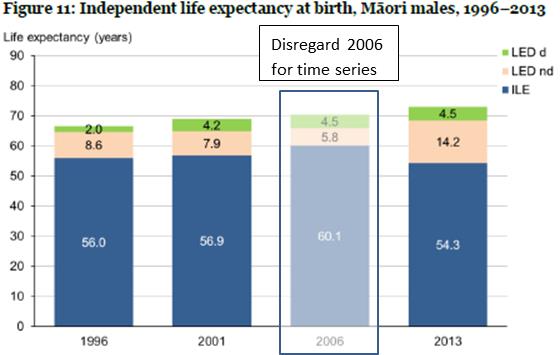 The Ministry has also undertaken an alternative analysis, not using the Disability Survey data but using burden of disease methods and disability weights (Compression of morbidity: concept, measurement and current status, Internal Ministry of Health Note, Martin Tobias, September 2014). This method, too, found that whilst healthy life expectancy increased from 1990 to 2010, as a percentage of total life expectancy it reduced by about half a percentage point (i.e. there was modest expansion of morbidity). However this method depends on an assumption that the amount of morbidity captured by hospitalisations and other events used in the burden of disease algorithms is stable over time – which is questionable when it comes to interpreting such small marginal changes.

If we assume these findings, despite their imperfections, are ‘about right’, why has morbidity expanded? Maybe health services are keeping people alive longer with some morbidity. Maybe we are seeing the arrival of obesity as a major cause of mass morbidity. As shown by the recent GBD updates, mental health and musculoskeletal disorders make up an increasing fraction of disability in most countries; prevention and mitigation of these conditions needs more attention.

The above statistics are as good as we will be able to create in NZ – historically at least. And we applaud the efforts expended by the Ministry of Health and Statistics NZ in producing these statistics. But we actually have major concerns about their reliability. Why?

First, we do not believe the trends are consistent with what we see internationally. For example, an authoritative review by leading demographers in the Lancet outlined how hard it is to get these time series right (we agree!), but that generally speaking across the world healthy life expectancy is increasing as fast as total life expectancy. Also, in Australia ‘life expectancy without disability’ is increasing nicely (figure below) – although it is not all rosy with possible modest increases in absolute years with disability. 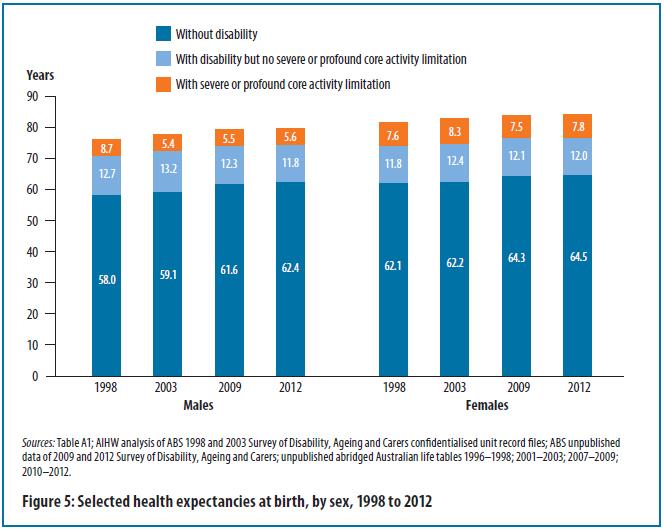 Why might the NZ report be missing the mark? Three reasons (with our comments – informed by very helpful correspondence with our colleagues at the Ministry of Health and Statistics NZ involved in the latest Report):

So there are our concerns. Unfortunately, we are not able to confidently say what the trends actually are – only express our concerns that the best we can do may not be accurate. But this issue – compression or expansion of morbidity – is important. Research that clarifies the best list of objective measures for measuring trends in disability over time is needed, and a closer look at the NZ vs Australia differences.

This entry was posted in Uncategorized and tagged inequalities, life expectancy by Kate Sloane. Bookmark the permalink.