A study in the NZ Medical Journal shows how public spending on health varies markedly by age and proximity to death (Blakely et al 2014, health system costs). It raises interesting questions about the best use of taxpayer funds for preventing and treating ill health. In this blog we detail the main findings of this study and reflect some of the possible implications.Our study used linked administrative health data, with costs attached – so called HealthTracker, an amazing resource for New Zealand analysts, planners and researchers. We looked at how health system expenditure varied by age and whether people were within six or 12 months of death.  One analysis simulated health expenditure over a Kiwi’s lifespan, assuming 2007-09 costs by age applied.  The results are in Figure 1(click on it for higher quality image). 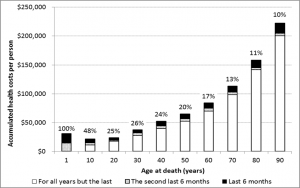 Figure 1. Estimated cumulative health system costs (in 2011 NZ$) for deaths at different ages (assuming a steady state for costs throughout the life course for the year 2011 values with no discounting). Labels above each bar show the percent in the last year of life

We also looked at costs-per-year, by age and proximity to death – the results for females are in Figure 2. As one example, the amount of public health 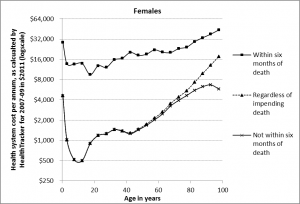 Figure 2. Health system costs per person-year for New Zealand female citizens during 2007–09, disregarding proximity to death, and separately for within and not within 6 months of death (graph for males is very similar – see the published article)

spending in the last six months of life was up to $30,000 for infants and the elderly.

These results are important inputs into cost-effectiveness analyses.  But they also cause one to ponder on how much we currently, and in the future, publicly fund health services.

How are we doing with end of life spending?

It is commonly stated that something like 25% of health spending is in the last six months of life. However, what we have found is that over the lifespan of a Kiwi citizen it was only in excess of 25% for deaths in the first few decades of life.  The vast majority of deaths occur at older ages.

For someone dying at age 80, of all the public spending on them over their life ‘only’ 11% is expected to be in the last year of life.

Given that there is concern that spending in the last year of life may not be the best use of resources, it looks like New Zealand is not doing too badly in this respect.

Nevertheless, there are probably savings to be made at the end of life through the likes of wider use of advanced care plans.  Such personally-designed plans may increase quality of life near death (eg, by avoiding interventions such as surgery that might only gain a few weeks or months of life).

What about future public health expenditure in NZ?

Our country has a mostly publicly funded health system, including about $16 billion through Vote Health and Vote ACC.  About two thirds of this funding can be attributed to individual citizen’s health system events such as hospitalisation, lab tests and drugs. These events provided the data used in our study published today.

Treasury has estimated that Public or Government-financed health spending as a percentage of GDP in NZ might increase from 6.9% in 2011 to 11.1% in 2060.  However, Treasury models do not allow for shifting out to older ages of ‘near-death’ costs due to people living longer.  That is, if we use just average citizen costs by year of age today applied to the expected population age structure in 10, 20 or 50 years’ time, we will over-estimate health spending as people are dying at older ages – meaning costs at younger ages are a bit less.  Some have called this the ‘red herring’ argument.

We tested how important this red herring problem is.  To our surprise, we found that allowing for shifting of near-death costs only reduces projected future health spending by a few per cent.  That is, under best-guess future trends in demography, disease and disability rates, and societal expectations, we are looking at a near doubling in publicly-funded health services in the next 50 years – a major issue for governments and Kiwi citizens.  And we therefore give a thumbs up to the Treasury projections.

So who should we spend health funding on, and when?

Deciding and controlling total spending on publicly-funded health services can be hard for policymakers. Also deciding on how this funding should be distributed between young and old, people in good health versus those near death and between prevention and treatment also requires some careful thinking. .

The allocation of public funds to health services also needs constant public debate, balancing the maximisation of health gains for each dollar spent against other values such as fairness, or the right to dignified death.

Nevertheless, spending more on prevention can also often be cost-saving in the long run – and there seems plenty of scope for more prevention.

For example, reducing energy and sugar intake reduces diabetes rates, which reduces future health system costs – even allowing for people living longer and needing other services further into the future.  On the other hand, demand on treatment services is virtually never-ending, meaning that savings in one area – for example fewer diabetes clinics – are usually quickly deployed elsewhere – for example more services for Alzheimer’s and dementia.

If the goals of Kiwis includes increased quantity and quality of life, keeping health spending in check, and building a healthy and productive workforce aged up to 70 years of age or more to support the growing number of people aged over 70, we suspect that prevention policies should probably be a key focus. Major domains include obesity prevention, reducing harm from alcohol, and achieving the government’s Smokefree Nation goal by 2025 – topics we have covered previously at the Public Health Expert blog.

This entry was posted in Uncategorized and tagged cost effectiveness, health system cost, prioritization by TONY BLAKELY. Bookmark the permalink.