Annual consumption of cigarettes now exceeds five trillion, with around four trillion butts littered every year. These cigarette butts cause major environmental damage and impose significant clean-up costs on local authorities. Although tobacco companies have framed smokers as responsible for butt litter, recent debate has focused on the tobacco industry’s role in creating tobacco product waste (TPW) and its responsibility for managing this problem.  We recently examined public perceptions of TPW in New Zealand and allocation of responsibility for creating and managing it.

Cigarette filters were first introduced in the 1950s and 60s, in response to growing evidence that smoking caused lung cancer and other serious (and often fatal) illnesses. Advertising at the time declared filtered cigarettes were “Better for your health” and sought to reassure smokers that switching to a filtered option was an alternative to quitting,1 even though filters do not reduce the risk of serious diseases.2 US evidence shows the market share of filtered cigarette brands grew rapidly from 1955 onwards, while the share of non-filtered brands declined; by the mid-1990s, non-filtered brands represented a negligible share of the overall cigarette market.3 Although numerous studies have documented smokers’ mistaken belief that filters reduced the risk they face from smoking, nearly all cigarettes smoked now contain filters.4

Not only do cigarette filters mislead smokers about the risks they face, they are also a pervasive litter item and environmental hazard;5  recent news reports suggest that, each year, more than six million cigarette butts are discarded in New Zealand. Because cigarette filters comprise non-biodegradable cellulose acetate, they accumulate where they are littered, leaching toxic chemicals into the soil before being often swept into waste water systems and out to sea, where they contribute to accumulating plastic mountains. 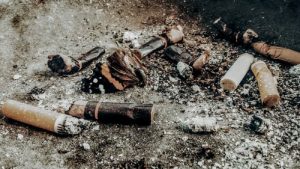 Some tobacco companies have responded to the butt litter problem by contributing to campaigns, such as Keep New Zealand Beautiful.  These programmes call for more butt litter receptacles, a solution that risks normalising smoking and, according to observational studies, has limited effect on butt disposal behaviours.6 Fundamentally, these ’corporate social responsibility’ initiatives position butt disposal as a smokers’ problem, reinforce negative stereotypes of smokers, and relocating responsibility away from tobacco companies.

Recent debate has refocussed attention on tobacco companies, and drawn on theories of product stewardship and extended producer responsibility, to argue that cigarette manufacturers should be accountable for the harms their products cause.7-9 These arguments recognise that tobacco companies continue to manufacture a product that damages smokers’ health and the environment, despite unambiguous evidence of these harms.

Although a continuum of responses to tobacco product waste (TPW) exists, we know little about how the general public perceives this problem or what they consider appropriate responses.  Our recently-published study examines these questions. Using an online survey of 800 New Zealand smokers (n=386) and non-smokers (n=411), we estimated awareness of TPW, attribution of responsibility for TPW, and support for interventions to reduce TPW.10

Table 1: Allocation of Responsibility for Addressing TPW Pre and Post Information on Biodegradability

We examined perceived effectiveness of specific measures to address TPW and classified these as either focussing more on personal responsibility or on producer responsibility.  The former measures included including fines for litterers, extended smokefree outdoor spaces, advertising campaigns to promote understanding of environmental harm, adding $2 to cigarette packs refundable on return of the pack and butts, and developing on-pack labels to inform smokers of the harms caused by butt litter. Of these, the measures seen as most likely to be effective were fines (74%) and increased smokefree spaces (70%), though smokers saw advertising campaigns as the most effective approach (72%).

Measures focussing more on producers included laws requiring biodegradable filters, prohibiting the sale of filters, requiring tobacco companies to pay for clean-up costs or assume management of TPW management, and a price increase of $2 per pack to meet butt disposal and cleaning costs. Of these, smokers and non-smokers alike regarded mandating biodegradable filters as most effective (81%), the only measure to gain greater support than the individually focused responses. Smokers were less likely than non-smokers to support laws disallowing sale of filters (37% cf. 57%) or price increases to allocate funding to TPW clean-up operations (37% cf. 54%).

We undertook more detailed analyses to examine determinants of support for the different measures examined. These revealed that Pacific peoples were more likely than Māori and European/Other ethnicities to support advertising campaigns and on-pack labelling; Māori and Pacific respondents were more likely than European/Other respondents to support laws requiring tobacco companies to be responsible for collecting and disposing of TPW.

Tobacco product waste should be a serious concern in a country like New Zealand, which has developed a “100% pure” tourism identity. Tobacco companies have successfully framed people who smoke as both the cause of, and solution to, TPW, a stance that overlooks their culpability as product manufacturers. Our study reveals more complex perspectives and suggests it would be timely to debate responsibility for this ubiquitous hazard that threatens health and our international positioning.

Increasing awareness of the toxicity and non-biodegradability of filters, and their role in creating TPW, could generate public and political support for requiring tobacco companies to manage this serious environmental problem. New Zealand could adopt a similar stance to the European Parliament, which recently announced plans to require tobacco companies to manage butt litter. Re-balancing perspectives on responsibility for TPW by holding tobacco companies as well as smokers accountable could also reduce unkind stereotypes of smokers, which do little to increase the self-efficacy required to make a successful quit attempt.11,12 As well as specific measures to re-apportion responsibility for TPW, policy measures should continue to foster smoking cessation and decrease uptake, because reducing smoking prevalence presents the best long-term solution to addressing TPW.13