Pricing is one of the most potent influences on consumers’ behaviour. Governments around the world have used this knowledge to implement tobacco excise taxes, which raise the price of tobacco thus reducing tobacco consumption and smoking prevalence. However, tobacco companies have undermined the intended impact of excise taxes by creating new lower-priced brands or brand variants, and by manipulating excise tax increases in their brand pricing. In this blog, we discuss the findings of our just published paper on pricing and changes in the NZ tobacco market during a period of sustained excise tax increases, and explain how minimum pricing could help prevent tobacco companies from undermining measures designed to encourage smoking cessation and discourage smoking uptake. 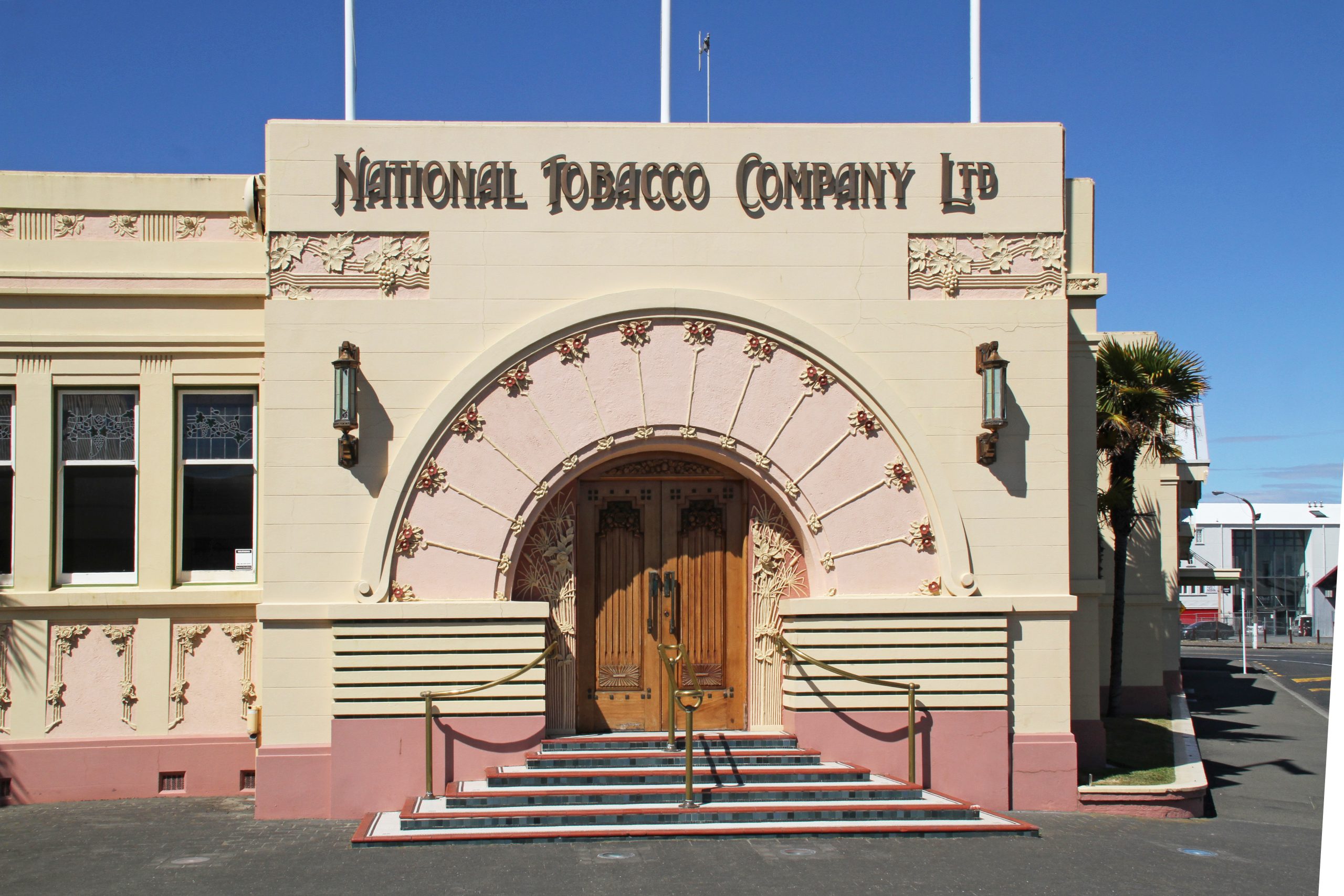 Preferring robust empirical evidence to tobacco industry rhetoric, several governments have introduced excise taxes on tobacco products as part of broader strategies to reduce smoking. However, tobacco companies have undermined these measures by differentially ‘over-shifting’ or ‘under-shifting’ the tax increases, (i.e., increasing prices beyond the tax increase, or not applying the tax fully).6 7 These approaches reduce the impact of excise taxes and thus reduce the motivation of price sensitive people to quit smoking. As well as manipulating how excise taxes are applied, tobacco companies have launched more budget brands and variants; these options appeal to price sensitive people and enable them to trade down from their favoured brand rather than quit when tobacco prices increase.

The NZ setting offers an interesting context to review market changes following excise tax increases because, from 2010 to 2020, the excise tax on tobacco products increased by ten percent each year (with an added inflation adjustment). These policies made NZ tobacco prices among the highest in the world. NZ requires tobacco companies to supply data on the number of cigarette sticks released each year and the retail price of each of their brands; using these data,8 we examined market place changes during this period of sustained tax increases.9

Markets comprise price partitions that have similar attributes. We identified four price partitions in the NZ factory-made cigarette market: super value; budget; everyday and premium.9 Between 2010 and 2020, the market share of the super value partition grew from 3.2% to 24.4%, while the premium partition declined from 27.3% to 10.7%. These changes occurred because tobacco companies introduced new budget brands while withdrawing premium brands; by 2020 the number of brands in the super value partition had nearly doubled, while the number of premium brands had nearly halved. Overall, as excise tax increased, people who smoke traded down to less expensive brands. Figure 1 below outlines how these strategies affected the market share of each brand price partition over time. 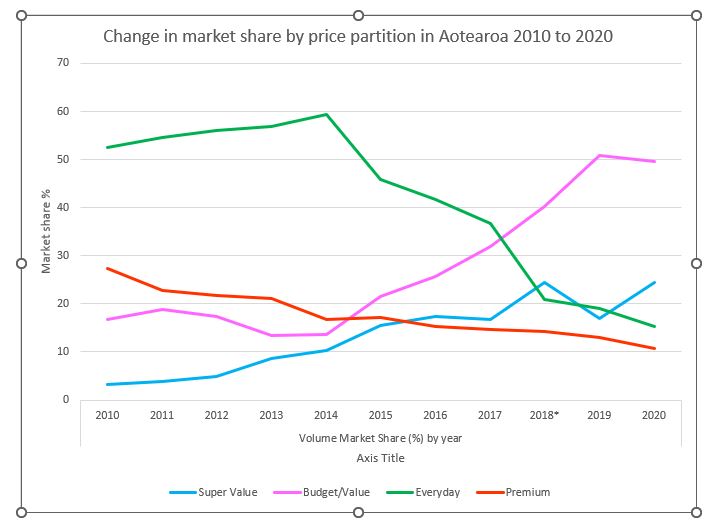 In further analyses, we compared the cigarette stick prices we would have expected to see, if the excise tax had been appropriately passed on by tobacco companies to all retail prices, as intended by government policy. We saw over-shifting in all price partitions in most years (that is, increases in the price of brands by more than the excise tax increase). However, over-shifting was greatest among premium brands, where it was nearly twice that among lower price brands.

What implications do our findings have for smokefree policy?

First, they illustrate how tobacco companies’ behaviour changed the tobacco market structure over the period examined. In particular, the industry’s proliferation of budget and super value brands, which included new variants within established brand families (e.g., Rothmans Royals) ensured people who smoked could switch to alternative, cheaper brands. The introduction of new lower-priced variants such as “Royals” and “Crafted” within existing brands created prestigious connotations that arguably offset the potentially negative perception of trading down to a cheaper option. Freezing the cigarette market would prevent the deliberate brand proliferation we observed and would help ensure the aim of excise tax increases could not be easily circumvented by the introduction of new, less expensive brands or brand variants.

Second, we found tobacco companies had generally increased prices beyond the increase in excise tax (including the annual inflation adjustment), a strategy that will have increased their overall profitability. Prices of everyday and premium brands, the two more expensive market partitions, had increased more than the prices of budget and super-value brands. The differential over-shifting among more expensive brands expanded the price gap between lower and higher priced brands, and meant the super value and budget partitions became relatively cheaper compared to the everyday and premium partitions. Thus, at the same time as increasing their overall profits, tobacco companies ensured lower priced brands and variants remained available as alternatives to quitting. Although changes in net real stick prices were often small, when aggregated over hundreds of thousands of sticks, these changes had considerable revenue, and hence profit implications.

Policy makers could address this latter finding by introducing a minimum retail price, which could eventually eliminate the super value and budget price partitions.10 Or, to avoid this strategy enhancing the overall profitability of tobacco companies, policy makers could set maximum wholesale prices and impose higher taxes, thus ensuring retail prices did not drop and increased profits go instead to the government.11

Any pricing strategy that increases the costs to people who smoke needs to manage the risk that they may displace other purchases as a way of accommodating rising tobacco costs.12 13 Evidence that the vast majority of people who smoke want to be smokefree behoves policy makers to strengthen policies that will cue quitting (e.g., denicotinised tobacco and fewer retail outlets) and increase the community-based cessation support available. The widespread availability of vaping products in NZ provides a relatively low-cost alternative to smoking and offers people who cannot stop a reduced-harm option, though further work is required to prevent access to vaping products by non-smoking youth.

Setting a minimum tobacco retail price or setting maximum wholesale prices and imposing higher taxes, would greatly limit tobacco companies’ ability to undermine pricing measures, which have played an important role in reducing smoking in NZ. Health Committee members considering submissions on the Smokefree Environments and Regulated Products (Smoked Tobacco) Amendment Bill have an important opportunity to ensure the Bill includes pricing measures that reduce tobacco companies’ ability to undermine the intent and impact of government policy. Including such strategies in NZ’s legislation would support the core measures of denicotinising tobacco, reducing retail outlets, and introducing a tobacco-free generation.

* Authors: Philip Gendall, Janet Hoek, Richard Edwards and Nick Wilson are members of the Department of Public Health, University of Otago, Wellington. Robert Branston is a member of the School of Management at the University of Bath, UK.

This entry was posted in Uncategorized and tagged cigarette pricing, smokefree 2025, tobacco companies by cooju60p. Bookmark the permalink.