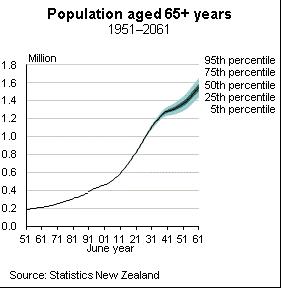 SNZ predictions of number of New Zealanders aged 65 plus

Have you sat in a meeting recently, or listened to the radio, where someone is invoking the aging population as a harbringer of doom and gloom due to the tsunami of older people with poor health? A tsunami that will overload health and social services, etc. Have you then asked yourself “Hang on a minute, if people are living longer are they not also healthier?”. Or even “Why on earth do government agencies and some academics keep talking about the number of people aged greater than 65 as a marker of some dependency on the state?”. Well, this Blog is for you. We use a paper just published in PLoS ONE that demonstrates how with falling mortality rates, population aging may actually slow due to a rapid increase in the age at which your remaining life expectancy is 15 years or less. And we draw on analyses from our own book, The Healthy Country? A History of Life and Death in New Zealand, to critique naïve assumptions about population aging. Which begs many questions, such as “Why is the age of entitlement for New Zealand superannuation still 65?” Read on.

Life expectancy at birth in New Zealand is rocketing upwards, recently gaining 2-3 years every decade (and see just released 2012-14 lifetables). But is this altogether a good thing? Many worry that we face a future that will be overwhelmed by old people. They ask: will we be weighed down by an aged population, threatened by a top-heavy age pyramid due to an ever-growing fraction that is elderly?

You might think that the faster mortality falls, the more quickly the population ages (assuming no changes in fertility and migration). But this isn’t necessarily the case, according to a recent paper in PLoS ONE.

At issue here is what defines “old age”.

When Dick Seddon introduced the Old Age Pension in 1898, he said you reached old age on your 65th birthday. And that is still the measure of eligibility for New Zealand Super, and is widely used as a definition of old age (1). Elsewhere, old age starts earlier. For instance, in its World Ageing Report, the United Nations treats 60 years as the beginning of old age (2).

Taking this approach, it is plain that the lower mortality rates fall, the greater the proportion who reach their 60th or 65th birthdays, and therefore the faster the population ages.

But is “years lived” an appropriate measure, when “years yet to live” are increasing so fast, and at every age? In New Zealand, life expectancy for a female once she turned 65 was 19 years in 1981; in 2011 a non-Māori female aged 65 can expect to live another 24 years.

In the PLOS paper Sanderson & Scherbov argue that instead of a fixed chronological age, being old should be defined by a dynamic, prospective measure, such as remaining life expectancy, one that takes account of changing circumstances. For instance, one might use the age at which one has less than 15 years life expectancy remaining, since that corresponds fairly well with the onset of significant age-related disabilities.

From this angle, it is apparent circumstances have changed greatly, and human prospects have improved to a remarkable extent. Using the “15 years yet to live” standard, French women would have been defined as old beginning at age 58.4 years in 1900, at age 64.8 in 1956 and at 74.6 in 2012.

Looking ahead, Sanderson & Scherbov ask: what proportion of the population will be “old”, using the conventional definition (65 years+) and a prospective measure (less than 15 years to live)? They apply these scenarios to the German population, rolling forward from 2013 to 2030 and 2050 and, and this is the innovative bit, they test the effect of varying the rate of mortality decline.

With no change in mortality rates, the population ages at a similar speed, whichever definition is applied. Assuming mortality declines in the future, the proportion over 65 increases, and the faster that mortality rates fall, the greater the increase in the aged segment of the population.

The picture is quite different when the prospective measure of “being old” is used. In this German dataset, the proportion with less than 15 years to live increases from 2013 to 2050, but is less, at any point in time, if mortality is falling than if it is static. And the faster mortality rates fall, the slower the increase in the proportion defined as “old”. 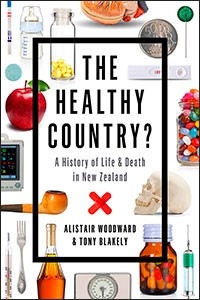 This is the answer to what seems a paradox. As life expectancy stretches out into the future, the threshold of old age also advances. Depending on the rate of change in life expectancy, and the existing age structure of the population, it is possible for mortality decline to co-exist with a very modest increase in the proportion defined as elderly. All else being equal, the faster the increase in life expectancy, the slower the rate of population ageing – using a more rational measure than a ‘static’ age of 65.

This is a fundamentally important insight. Continuing improvements in life expectancy will certainly add years to the lives of individuals. But service planners and others concerned about population ageing must pay attention not only to the number of future 65 year olds, but also the characteristics of this group. And steps to drive mortality lower are not necessarily at odds with efforts to slow population ageing.

One very important characteristic of older cohorts is that they are living longer. But there are other significant differences as well. These include cognitive improvements (the “Flynn effect” applies at all ages (3)), better education, less disability than was experienced by age-equivalents previously, and as a consequence, increased healthy life expectancy. Whilst it is very hard to find ‘good studies’ testing whether the percentage of one’s life in disability is changing as we live longer, the broad brush consensus is that the proportion lived in good health is holding up (4). Put another way, people are healthier at older ages.  A review of the results from the New York Marathon found that the average finishing time of the 50 fastest 70-79 year olds was falling by 2 minutes a year, the most rapid improvement of any age group (5)!

It does not take too much reflection to realise that as the population ages, it is both healthier and the age at which you have 15 years of expected remaining life expectancy rises. The Sanderson & Scherbov paper elegantly brings this home, and makes it explicit. The implications for society are profound, most obviously that demographic and other social projections cannot naïvely assume that the expected health status of a 75 year old in 20 years is going to be the same as today. Critically, there is little logic in keeping the age of eligibility for New Zealand superannuation at 65.

3 thoughts on “Faster mortality decline – slower population ageing. How could this be?”