In a study we just published, we found that whilst there have been declines in all-cause mortality rates, over time, for Māori, Pacific peoples and the European/Other ethnic group, there are still striking mortality gaps that need to be addressed. Ethnic mortality inequalities are generally stable or even falling in absolute terms, but have increased on a relative scale. To further address these inequalities, NZ policy-makers have many options, ranging from equalising socio-economic factors between ethnic groups, improving access to health services, tobacco control and addressing the obesogenic environment.

Recently, especially in the United States, there has been a growing concern that social inequalities are increasingly leading to widening inequalities in health (1). Other recent research highlights the overall importance of inequalities to health, with a meta-analysis reporting that low socio-economic position was the third most important risk factor for premature mortality (2).

In our just published study (3), we update previous studies to include deaths from 2006-2011 and look at the changing ethnic inequalities in mortality rates in NZ over 30 years. We used cohort studies of the entire NZ population using probabilistically-linked census and mortality data from 1981 to 2011 (68.9 million person years of follow-up). All-cause mortality rates were highest for Māori, followed by Pacific peoples then European/Other. These rates declined in all three ethnic groups over time with Pacific peoples experiencing the slowest annual percentage fall in mortality rates, then Māori, with European/Other having the highest percentage falls (see the Figure below). 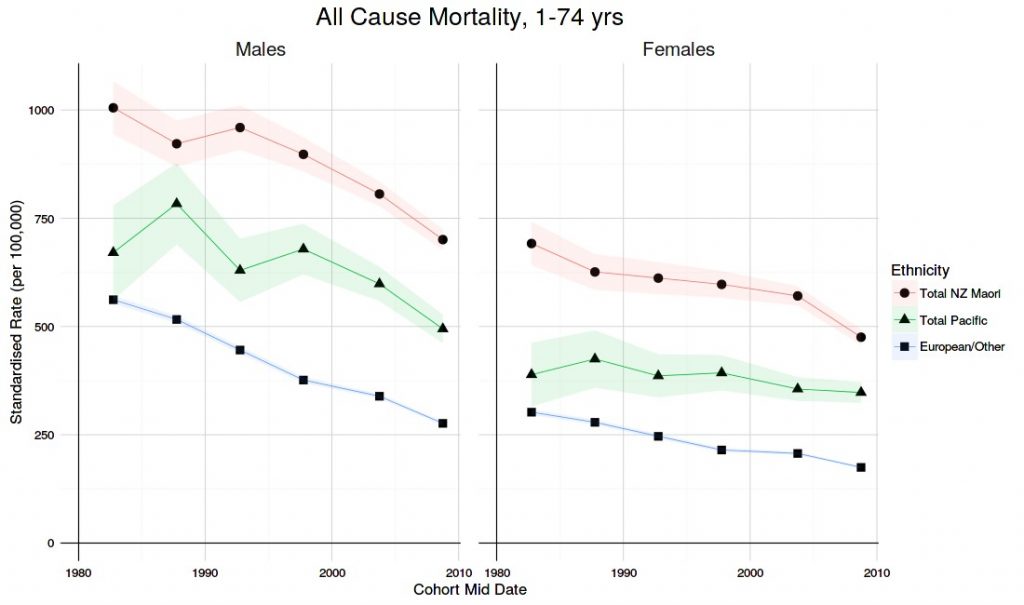 Note: You can check out all the data above, and make your own versions of such graphs and more using the NZCMS/CT Data Explorer.

Whilst falling mortality trends are always welcome, there are still wide mortality gaps between ethnic groups. While absolute inequalities, for both Māori and Pacific males compared to European/Other males have been falling since 1996, they still are excessive (see the first Figure below for the gap in rate differences). Also relative inequalities are increasing (see the second Figure below for the gap in the rate ratios). 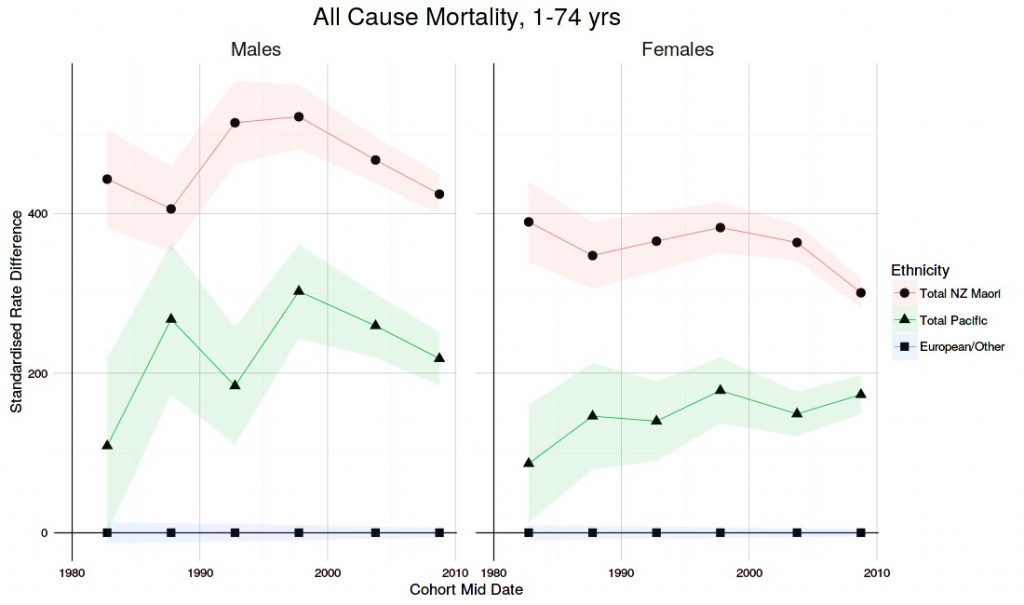 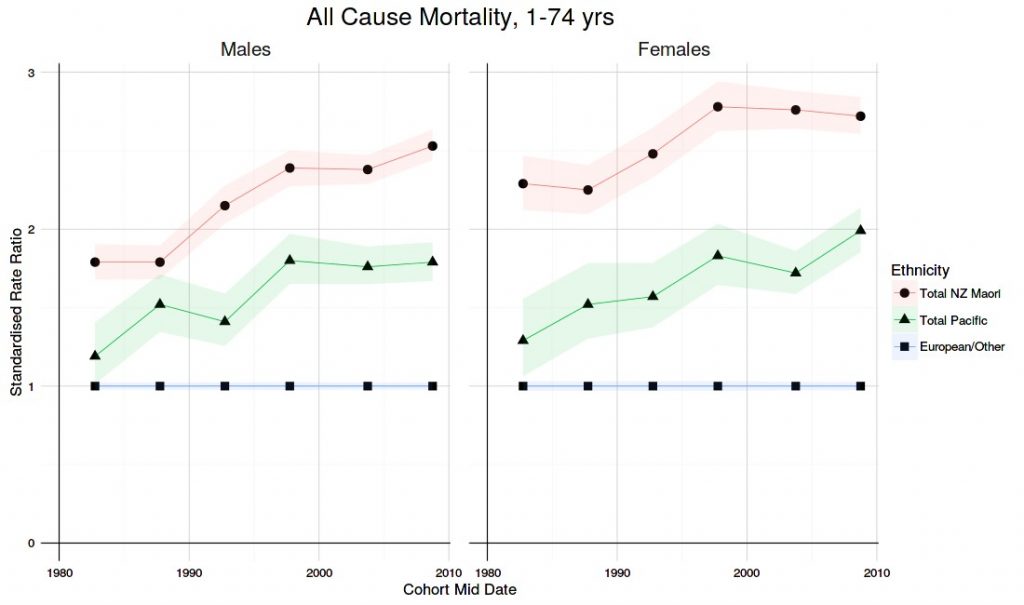 Some favourable progress – but what can still be done?

While the decline in all-cause mortality rates for all ethnic groups in NZ is a favourable finding from a public health perspective, there is a need to accelerate progress on reducing absolute and relative health inequalities. There are many plausible ways that these inequalities could be further reduced – as we now detail.

Macro-economic and social policies: Previous research for this country has suggested that the widening in ethnic inequalities in health in the 1980s and 1990s was contributed to by structural economic changes to liberalise the market economy (4). Indeed, further risks for sustained inequalities may come if increased automation and other forces associated with globalisation result in increased unemployment and higher insecurity of employment among lower-skilled workers (5). We focus in this blog on areas most related to health interventions (see below), but note that interventions in the social policy domain that might help include: raising educational levels for Māori and Pacific peoples, increasing employment opportunities, increasing job security, higher tax credits for low-income families, and higher minimum wages. Indeed, we note the progress in the educational domain with the increases in the percentage of Māori and Pacific school leavers with school qualifications (6).

Addressing the obesogenic environment: As with many other high-income countries, a high body-mass index (BMI) is now the largest single cause of health loss overall in NZ (7). Obesity is a likely driver for inequalities from CVD, diabetes and some types of cancer for both Māori and Pacific peoples (given much higher burdens of overweight and obesity (8)). Indeed, detailed analysis of both cancer incidence and mortality by us (9) (see also this blog) has found that ethnic inequalities have actually widened most in the incidence of obesity-related cancers in NZ (particularly breast, endometrial and colorectal cancer). While the NZ Government is to be commended for adopting the idea of an obesity control strategy, the actual strategy is deficient in many ways. In particular, there is a need for interventions to address the obesogenic environment such as:

For example, in Berkeley, California, a sugary drinks tax is working to reduce sales and consumption of these drinks (10,11), with water and milk sales increasing after the tax (11). If such measures were carefully designed and appropriately implemented in NZ, they could well contribute to reductions in inequalities. For example, there is some evidence for a greater reduction in sugary drinks consumption by lower socio-economic groups in Mexico after the new tax there (12). Also Berkeley’s excise tax on sugary drinks reduced consumption in low-income neighbourhoods (10).

Advancing tobacco control: The second most important risk factor causing health loss in NZ is tobacco smoking (7). Our results for ethnic inequalities in lung cancer (and also for CVD, and other cancers) reflect the marked ethnic gradient in smoking in this country: both currently and as projected into the future (13). Achieving a smokefree NZ has been estimated to be likely to result in significant future increases in life expectancy for all New Zealanders, but particularly so for Māori (14). While the NZ Government has recently implemented a number of useful measures to reduce tobacco smoking (eg, extension of the yearly programme of tobacco tax increases until 2020, a law requiring standardised tobacco packaging, and removal of point-of-sale tobacco displays), more substantive action is needed to achieve the Smokefree 2025 goal, particularly so for Māori (13). Interventions that may particularly benefit Māori, and hence reduce tobacco-related inequalities, may include tobacco tax increases beyond 2020 (as per NZ modelling work (15) indicating that tobacco tax delivers higher per capita health gains for Māori and is a highly cost-saving intervention). Also there could be more mass media campaigns to support quitting that are specifically designed for a Māori audience eg, the successful “Its About Whanau” campaign (16,17). More profound interventions to ensure rapid progress of the tobacco endgame towards the NZ Government’s 2025 goal might include:

Fortunately, the NZ public appear to be broadly supportive of such endgame strategies (23). Such strategies are also consistent with international calls to end the global tobacco epidemic (24).

Accelerating declines in CVD: The decades long decline in CVD rates is a public health success story for NZ – but further reductions could reduce ethnic inequalities in health. Modelling work for NZ has suggested that there are many population-wide dietary salt (sodium) reduction measures that are likely to provide greater per capita health gain for Māori relative to non-Māori (25-27). CVD risk screening in primary care is high, albeit with some ethnic inequality for Māori vs non-Māori (at 86% vs 92% coverage respectively) (28). Appropriately, the target age-range for such screening for Māori already starts at a younger age to assist with achieving equity goals. Also of note is that there have been successful campaigns to increase preventive CVD pharmacotherapy among Māori eg, around taking statins (29).

Improving health services: Another area for health service improvements is in terms of receipt of various cancer treatments between ethnic groups in NZ (30) (a pattern that is also seen internationally (31)). We acknowledge that some of these inequalities are challenging to address given higher levels of co-morbidities among ethnic groups can be perceived as limiting treatment options. But further improvements in diabetes care may also be a likely fertile area for progress here. The enhanced use of cancer care coordinators might also help modestly (with our previous work suggesting that these are a likely cost-effective intervention in the NZ setting (32)). Health services that screen and treat the bacteria that causes stomach cancer may also particularly benefit Māori and Pacific peoples (with this likely to be cost-effective in modelling work we have done (33) [see also this blog]).

Our new study found favourable declines in all-cause mortality rates, over time, for Māori, Pacific peoples and the European/Other ethnic group. Also of note was that ethnic mortality inequalities are generally stable or even falling in absolute terms, though increasing in relative terms. To further address both absolute and relative inequalities, NZ policy-makers have many options. These will tend to benefit the health of all groups in NZ society: particularly in the domains of tobacco control, the obesogenic environment and improving health services.

This entry was posted in Uncategorized and tagged ethnic inequalities, Mortality by Kate Sloane. Bookmark the permalink.