Recently, ASH New Zealand released findings from the 2021 Snapshot Year 10 survey, a large cross-sectional survey of young people aged 14-15. The survey provides important information on vaping and smoking among an age group where dependence on nicotine may develop, and the findings enable researchers and policy makers to assess the impact of different policies.  While the survey report reveals declining daily smoking, it also shows increasing vaping, particularly among Māori. We explain why rising vaping prevalence should be of concern and may warrant additional regulatory measures.

The Year 10 Snapshot survey began 30 years ago and has been conducted annually for more than 20 years (apart from 2020, when COVID-19 prevented data collection). Each year, between 20,000 and 30,000 Year 10 students aged 14-15 participate in the survey; the data have been used in numerous peer-reviewed publications, informed policies ranging from plain packaging to smoke-free cars,[1, 2] and provided key information on smoking and related behaviours.[3]

The findings from 2021 contain some good news. Daily smoking among Year 10 students has declined and fallen to an all-time low of 1.3%, from 2.1% in 2019 and 1.9% in 2018. Importantly, daily smoking has declined among all ethnicities; among rangatahi Māori daily smoking declined from 5.8% in 2019 (5.2% in 2018) to 3.4% in 2021, though inequities between Māori and non-Māori/non-Pacific remain and must continue to be addressed. Daily smoking prevalence among Y10 Pacific students declined, though not significantly.

However, daily vaping has increased markedly and may indicate nicotine dependence, thus minimising daily vaping among young people should be an important priority.[3] In 2018, 1.8% of survey respondents reported using an e-cigarette on a daily basis; that proportion had risen to 3.1% in 2019 and had more than trebled to 9.6% in 2021. Increases were especially high among Māori, where daily vaping rose from 5.9% in 2019 to 19.1% in 2021 (daily vaping was not reported by ethnicity in the 2018 Factsheet). Daily vaping had also increased substantially among young Pacific students (from 3.9% in 2019 to 10.6% in 2021). The vast majority of daily vapers (89%) report that they usually vape with nicotine.

What do the data tell us about smoking and vaping?

Some commentaries have argued that vaping is displacing smoking; if that were the case, we would expect to see increases in vaping offset by equivalent decreases in smoking, with stable (and, ideally, declining) overall nicotine use. However, the Snapshot Y10 data do not show a simple displacement effect, and overall daily use of nicotine has markedly increased from 2018 to 2021 because the increase in daily vaping prevalence has exceeded the decline in daily smoking. We thus calculated the proportion of young people who were exclusively smoking, exclusively vaping, or both smoking and vaping, to reveal patterns in overall nicotine use. 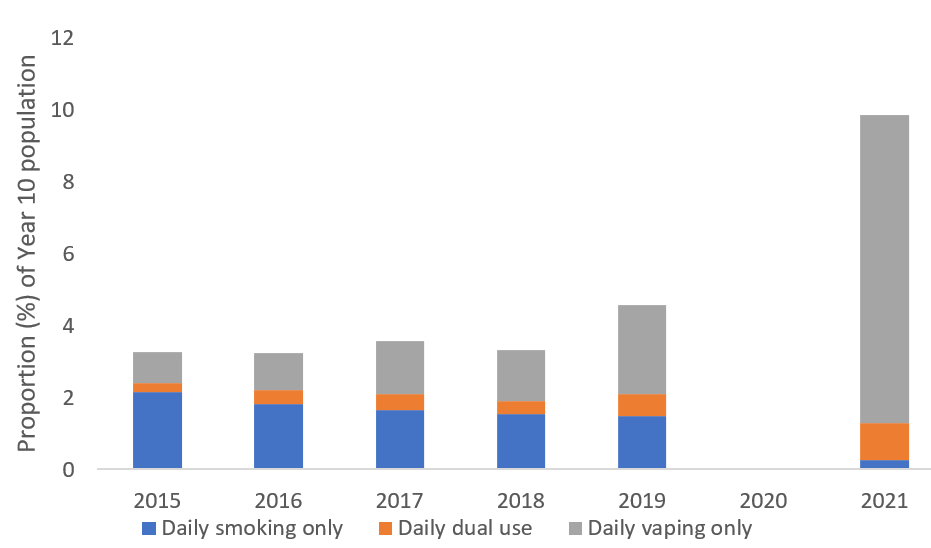 How concerned should we be?

Although vaping is less harmful than smoking, it is not harmless. A recent review found evidence of negative impacts on the respiratory, oral and mental health of adolescent users and reported these effects were greater for dual users than for either exclusive smokers or exclusive vapers.[4] As Figure 1 shows, dual use prevalence increased markedly between 2018 and 2021. Furthermore, recent research has estimated that long-term vaping could be substantially more harmful than previously thought.[5] It is also important to recognise that harm from vaping may not only be seen as physical, particularly among Indigenous peoples.[6] The public health implications of widespread adolescent vaping thus give cause for concern.

Rising nicotine use is also consistent with tobacco companies’ predictions of an “additive” market. As we noted in an earlier blog examining a presentation made by British American Tobacco (BAT) to investment analysts in 2018, a slide entitled “nicotine consumer pool continues to grow” suggests displacement of smoking by vaping did not feature in the company’s strategic agenda.[7] Nor is BAT alone in efforts to grow its overall nicotine product market; a comprehensive report on Philip Morris International concluded “Novel products have been repeatedly used to stem and reverse declines in cigarette sales”.

Analyses of tobacco companies’ documents and presentations are consistent with the continuing aggressive marketing of vaping products to young people in Aotearoa.[8] While Section 23 of the Smokefree Environments Regulated Products (Vaping) Amendment Act 2020 prohibits publication of regulated product advertisements, we have found many examples of online promotions since the Act came into effect.[8] The examples below, taken recently from the IQOS NZ website (which features both heated tobacco products and vaping products (e.g., Veev)), illustrate aspirational, lifestyle marketing likely to appeal to young people that has continued post-legislation. The images feature price discounting, competitions, and rewards for referring friends. Although vaping websites may include age verification processes, these can be circumvented simply by entering a false date of birth; the content is thus easily accessible to young people. It is not clear whether the Ministry of Health monitors industry marketing and enforces provisions designed to deter vaping uptake among young people.

Screenshot from the IQOS NZ website of a price discount promotion for Veev (a vaping product) taken on 2 March, 2022.

There is considerable debate whether vaping is causally linked to smoking, and the Snapshot Y10 survey is not designed to address this question. Nonetheless, it reports that nearly two thirds of daily vapers who had tried smoking had first tried vaping. This finding is in line with wider research that has found young people who vape are more likely than are young people who have never vaped, to go on to smoke.[9] While these findings do not demonstrate that vaping is causally linked to smoking (other explanations, such as the “common liability” hypothesis, also need to be examined) they provide no grounds for complacency.

The final reason why we believe there are reasons for concern about vaping among young people is because measures included in the Smokefree Environments Regulated Products (Vaping) Amendment Act 2020 to restrict young people’s access to diverse, youth-oriented flavours are being circumvented. There is strong evidence that confectionary and fruit flavours appeal to young people;[10] indeed the Snapshot Y10 survey found that around 13% (actual estimates not reported) of daily vapers reported their main reason for vaping was “like the flavours” and a further 31% cited “I enjoy it” as their main reason for vaping (flavours contribute to enjoyment, alongside the performative and social aspects of vaping).

The NZ vaping legislation responded to concerns that youth-oriented flavours may encourage vaping uptake by differentiating between generic retailers, such as dairies and service stations, and specialist vape stores. The former outlets may sell only tobacco, menthol and mint e-liquid flavours, while specialist vape stores may sell the full panoply of flavours.

The Snapshot Y10 survey results have reported on young people’s “usual source” of vaping products. Given these products are not able to be sold legally to people aged under 18, it is very concerning to see the survey found that 8.7% of daily vapers reported buying their vape from a specialist vape store.  It is also concerning that small dairies are evolving into specialist vape stores by sub-dividing their premises; this strategy, illustrated in the image below, means specialist vape stores, with products that may be clearly visible from the footpath, are now located in residential neighbourhoods.[11]  Although the Snapshot Y10 survey found only 3.5% of daily vapers reported purchasing their vapes from a supermarket or dairy, because the question used asked about young people’s “usual source” (and did not explore all the sources used) we do not know the total proportion of young people who purchased vaping products from either specialist or generic outlets. Furthermore, the survey was conducted before the development in dairies we have described, thus it will be important to track what impact these changes in outlet design and product availability have had. 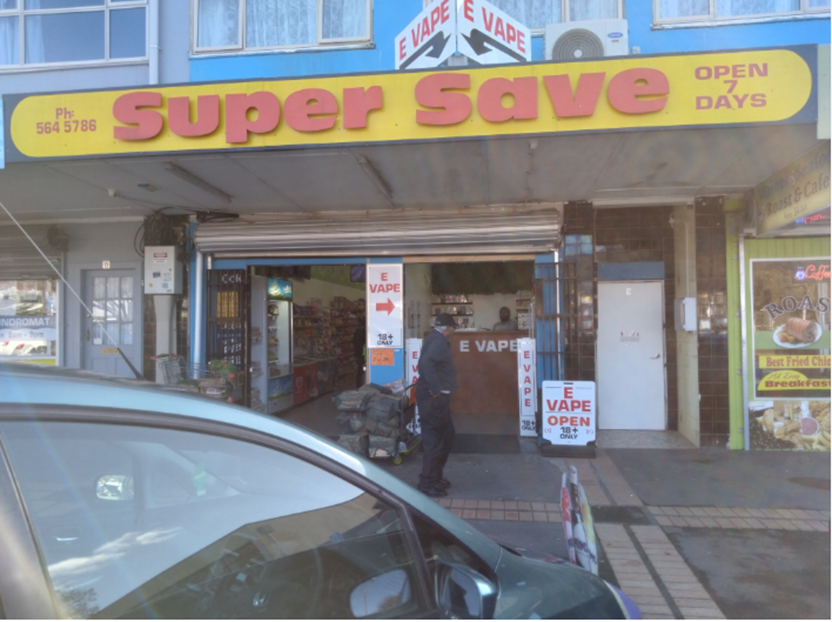 In summary, it is very heartening to see declining smoking prevalence, particularly among rangatahi Māori. However, overall daily nicotine use has increased markedly in NZ youth, particularly among rangatahi Māori of whom 19.1% reported daily vaping. Claims that a higher proportion of daily smokers than never smokers vape daily overlook the very different sizes of these groups and the fact that 27% of daily vaping occurs among young people who have never smoked.  Unfortunately, the recent NZ legislation designed to protect young people from marketing by vaping and tobacco companies is not providing the protection they deserve. Social media marketing of vaping products has continued and may be easily accessed by young people who have never smoked; furthermore, the appeals used are likely to resonate more strongly with young never smokers than with people who have smoked for many years and who could potentially benefit by switching to vaping. Initiatives by dairy owners to transform into specialist vape stores will see the full range of e-liquid flavours available in community neighbourhoods. Unless the NZ legislation is appropriately strengthened and enforced, thousands of New Zealand children will continue to be exposed to vaping products and be at risk of vaping uptake.

This entry was posted in Uncategorized and tagged nicotine, Smoking youth, Vaping youth by carra86p. Bookmark the permalink.