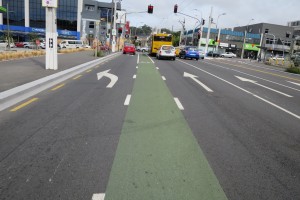 Active transport is important for health and sustainability. But no one has previously looked systematically at how NZ cities support cycling and walking. Therefore, a new study has been performed and is now published online. This blog reports its main findings.

Walking and cycling for transport, instead of using cars, is a sustainable (lower carbon emissions), egalitarian and, mostly, fun way of getting around. Many cities with high levels of cycling and walking, such as Amsterdam and Berlin, are exciting and dynamic places to live.

The other benefits of ‘active transport’ (i.e. walking and cycling) are also well-known. Active transport is good for health, the environment and the economy (1-3). But how well are cities in NZ doing in this area?

In this new study, which is a baseline assessment, we have compared the six largest cities in NZ (Auckland, Tauranga, Hamilton, Wellington, Christchurch and Dunedin) for some of the key inputs to cycling and walking. These cover city council policies and programmes, levels of funding, amount and type of cycling and walking infrastructure, and people working on these areas. The key outputs are who cycles and walks, how safe it is, and how healthy the populations of each city are.

Main findings from the new study

To obtain the information for the report we surveyed councils, collected information from council websites, and analysed information from the NZ Health Survey, the Household Travel Survey, the Census, and the Crash Analysis System. Our study was based, with their permission, on a successful series of reports undertaken in the USA by the Alliance for Biking and Walking. One of our aims was to find out how readily we could gather and analyse information on cycling, walking and health in the cities. It took much more work than we expected: customised data extraction was required to ensure standardised geographic boundaries. Data supplied by the city councils were sometimes unclear or incomplete. But this pilot study found that benchmarking is feasible in the NZ setting, and laid the groundwork, with recommendations, for future benchmarking studies.

One of the main benefits of this study was providing a baseline – and so repeating it regularly and tracking changes over time will be valuable. It will tell us which cities are doing well (or not so well) at increasing walking and cycling and what they are doing to achieve this.

We know from visiting or seeing cities in other countries where there are higher levels of cycling and walking, as well as from scientific research, that what happens at a local level (as well as national) is important for cycling and walking levels (4-6). This report is the first attempt to try and systematically document the important components determining cycling and walking levels in the largest NZ cities. We anticipate it will be useful for advocates, policy-makers, researchers and planners as they embark on the necessary project of transforming our cities. But crucially it will need to be repeated regularly so progress towards more liveable and healthy cities can be clearly monitored.

3 thoughts on “Cycling and walking in six NZ cities: Where are we at?”