The Government has an action plan to tackle childhood obesity, but it lacks a tax on sugary drinks – a strategy for which there is good evidence.  A new Treasury Report on soft drink tax price elasticities has just emerged. It has the look of a strategically published document that if and when – during election year – certain politicians need to defend non-action on taxing sugary drinks, they can point to this Report and obfuscate.  Indeed, this New Zealand Treasury Report has already been used for this purpose in Australia. We critique this Report in this blog, with a view to preventing its misrepresentation and to encourage a more informed discussion on taxing sugary drinks.

There are no magic bullets to reduce obesity. Therefore a comprehensive plan for obesity will, of necessity, contain strategies which have incomplete evidence of impact by themselves, but collectively may help at the societal level. For example, the Government’s action plan for childhood obesity has 22 strategies, none of which have been proven to reduce obesity. But there is one strategy which has been deliberately left out of the plan – a sugary drinks tax, which actually has far more evidence of effectiveness than the other 22 strategies.

The WHO’s Commission on Ending Child Obesity (chaired by New Zealand’s Sir Peter Gluckman), the Heart Foundation and New Zealand Medical Association, and many other international and national organisations, recommend taxing sugary drinks. An increasing number of countries now have a sugary drink tax in place, including the planned introduction in the UK (and a total of 19 countries now have some taxes on food or beverages). Why? Many reasons.

First, there is actually evidence it works. For example, rigorous peer-reviewed analysis of sugary drink tax in Mexico demonstrated that consumption has fallen below that projected without tax (and see PHE Blog). This beneficial impact has persisted into the second year after the tax according to a just published study in the journal Health Affairs. Likewise the tax in Berkeley, California has shown a beneficial impact.  Numerous modelling studies have demonstrated health gains from a sugar-sweetened beverage (SSB) tax – including a recent study in the journal PLoS Medicine by some of us.

Second, it is discrete – just sugary drinks. So whilst not a ‘radical’ tax across – say – sugar in the whole food system that would likely have (much) greater health gains, it is a good place to start with food taxes to help address the obesity epidemic and protect the health of children (including reducing dental decay).

Third, there are substitutes for sugary drinks – namely non-sugary drinks, and (heaven forbid) free water from taps and drinking fountains. For example, the Mexican data indicate an increase in both untaxed beverage purchases and in bottled water sales and an econometric study just out from Chile shows a soft drink tax switches consumption from SSBs to water.

And fifth, it would raise revenue for health promotion.

Possible reasons why some governments do not introduce new food/beverage taxes include powerful opposition from commercial vested interests (the sugary drinks industry), but also an anti-tax ideology. While these are undoubtedly the case for New Zealand, the purpose of this blog is not to argue on these issues (see elsewhere) but rather to focus more on the evidence around likely effectiveness.

Specifically, our focus in this blog is a recent Treasury Report titled “Sugar Taxes and Changes in Total Calorie Consumption: A Simple Framework”.1  Mathematically the report is a nice read (to those so inclined) in demonstrating that mathematically it is possible that a sugary drink tax might actually increase overall caloric consumption – by facilitating people drinking a greater volume of slightly less sugary drinks (or even shift to other energy dense food) thereby increasing total caloric intake.

The Report concludes: “It was demonstrated that the focus of attention needs to be much wider than a simple concentration on the own-price elasticity of demand for the commodity group for which a sumptuary tax is envisaged.” We agree – and see a previous blog by us on this. But there are more debatable sentences elsewhere like: “In view of the limited empirical information about this elasticity [of total caloric intake], future empirical work is required.” We partially agree. Yes, elasticities capturing exactly how people substitute other products in response to a price increase in the target good are scarce. But also “no”, we know enough about SSB taxes (and food taxes in general) to have confidence that net health benefit will accrue from SSB taxes.

The crux of our view (see details in the Appendix of this Blog) is that it takes highly implausible cross-price elasticity values and market volume shares to generate a net increase in caloric intake using the formulas in this Treasury Report. Indeed, the real world evidence from Mexico is that (zero-calorie) bottled water sales have increased after the SSB tax. Furthermore, there is no discussion in the Report around how smart policymakers could potentially address any risk of shifting to other high caloric beverages by for example:

Why are we concerned enough about this Treasury Report to write about it? Because we are concerned it is going to be used in overly partial debates by opponents of soft drink tax to obfuscate. We developed this concern a month ago – only to have it confirmed last week. One of us – TB – was doing a live TV debate in Australia on food taxes and subsidies. Nick Cater – a right wing columnist for the “Australian” newspaper – pointed to this Treasury Report as “why the New Zealand Treasury came out and rejected it [sugary drink tax]” (see 4 minutes into video clip). It would appear our concerns were not misplaced.

We hope commentators and the media in New Zealand are more thoughtful and do not automatically accept this misrepresentation of a mathematical Treasury Report that is a long way from the totality of real world evidence. We also encourage the Treasury to consider a more detailed analysis of the evidence (eg, building on a review of the international literature and recent work from Australia). This would do more to genuinely advance the discussions on the pros and cons of a SSB tax that thoughtful democratic societies need to have.

Appendix: Detailed Analysis of the new SSB Report on the Treasury website

There is a lot going on in this new Report and it has some nice mathematics. But the Report runs a line that is simply not plausible in the real world. In the figure below we produce some of the results of this report, using the author’s own equations. The key elements are as follows: 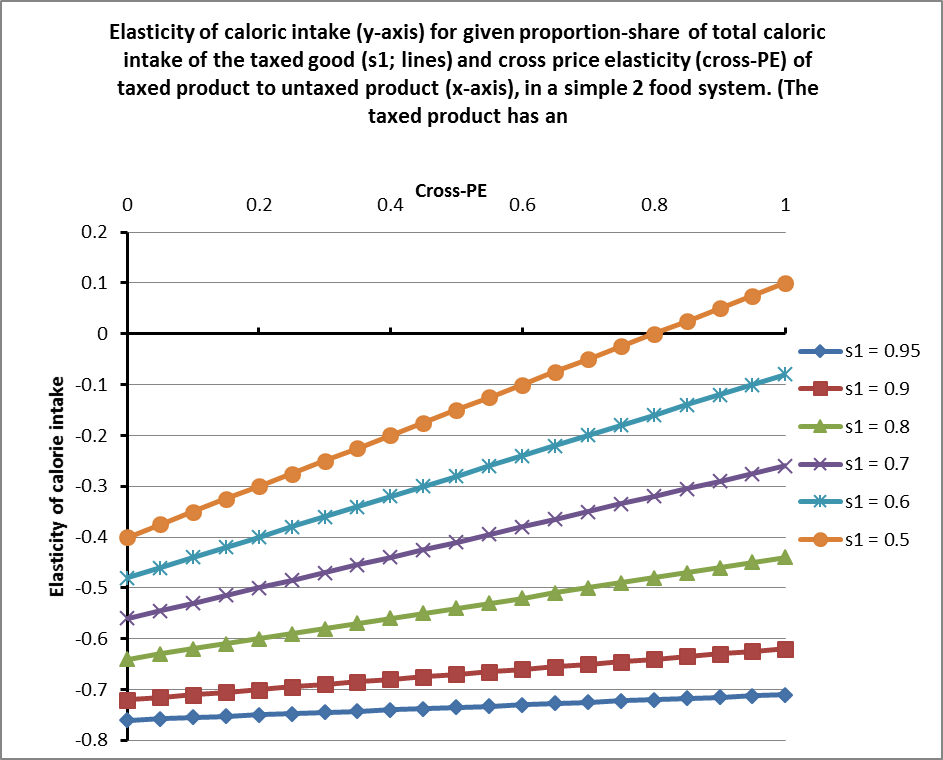 Imagine that the non-sugary drinks had 25% of the calorie per volume of the sugary drink – then the orange line is equivalent to 80% of all drinks sales being non-sugary drinks. This is not the situation anywhere in the world that we know of (just look at a typical supermarket aisle with beverages – there is a vast abundance of sugary drinks compared to diet drinks or bottled water)! But, maybe it will happen one day… and if it does, then the cross-PE will (by mathematical necessity) come down. Why? Because if non-sugary drinks were 80% of the market sales by volume, and the cross-PE was (bizarrely) 1.0, that means the volume of non-sugary drink sales would go up five-fold greater than the reduction in sugary drinks, i.e. 1.0 [cross-PE] × 80% = 5 × |(-0.8 [own-PE of sugary drinks] × 20%)|. That seems extremely implausible to us, cross-PEs will be expected to fall as the substitute food/beverage increases it volume of sales.