A new study has estimated the surprisingly high level of harm from air pollution. This annual harm includes the premature deaths of more than 3300 adult New Zealanders and more than 13,100 hospital admissions for respiratory illness and heart disease. The annual social costs resulting from this pollution was estimated at $15.6 billion. Fortunately there are many ways to reduce air pollution and we discuss five key ones in this blog. These range from free public transport to reform of the electricity market to lower costs to citizens. 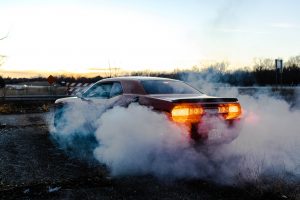 Image by Xavier Gonzalez from Unsplash

The latest iteration of the Health and Air Pollution in New Zealand Study (HAPINZ 3.0) has summed up the health costs of air pollution, drawing on comprehensive air quality monitoring data from 2016.

The HAPINZ researchers estimate that anthropogenic (human-caused) air pollution in that year caused the premature deaths of more than 3,300 adult New Zealanders. This is not a small number, representing about 11% of all deaths in NZ in 2016.

The estimated costs of these health and social impacts from human-made air pollution in 2016 amount to $15.6 billion. This price tag not only reflects the direct costs incurred in the health system but also costs arising from loss of life, lost quality of life and lost productivity.

Considering anthropogenic sources of PM2.5, the main culprits are coal and wood fires used in home heating, which are responsible for 74% of the $6.1 billion cost associated with PM2.5 pollution. Other contributors are motor vehicles (17%), and windblown dust (8%).

The even more important air pollutant, NO2, is estimated to cost the country $9.5 billion in terms of health and social impacts. Nearly all NO2 pollution comes from motor vehicles, and disproportionately from diesel vehicles.

The health impacts of air pollution from motor vehicles were a surprise to the researchers. The updated analysis in HAPINZ 3.0 revealed transport pollution to be a far greater contributor to loss of life and poor health in NZ than previously thought—accounting for more than two-thirds of the social costs of air pollution. The major role played by NO2 is a particularly important part of our new understanding of the air pollution hazard in NZ. 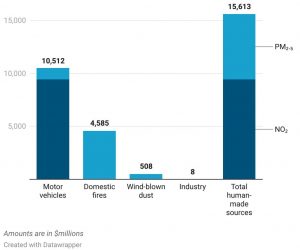 Figure 1: Social costs from human made air pollution (NO₂ and PM₂.₅) in NZ, by air pollutant and source of air pollution, 2016 ($millions) Source: HAPINZ 3.0. (please click on the image for a closer view)

The health costs of air pollution are not distributed evenly across the country. In terms of absolute number premature deaths, Auckland, with its larger population, suffered the most with an estimated 939 deaths in 2016.

However, when population size is taken into account, Invercargill emerges as the centre where air pollution is having the greatest impact (an estimated 219 premature deaths per 100,000 people aged 30+ years), followed by Christchurch City (206 per 100,000), and Waitaki District (191 per 100,000).

Readers can explore the variation in air pollution and its impacts across NZ using the HAPINZ 3.0 Dashboard.

The results of the HAPINZ 3.0 study highlight the immense cost air pollution incurs on New Zealanders’ health as well as the economy.

For potential solutions, we considered the findings of a systematic review on the control of urban air pollution3 and various NZ publications (eg, 4 5). Our top five solutions are as follows:

The HAPINZ study has revealed the surprisingly high level of harm from air pollution in NZ – to health and to the economy. Fortunately there are many ways to reduce air pollution and we discuss five key ones in this blog. Some of these could even reduce costs to consumers, such as free public transport.

*Author details: All authors are with the Department of Public Health, University of Otago Wellington. Prof Hales is a co-author of the HAPINZ Report discussed in this blog. This work on air pollution is supported by the philanthropic Gama Foundation (but this Foundation has no role in work content or the decision to publish).

This entry was posted in Uncategorized and tagged air pollution, reduce emissions by cooju60p. Bookmark the permalink.

One thought on “Air pollution in Aotearoa NZ: Five key ways to reduce the massive health and social costs”