Smokefree Aotearoa 2025 is a world-leading tobacco-control goal with origins in the vision of Māori leaders for Tupeka Kore (tobacco free) Aotearoa. A team led by researchers from ASPIRE 2025, supported by leading tobacco control researchers and practitioners, has prepared an Action Plan – “Achieving Smokefree Aotearoa by 2025”. An accompanying progress review found that the goal will not be achieved on current trends, and will be missed by a wide margin for Māori and Pacific peoples, thus supporting the urgent need for this Action Plan. 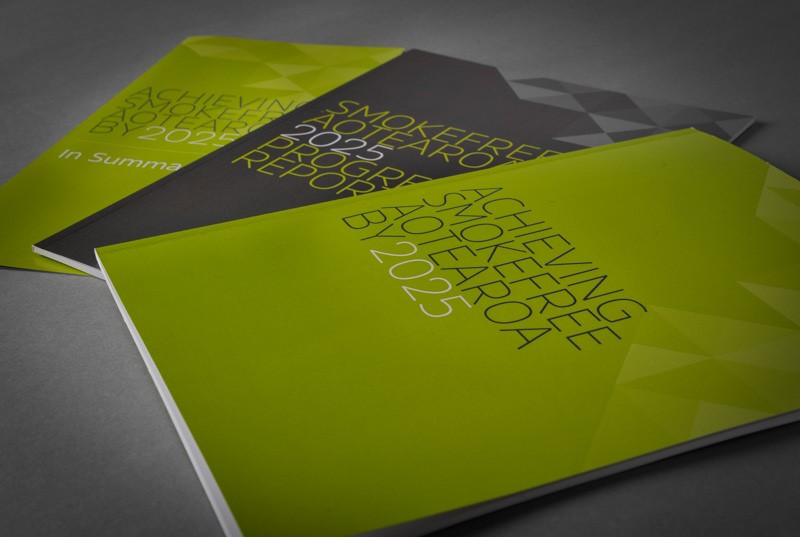 The Plan draws on a wide-ranging evidence review and consultation with over 30 New Zealand and international experts. It was also informed by a stakeholder consultation led by Hāpai te Hauora, focusing on Māori and Pacific experts, and including about 100 smokefree practitioners and community leaders.

The launch received widespread media coverage and support from the medical and health community and organisations; for example the Asthma and Respiratory Foundation have included full implementation of the Plan in its Political Manifesto for 2017. In an address at the launch, Associate Minister of Health Nicky Wagner promised to consider the recommendations.

The Action Plan reiterates the Government’s goal of reducing smoked tobacco use to less than 5%, and as close as possible to 0%, by December 2025. The goal applies to all population groups in Aotearoa New Zealand. Specifically, it is crucial that the goal is achieved for Māori and Pacific peoples.

The Plan includes a range of measures that draw on and extend recommendations from the Māori Affairs Select Committee, which first put forward the Smokefree Aotearoa 2025 goal (1). The Plan aims to reduce smoking prevalence by motivating, triggering and supporting smokers to quit, discouraging children and young people from initiating smoking, and encouraging smokers who can’t or don’t wish to stop using nicotine-containing products to switch completely from the smoked tobacco products they are currently using to deliver their nicotine intake, to safer alternative devices such as e-cigarettes instead. The key interventions aim to achieve these objectives by making smoked tobacco products less affordable, less available, less appealing and less addictive (see summary). 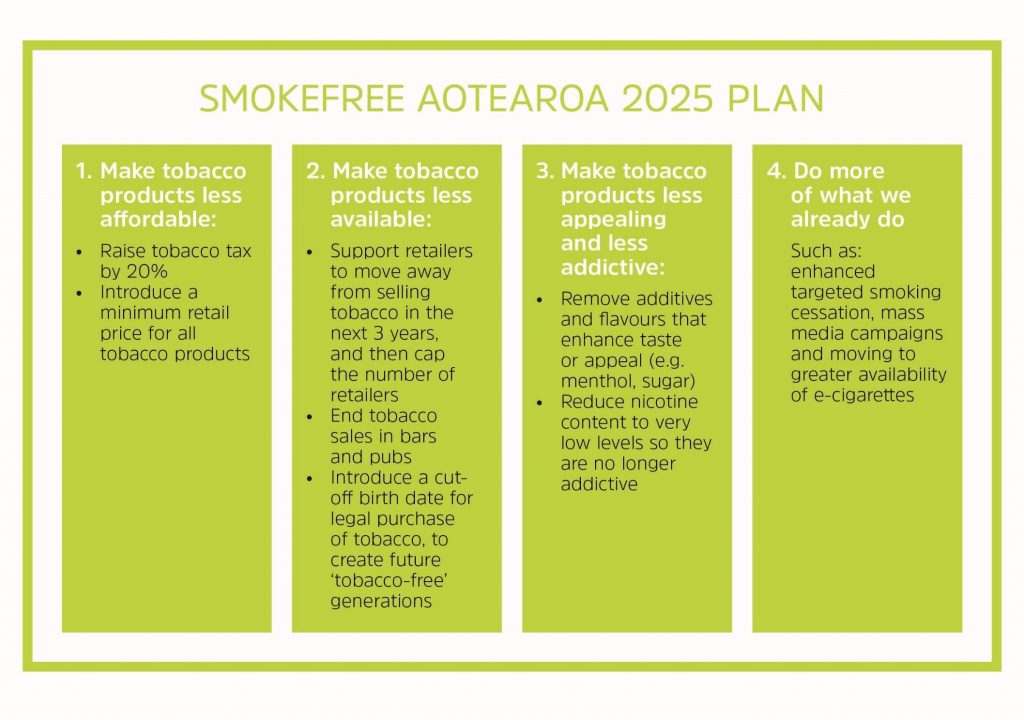 A combination of enhanced established measures and cutting-edge innovations

Increases in tobacco tax have been shown in numerous studies to reduce smoking prevalence and consumption, with some evidence that the greatest impacts are on disadvantaged smokers and young people (2). Modelling studies supports the effectiveness of tobacco tax increases and predicts greater health gain for Māori compared to non-Māori (3,4). We propose a 20% annual increase in tobacco taxation as well as a novel complementary intervention – a minimum retail price for tobacco products. This will prevent industry efforts to undermine the impact of the tobacco tax increases through differential price increases that keep the price of ‘budget’ brands low while ‘premium’ brand prices increase.

Interventions to reduce the availability of tobacco products were recommended by the Māori Affairs Select Committee but have not been introduced. There are currently no restrictions on the types or locations of places that can sell cigarettes and tobacco. However, there are increasing international precedents for restrictions on retail availability. Modelling studies suggest large potential beneficial effects for these measures, including reduced ethnic disparities in smoking (4,5). Stakeholders in the engagement process overwhelmingly rated reducing retail availability and supply as an urgent priority.

We propose a two-stage process: a transitionary phase-out period (by end of 2021) for existing retailers, followed by mandated restrictions of tobacco sales to a very limited (around 5% of the current number) of specified retail locations from 2022. In the Plan we suggest possible options for the type of retail environments which would be allowed to sell tobacco. In addition, we propose prohibiting the sale of tobacco from all alcohol on-licensed premises to weaken the link between smoking and drinking, and to reduce smoking initiation and relapse among ex-smokers in this setting.

The tobacco-free generation is an innovative idea which has been proposed in several jurisdictions but not yet implemented. In this intervention the legal age for purchase of tobacco products will increase annually from 2021, creating a tobacco-free generation of people born after a specified date who will never be able to buy tobacco products legally. This has the potential to greatly reduce smoking initiation, with modelling suggesting a particularly marked impact on reducing Māori smoking prevalence (4).

The Action Plan also includes innovative measures to reduce the appeal and addictiveness of tobacco products. This is an emerging area of tobacco control with growing activity internationally, for example through bans on menthol cigarettes and the recent FDA announcement of a public dialogue about lowering nicotine levels in combustible cigarettes to non-addictive levels. Currently, there is minimal regulation of the content of tobacco products in New Zealand.

The Action Plan includes a proposal to remove additives and flavours from tobacco products by 2021. The rationale is the high plausibility and emerging evidence (6,7) that additives like menthol enhance the appeal and palatability of cigarettes, particularly for young people and people trying to quit smoking. Removing such additives may help prevent youth from taking up smoking or becoming addicted.

There is currently no precedent for a mandated nicotine-reduction strategy. However, this intervention is included in the Plan (from 2023) as there is strong emerging supporting evidence and theoretical reasons to believe that it would greatly reduce smoking prevalence by prompting and supporting quit attempts and reducing the risk of addiction among young smokers (8).

The Action Plan also includes the implementation of planned measures such as standardised packs and new and enlarged pictorial health warnings; and enhanced and intensified existing interventions such as targeted smoking cessation support, smokefree mass-media campaigns; and new smokefree measures such as smokefree cars legislation to protect children.

Actions included in the plan alongside the key new interventions outlined above include: planned measures such as increased availability of nicotine-containing e-cigarettes and e-liquids, standardised packs and new pictorial health warnings; and enhanced existing interventions such as targeted smoking cessation support, smokefree mass-media campaigns; and new legislation such as smokefree cars to protect children.

Should we focus on promoting quitting or reducing initiation of smoking?

Reduced smoking prevalence can be achieved by increasing long-term quit rates and reducing the number of people starting to smoke. Modelling suggests both are required for rapid and sustained reductions in smoking (9,10). Every year about 11,000 young adults (including 3500 Māori) join the pool of existing smokers (Tu et al – unpublished analysis of census data). Large reductions in smoking uptake are therefore needed to achieve Smokefree 2025, particularly among Māori and Pacific populations, which have younger age structures and higher youth smoking rates. The measures included in the Action Plan are likely to impact on both cessation and initiation, with most affecting both.

Impacts on ethnic and socio-economic disparities in smoking

Current projections are that the goal (<5% prevalence) will not be achieved until around mid-2030s for the overall population and beyond 2060 for Māori (11). An important consideration for the choice of many of the measures included in the Action Plan was that they have been shown to reduce disparities in smoking and smoking-related disease between ethnic groups by socio-economic status (4, 12-14).

Putting the action plan into practice

There has been little attempt to publicise or mobilise support for the Smokefree 2025 goal by the Government. Initiatives like the recent commitment of the NZ Defence Force to be the world’s first smokefree military by 2020 have been far too rare. We recommend that a comprehensive strategy is implemented to mobilise the public, communities, stakeholders and decision-makers to support the Smokefree Aotearoa 2025 goal and the measures included in the Action Plan. For example, this could include establishing a Smokefree Aotearoa 2025 Charter to engage organisations and leaders across Aotearoa New Zealand, including iwi, Pacific and youth organisations, businesses and the social sector.

The Action Plan sets out a detailed timetable for key actions and proposes a new, overarching Smokefree Aotearoa 2025 Act as the main vehicle for introducing the recommended interventions. It recommends that this is introduced to Parliament by December 2018 and passed by December 2019, with measures requiring new legislation then progressively implemented. We also set out a monitoring and evaluation plan.

Despite evidence that Aotearoa/New Zealand is not on track to achieve Smokefree Aotearoa 2025, we strongly believe that with sufficient political will and community engagement the 2025 goal can be reached. The ‘Achieving Smokefree Aotearoa by 2025’ Action Plan sets out the required increase in the intensity and scope of interventions in an evidence-based and innovative approach; if fully implemented, we believe it will ensure the Smokefree 2025 goal is achieved for all peoples in Aotearoa.

The plan includes measures that will make smoked tobacco products less affordable, available and appealing and hence will motivate and support smokers to quit, and discourage young people from starting. It includes a role for harm-reduced nicotine products, such as e-cigarettes, to support quitting and provide an alternative for smokers who cannot or do not want to quit. This comprehensive approach will enhance the impact of e-cigarettes compared with an approach that focuses only on promoting their use.

A discussion of the role of e-cigarettes in achieving Smokefree Aotearoa 2025, and how the measures in the plan can facilitate maximising their positive impacts will be included in a future blog. This blog will also discuss options for how increased availability of nicotine-containing e-cigarettes could be implemented, and related regulatory issues; and will address some possible criticisms of the Action Plan.

Achieving Smokefree Aoteraoa 2025 will be one of New Zealand’s greatest public health achievements – particularly for Māori, who are worst affected by tobacco smoking. Implementing the Plan will empower the majority of current smokers who desperately want to quit, and support them as they strive to realise this goal. It will also empower the people of Aotearoa, who overwhelmingly support the Smokefree 2025 goal (15), by establishing a tobacco-free country in which their children and future generations are protected from addiction, preventable disease, and premature death due to tobacco smoking.

This entry was posted in Uncategorized and tagged Maori health, Smokefree Aotearoa 2025, tobacco control by dayhi34p. Bookmark the permalink.