Everyone knows that socio-economic inequalities in health exist – in recent times. But one thing we do not know is whether they have always been there. We have just published a study that looks at two historical datasets – with one of these suggesting life span differences by occupational class as measured 100 years ago. We find strong differences in life expectancy by occupational class among men enlisted to fight in the First World War (but not actually getting to the frontline). Whilst not definitive evidence (it is hard to get perfect evidence from 100 years ago!), it does suggest that socio-economic inequalities in mortality have existed for at least 100 years in NZ. In this blog we also take the opportunity to discuss what might be done to address the current inequality problem in this country. 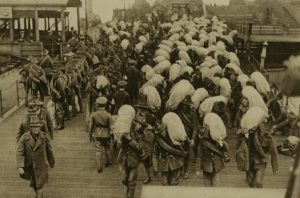 NZ troops, 1918 – our study found that the lifespan of non-combat troops varied by occupational class

In NZ, absolute differences in life expectancy between high- and low-income groups have been estimated at 6.5 years for males and 4.7 years for females in 2001 [2]. The gradients have been strongest for income, but they are also strong for small area deprivation and education [3, 4]. The ethnic health inequalities in NZ are even more marked [5, 6], and these have been described over long time courses [7, 8]. Eg, in 2011 there was a Māori vs non-Māori difference of 7.4 years for male life expectancy and 7.2 years for females [7].

But data on the historical relationship between SEP and health for NZ is less clear – and mainly relates to the post-World War Two period [9-11]. One study has found that in the late 19th century “stature varied by social class, with professionals and men in rural occupations substantially taller than their peers” [12]. (Average height of groups is a strong indicator of nutrition and socio-economic circumstances of the group; there is obviously a lot of individual variation within groups.) In contrast, however, there is no evidence of social class gradients from studies on pandemic influenza mortality in NZ in 1918 [13-15].

So what did our new study find?

In our new study we aimed to study lifespan by occupational class in two cohorts: one based on men on the electoral rolls in Dunedin in the period 1893 to 1902, while the other used an established cohort of male military personnel who were recruited for the First World War but never saw active service (full free text of our new study here [16]).

The first study of 259 men on the electoral rolls found no substantive lifespan differences between the high and low occupational class groups. But the second study of 2406 military personnel classified into nine occupational classes, found that men in the three highest occupational classes lived 3.5 years longer (95% CI: 0.3-6.8 years) than the three lowest classes (in the multivariable analysis adjusting for age in 1918 and rurality of occupation). The latter provides the earliest data to our knowledge suggesting differences in mortality by SEP in NZ prior to the 1960s.

Our findings for significant differences by occupational class in the larger military cohort are consistent with historical reports of social class [17, 18], material differences across NZ society [19] (see the Figure below), and the previously discussed gradient in height [12]. It also fits with historical evidence of former slum areas in some NZ cities (eg, the Te Aro district in Wellington [20]). 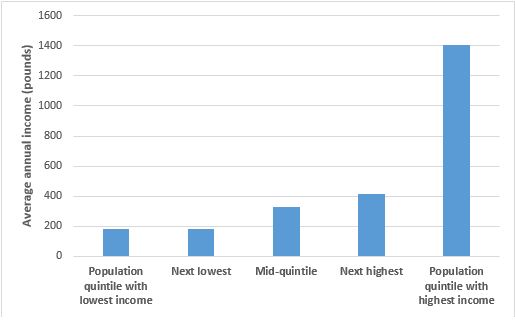 Figure: Average annual assessed income in NZ (in pounds [£]) by population quintile for tax returns for the 1922-1923 period (for details see our published work : Supplementary material)

Nevertheless, there were various limitations with studying both these historical cohorts (as we discuss in detail in our published study). Hence, neither of these cohorts can be considered definitive in establishing differences (or not) in lifespan by occupational class at this time – but certainly the military cohort results are still suggestive. So there is obviously a need for further research on this topic – which fortunately is becoming easier to do with the digitalisation of historical data.

But how can modern NZ do more to address health inequalities?

Understanding the past and its legacy impacts on the present are important – but it is even more critical to focus on reducing health inequalities now. Not only is this a matter of justice, but the sustained functioning of modern democracies may depend on reducing overall inequalities in incomes, wealth, education and health in a society. So what can be done? We list some key considerations and ideas for further societal discussions:

This entry was posted in Uncategorized and tagged inequality, life expectancy, Socio-economic position by dayhi34p. Bookmark the permalink.