The year 1917 was the worst year of the First World War for New Zealand from a premature mortality perspective, with 5547 deaths. We have just presented on this topic at a Symposium at Te Papa (Museum of New Zealand Te Papa Tongarewa) and in this blog we summarise the mortality patterns we described. We also consider to what extent some of these deaths may have been preventable with knowledge available at the time. 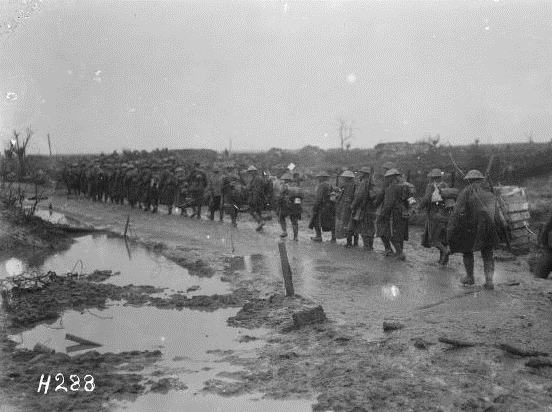 NZ Troops near Passchendaele in the First World War

Two specific battles generated much of the mortality burden in 1917: the Battle of Messines (June 1917), and the Battle of Passchendaele (October 1917). In the latter there was a single day (12 October) where 846 personnel were killed (the worst mortality impact in a single day from any event in all of NZ’s recorded history).

Most injury deaths involved outright death: “killed in action”. The next major category was “died from wounds” whereby the victim was medically assessed and then died subsequently (potentially up to weeks/months later). The proportion of injury deaths that were in this category did not trend downward in the last three years of the war (27.0% in 1916; 25.6% in 1917; and 28.8% in 1918). This was somewhat surprising, as every year of the war saw substantial medical and surgical advances. There were such developments as better organisation of medical services, growing use of transfusions, and better splints [2-4]. These resulted in documented survival improvements for a range of different types of injury [2].

But there are also possible reasons for why the high proportion of “death from wounds” continued. Improved evacuation processes could have meant more wounded dying after initial medical attention. There were also military developments in weaponry that might have increased the proportion of wounded eg, ongoing increases in the use of artillery as well as more specialist artillery fire. In addition, the use of automatic weapons continued to increase throughout the war. There were also probably battlefield-specific issues eg, even a minor wound might be fatal if it involved battlefield mud in the wound.

There were 250 deaths from disease in NZ military personnel in 1917 (4.5% of the deaths) but the true figure was probably higher (eg, if all the unclassified deaths were from disease then the percentage would be 6.3% [351/5547]). In a 20% random sample of the disease deaths (from examining online military records) we found that the dominant cause of these was pneumonia/bronchitis (33%), followed by tuberculosis (17%) and then meningitis, dysentery/typhoid and cancer (each around 8%).

These deaths from disease were statistically significantly more common in the Northern Hemisphere’s winter months (December to March) at 41.5% of the total, compared to the other two four-month groupings at 28.1% and 30.4% (April to July; and August to November respectively; p=0.007).

Could some of the deaths have been prevented with knowledge of the day?

There seems little doubt that the high mortality burden at the Battle of Passchendaele – specifically the 12 October offensive, was an avoidable mistake by military leadership. The offensive failed due to heavy rain and the inability of the artillery to destroy the barbed wire and concrete pill boxes that comprised the German defences. The poor decision not to delay the offensive was made by General Haig and was against the advice of his army commanders. Theorist and historian Major General JFC Fuller believed that Haig’s decision to continue with a: “tactically impossible battle … was an inexcusable piece of pig-headedness on the part of Haig” [5](p115) [6]. Another reason the 12 October attack failed so badly was that the Germans knew it was coming. They could see the preparations being made plus a British deserter on the night before the attack told the Germans of its exact start time.

Passchendaele also demonstrated another ongoing problem – the persistence with infantry charges in the face of machine guns and artillery. There is evidence that such patterns of charges continued to occur during 1917, as shown in this famous painting of an actual attack in late 1917.

The helmet design used by NZ troops was a further area where deaths might have been prevented. The “Brodie helmet” used did not have such good protection for the back of the head and the neck compared to the German helmet (the stahlhelm). Also the US version of the Brodie was stronger than the UK version used by New Zealanders [7]. The British soldier George Coppard also described his “tests” on “dud” Brodie helmets, presumably made of inadequate steel [8].

Some of the disease deaths in 1917 might have been prevented if more attention was paid to the living conditions for the troops. Reduced crowding in training camps, on troop ships and in accommodation behind the front lines, might have reduced deaths from pneumonia, meningitis, tuberculosis, and measles. Crowding and poor living conditions was also a likely factor in disease deaths earlier in the war at the military camp in Trentham, Upper Hutt in 1915 [9,10]. Also crowding has been implicated in the high mortality from a pandemic influenza outbreak on a NZ troopship in the last year of the war, 1918 [11].

In summary, 1917 was the worst year of the First World War from a NZ loss of life perspective. Yet this burden of death could well have been less if particular failures had been avoided in such domains as: military leadership, helmet design and crowded living conditions.