From 1 April 2018, the UK is putting in place a type of sugary drinks tax – actually a “soft drinks industry levy”. This blog reviews how they are doing it, early signs of its success, and ponders its relevance for NZ.  We also take this opportunity to point out some problems with a recent NZIER Report on sugary drink taxes.

This is not an April fool’s joke.  On 1 April, the British put in place a sugary drinks tax – actually, a tiered soft drinks industry levy.  The UK is joining many other countries and numerous jurisdictions that now have some variety of a sugary drinks tax,1 a public health measure that is rapidly gaining traction amongst countries concerned about their growing rates of obesity and diabetes.  In this blog we explain how the UK levy works (it is clever), what health impacts this levy might have (it is much more than via the direct price signal to the consumer), and critique a recent NZIER report on sugary drinks taxes. 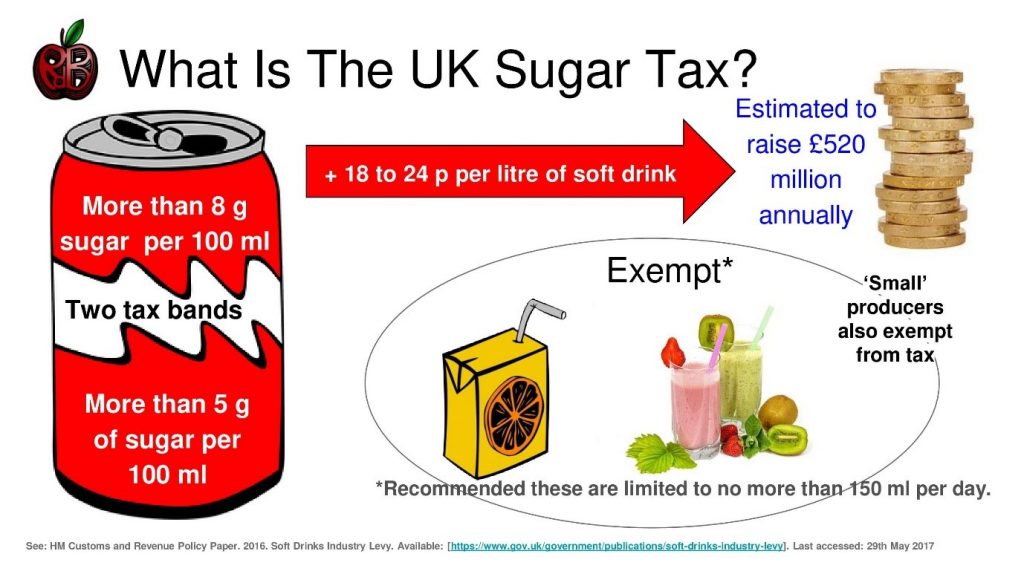 How does the UK soft drinks industry levy work?

Not all sugar taxes are the same – far from it. First, we are talking about sugary drinks tax;  the evidence on the negative health impacts of sugary drinks is much stronger than it is for any food. Second, sugary drink taxes can be configured in many ways – let’s jump across the ditch and use an excellent report from the Australian Grattan Institute on possible configurations.2  Below is a summarized version of one of their tables.

Summary of Table 5.1 from Duckett and Swerissen (2016) on differing types of sugary drink taxes and levies

* Our extra note: this issue of “eroded by inflation” could be addressed with annual inflation adjustments (as is used for tobacco and alcohol excise taxes in NZ). 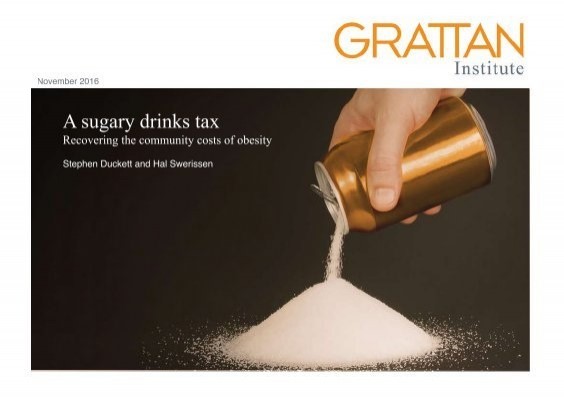 The Grattan Institute in Australia produced a high quality report in 2016 reviewing soft drink tax options, in contrast to the recent low quality effort of NZIER

The ‘best’ tax from a theoretical perspective is probably option 1 – a tax exactly on the key harmful ingredient: amount of sugar.  (For simplicity we are ignoring here other potentially harmful aspects such as the acidity of SSBs and the phosphate levels). But this type of tax might be administratively difficult.  The second option, the tiered levy on the soft drinks industry, is what is happening this month in the UK.  The industry is levied proportional to the amount of drinks they sell in each bracket of sugar level – we quantify its potential health impact below.  We suspect that this should be the best option for NZ.

The last option 4 is the one most people think of – a percentage tax at the point of sale, much like GST.  This has limitations.  John Gibson, an economist from Waikato University, has argued that this tax could just see some people shift consumption to cheaper ‘just as sugary’ drinks.  We agree that this is likely to happen to some extent with option 4 type taxes (indeed we see this with some shifting to budget brands after tobacco tax increases, even though overall tobacco consumption per capita keeps dropping each year in NZ).

What impact might a UK soft drinks industry levy have?

One of us (TB) was co-author on a paper in Lancet Public Health looking exactly at this issue.3  We quantified the impact in the UK on obesity rates, diabetes and such like, through three mechanisms:

The results suggested that Mechanism 1 was important, and will – we estimated – reduce obesity rates by around 1%.  Sure, it is no silver bullet for the whole obesity problem, but an impact it does make.  In public health policy, it usually takes many policies and changes in societal norms to address complex problems (e.g., tax is just one of many strategies that have reduced smoking in NZ). What was really interesting was that the impact of Mechanism 2, industry reformulation, was nearly twice as large.  Indeed, there are already some signs that the soft drinks industry in the UK is undertaking reformulation to move their products down to a lower tier of sugar levels. A growing number of UK beverage companies have announced intentions to reduce the sugar content of their beverages. One study recently reported a 10% reduction in the average sugar content of energy drinks in the UK with the impending soft drinks industry levy being the likely cause.4

Moreover, we have seen in the last two months that supermarkets in the UK are now – of their own accord – banning sales of caffeinated energy drinks to children less than 16 years old.  We cannot prove it, but it seems plausible that the new soft drink industry levy has helped tip British societal thinking. That is, as well as top-down change (the levy) there may be important bottom-up action whereby supermarkets realize they will have societal (=consumer) support for taking action.

A Report commissioned by the Ministry of Health, written by NZIER, has recently been getting air-time as an argument against taxing sugary drinks.  However, the Report seems to us to be seriously flawed.

The literature reviewed by NZIER also seems rather incomplete. Eg, for the 9 studies that we are aware of which have examined the impact of real world sugary drink taxes on health – the NZIER Report refers to just one of them.6 The missed ones include studies suggesting health favouring associations for BMI/obesity7 8 9 10 and for reduced cardiovascular disease11; along with studies showing no benefit for health.12 13 14 Yet even for two of the latter studies finding no association – the authors suggest the null finding is probably because of very low tax rates in the studied settings and they recommend higher tax rates.12 14 We are also surprised as to why the well-publicised report from the Australian Grattan Institute on sugary drink taxes published in 2016,2 was also missed by NZIER. Perhaps as a consequence of a suboptimal literature search strategy, NZIER have missed some key information and this may have limited the value of their conclusions.

Finally, why were no declarations of interest made by NZIER – has it ever received funding from the food and drinks industry? Potential conflicts of interest may bias results. For example, there is strong evidence that SSB experimental research funded by or associated with the beverage industry reports biased results that favours these funders’ interests.15  Good quality reporting to a government agency (the Ministry of Health) should require full declarations of interest.

Others have also critiqued the NZIER Report, eg Professor Swinburn of the University of Auckland in this op-ed. We hope that NZIER now gives some explanation of these issues so that the discussions around sugary drinks taxes is more thoughtful.

What now for NZ?

The NZ Government would be strongly supported by the scientific evidence if it did opt for an SSB tax. There are now several  real world health studies  – but there is also a wealth of literature on how other excise taxes on tobacco and alcohol are effective in general. Nevertheless, we favour consideration of the UK soft drinks industry levy option (on theoretical grounds and given evidence it is already working4). We also like the UK approach to using the revenue raised to fund child obesity and diabetes prevention (in the UK it will be used to bolster school sports facilities).  Furthermore, we note that the World Health Organization recommends taxing sugary drinks.  And here in NZ, the NZ Medical Association and the Heart Foundation recommend taxing sugary drinks.

Yes, there is a Cullen-led Tax Review underway now. But a UK style soft drinks industry levy  is something that could be got on with now, and will not tip the apple cart in light of macro-level rebalancing of our total tax system.  If the Government insists on no new taxes until after this review, then the case for SSB taxes makes a compelling case example to consider within a total tax system.

Our declarations of interest: We have received no funding from the foods and drinks industry.  TB has collaborate with Foodstuffs in a randomized trial of 1100 shoppers at Pak ‘N Save supermarkets, but this was fully funded by the New Zealand Health Research Council. All authors of this block have received HRC, MBIE, and other contestable research funding in the past.  TB has collaborated with NZIER researchers in the past, in a project estimate food price elasticities – fully funded by the HRC.

One thought on “And now the Brits are doing it: A sugary drink tax levy on the industry”