We have eight more years to go until 2025 – the year of the NZ Government’s Smokefree goal. NZ is not on track to achieve this goal, especially not for Māori. In this blog we discuss the findings of our just published study in Tobacco Control, where we have estimated the future impacts of a range of proposed novel and substantive strategies that may accelerate the reduction in smoking prevalence (ie, ‘tobacco endgame strategies’). We find that some endgame strategies could achieve NZ’s Smokefree goal, deliver large health gains and cost-savings, and could largely reduce the ethnic gap in tobacco-related health inequalities.

In 2011, prompted by the Māori Affairs Select Committee, the NZ Government announced a goal of achieving minimal levels of smoking and tobacco availability by 2025 (1). There has been some recent progress, such as an extension of the yearly tobacco tax increases until 2020, the adoption of a law requiring standardised tobacco packaging, and the announcement that nicotine-containing electronic cigarettes will be legalised at some point next year. But there is still no detailed government strategy in place of how the 2025 goal is to be achieved. The development of such a plan is critical with 2025 approaching, and research suggesting that even with yearly tobacco tax increases until 2020, daily smoking rates among Māori may still be as high as 17% by 2025 (2, 3).

It is likely that achieving the Smokefree 2025 goal will require ‘bold and new’ measures to accelerate the reduction in smoking prevalence. These measures are often defined as ‘tobacco endgame strategies’ (4). Examples of such strategies include restricting the tobacco retail environment, reducing the level of nicotine in tobacco, prohibiting the sales of tobacco to future generations (the ‘tobacco-free generation’), and gradually reducing the commercial sales of tobacco (see (4) for an overview of proposed tobacco endgame strategies to date).

A number of jurisdictions are exploring the implementation of tobacco endgame strategies (eg, Tasmania is exploring the tobacco-free generation strategy (5) and Hungary substantially reduced outlet points of tobacco in 2013 (6)). Yet, there is very limited evidence on the impact of endgame strategies on future smoking prevalence, population health and health system costs (and the timing thereof). Such information is important as it could guide decision-making and the establishment of a roadmap for reaching the Smokefree goal.

We have quantified the impacts of the following tobacco endgame strategies in our just published study in Tobacco Control:

In this research we used computer simulation models. First, we used a dynamic forecasting model which projects future smoking prevalence by sex, age and ethnicity. Second, we used a multi-state life-table model which estimates quality-adjusted life-years (QALYs) and health system costs over the remainder of the lives of the NZ population alive in 2011 under projected trends in smoking prevalence. For each of the endgame interventions future projected trends in smoking prevalence were adapted. More published details about both these models can be found here (7-11).

We found that all modelled tobacco endgame strategies accelerated progress towards the Smokefree 2025 goal, and reduced the absolute ethnic gap in smoking prevalence between Māori and non-Māori (see Figure 1). All endgame strategies also resulted in substantive population health gains and cost-savings for NZ’s health system (see Table 2), particularly so for Māori (with all endgame strategies resulting it at least three times higher QALY gains per capita for Māori compared to non-Māori).

Figure 1: Projections of adult daily tobacco smoking prevalence for Māori [a] and non-Māori [b] under business-as-usual and five tobacco endgame strategies 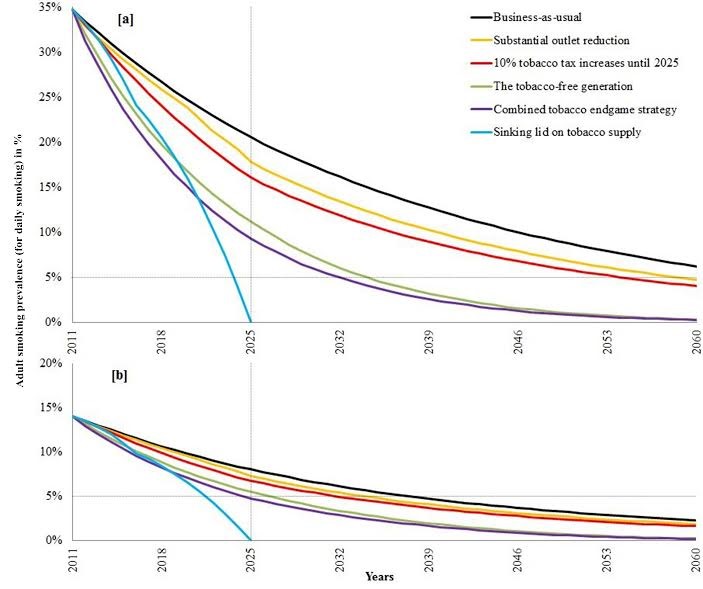 Table 2: Projected health gains (in QALYs) and health system cost-savings under selected tobacco endgame strategies by ethnicity at 3% discounting (ranging from least to most effective)

The sinking lid on supply strategy – which would end commercial sales of tobacco by 2025, but would still permit the use of alternative nicotine products and grow-your-own tobacco – was the only strategy that achieved the Smokefree 2025 goal for both Māori and non-Māori. The strategy also resulted in substantive health gains (282,000 QALYs) and cost-savings (NZ$ 5.4 billion) to the health sector over the remainder of the lives of the NZ population alive in 2011, with the majority of these benefits being accrued in the three decades after implementation (see Figure 2). While such an intervention may seem very bold, international surveys actually report high levels of public support for a ban on sales of tobacco among the general public, as well as among smokers (12-16). In NZ, particularly high levels of support were observed among Māori, Pacific, and more deprived smokers for such a measure provided effective nicotine substitutes were available (16). The legal availability of nicotine-containing e-cigarettes, which is on the cards for NZ for next year, could offer a potential alternative nicotine source for smokers. 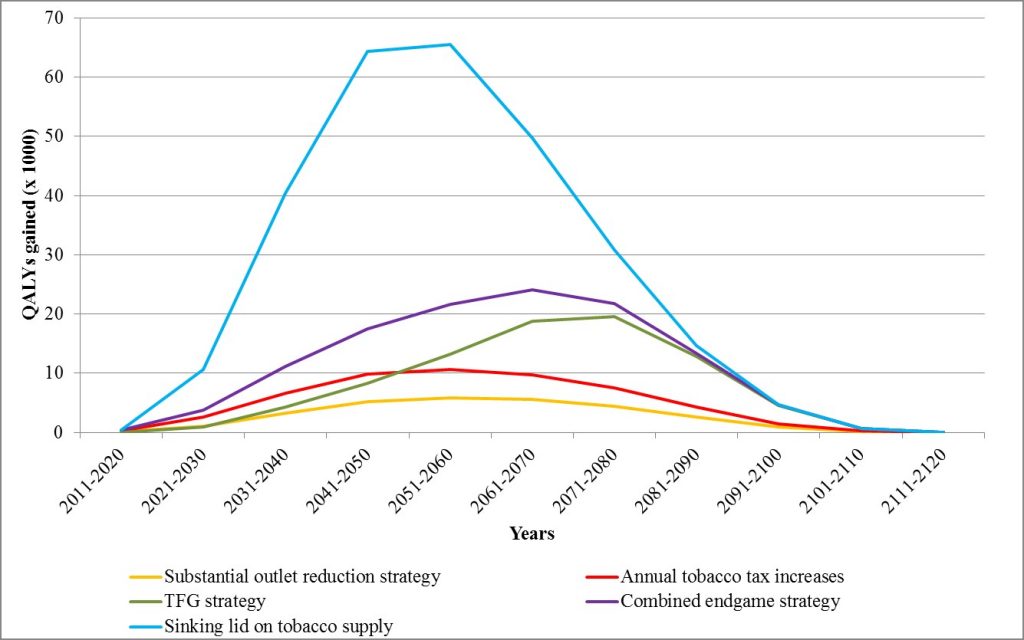 Another endgame strategy that would substantially accelerate progress towards the Smokefree 2025 goal is the tobacco-free generation strategy. No longer selling and supplying tobacco to future generations could halve smoking prevalence for both Māori and non-Māori within 10 to 15 years after implementation. This strategy was projected to result in substantive health gain (83,200 QALYs) and cost-savings to the health sector (NZ$ 1.9 billion), particularly for Māori. This can be partly explained by the elevated smoking rates among young Māori compared to young non-Māori, and so prevention of smoking uptake could play a key role in accelerating progress towards the Smokefree 2025 goal for Māori. While the health gain and cost-savings may be delayed further in to the future (due to this being accrued among our youngest population members), such a measure would ensure we do not lose the lives of another generation to tobacco. After all, it is a government’s responsibility to protect future generations from health-related harms to assure equal opportunities later in life. Levels of support for the tobacco-free generation strategy are high among current smokers (72%), as well as among young people (12-17 year olds; 68%) (17). Ultimately such a measure should be combined with measures that simultaneously increase cessation rates among existing adult smokers (for example the combined endgame strategy).

We have only eight more years to go until 2025. Endgame strategies could substantially accelerate progress towards the Smokefree goal and reduce tobacco-related ethnic disparities in health. So, lets hit ‘go’ on the ‘endgame’, and carefully evaluate the initial roll out so as to fine-tune.