Work we just published shows some adverse trends in cancer deaths by ethnic group, as well as some favourable trends. In this blog we discuss some of the key findings of this research and what the options are for NZ society to address the harmful trends for obesity-related cancers, tobacco-related cancers and infection-related cancers. 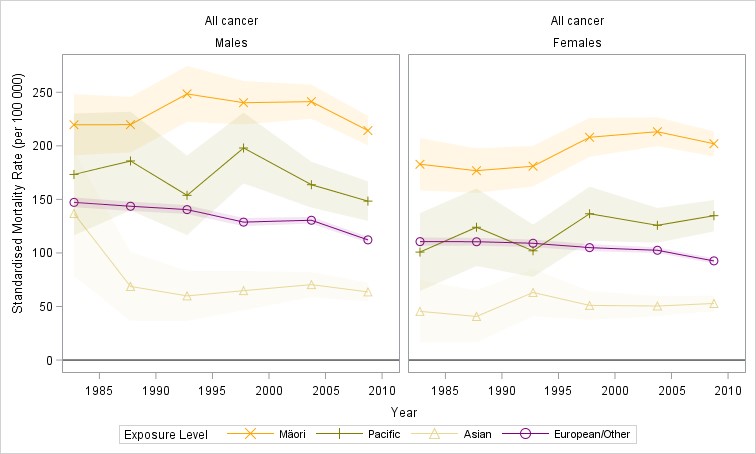 However, the trends in these inequalities varied by cancer type.

The most striking aspect of this new research is the major increases in inequalities for the obesity-related cancers. This is clearly evident in Māori and Pacific women in Fig 2, which shows increasing contribution to inequalities in cancer incidence from breast cancer and endometrial cancer over time. These results are a sentinel warning about the future of ethnic inequalities in cancer deaths. Not only are rates of obesity high in New Zealand they are increasingly socially patterned (Fig 3). The obesogenic environment in New Zealand urgently needs to be addressed so that all New Zealanders benefit but that Māori and Pacific peoples particularly benefit. This requires widespread policy changes, including physical activity options (for walking and cycling), providing healthy school lunches, constraining junk food marketing and limiting junk food outlets – particularly in deprived areas. 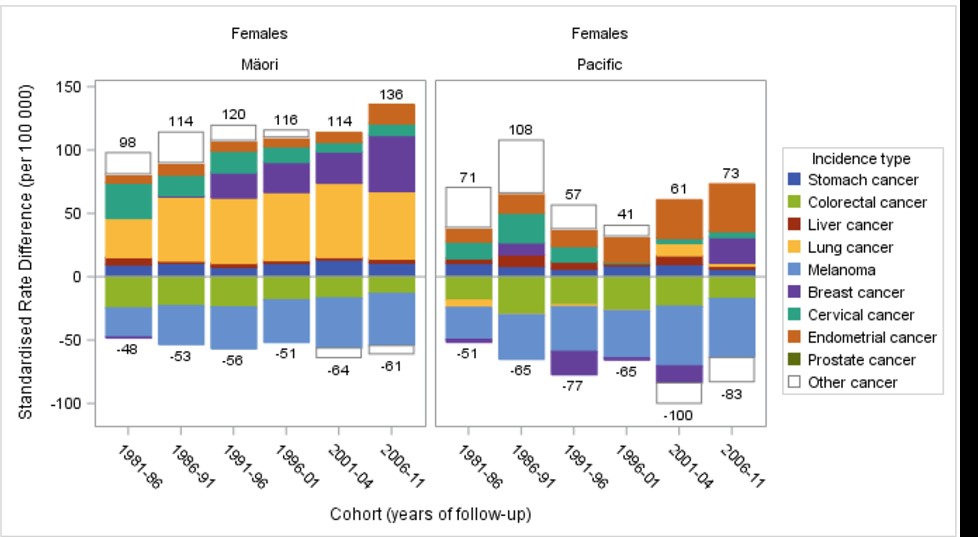 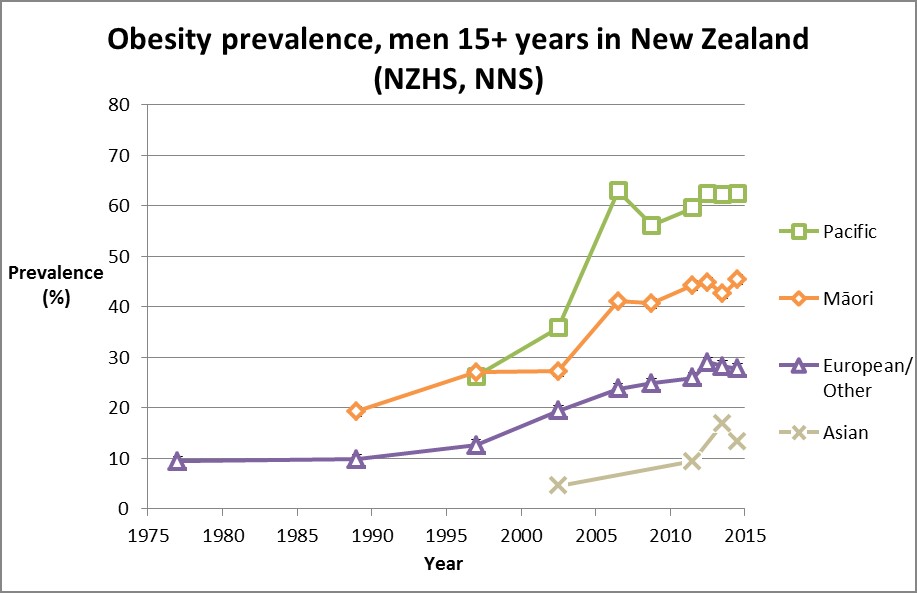 Fig. 3 Ethnic inequalities in obesity – a mediator of the excess cancer burden. New Zealand Census Mortality Study and Cancer Trends. Note: The crude obesity prevalence rates from National Nutrition Surveys (NNS) and New Zealand Health Surveys (NZHS) use an obesity definition of a BMI of ≥30, except for Māori and Pacific peoples before 2000 when it was ≥32. The age group was 15+ year olds except for in 1977 (20–64 years) and 1989 (15–74 years). European/Other obesity figures in 1977 and 1989 are estimated from the total population. (From Teng, A. M., et al. (2016))

This study reiterates that tobacco is the major single contributor to ethnic inequalities in cancer in New Zealand. Lung cancer remained the major contributor to absolute inequalities in Māori (50% and 44% of excess cancer deaths in men and women). Lung cancer inequalities appeared to have peaked, however they still account for 50 additional deaths per 100,000 Māori men and women every year. These findings are driven by the phasing of the tobacco epidemic and trends in smoking from approximately 30 years ago. Of concern for future inequalities, is that smoking prevalence remains twice as common among Māori men and three times as common in Māori women as European/Other. Māori smoking prevalence must be addressed for future inequality improvements and to maximise the probability of reaching the Government’s 2025 Smokefree Goal. Dramatic reductions in smoking prevalence, and reductions in the absolute gap in rates between Māori and non-Māori, would translate into sizable reductions in cancer mortality inequalities (on an absolute scale at least). Tobacco eradication is thus a high priority – whilst also addressing the developing obesity epidemic.

Infection-related cancers make a significant contribution to excess deaths in Māori and Pacific peoples. Stomach cancer was the third most important contributor only after lung and breast cancer mortality, and accounted for some of the highest relative inequalities between Māori/Pacific and European/Other. A vast number of stomach cancer cases (89% of non-cardia stomach cancer (2)) are the result of chronic H. pylori infection. H. pylori is directly related to childhood poverty and household crowding (3). The infection is usually acquired in childhood and Māori and Pacific have 1.9 and 3.4 times greater prevalence of H. pylori infection (and even greater relative differences in younger cohorts) (4). Stomach cancer inequalities can be addressed. Trials of testing and treating H. pylori infection in asymptomatic individuals (not done in NZ) show a 33% reduction in stomach cancer. A national approach such as a population screening programme is likely to be cost-effective (5) and may be worthwhile for addressing high and disparate rates of H. pylori infection in the adult population. A comprehensive approach would also prevent the acquisition of H. pylori in the first instance by addressing household crowding and improving living conditions for children.

Ethnic inequalities in cancer are preventable and trends in these inequalities are largely driven by the social determinants of health, flowing through to risk factors such as tobacco, obesity and infections. In this blog we have focused on just three of the largest modifiable risk factor mediators of ethnic inequalities in health. If NZ policy-makers are concerned about reducing the impact of cancer and health inequalities then they will need to take stronger measures to address disparities in obesity, tobacco use and H. pylori infection. A robust and resilient approach must also address the underlying social determinants such as child poverty, racism and culturally inappropriate services, housing affordability and income disparities.

This entry was posted in Uncategorized and tagged cancer inequalities, Maori, Pacific, preventable cancer by Kate Sloane. Bookmark the permalink.

3 thoughts on “Why are some preventable cancer deaths in Māori and Pacific peoples increasing?”