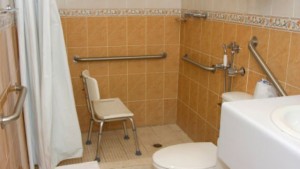 A just published modelling study by the BODE3 Team has reported that “home safety assessment and modification” (e.g., adding hand rails and removing tripping hazards in homes) appears to be a very cost-effective health sector intervention. But even more cost-effective was targeting this intervention to older people with previous injurious falls. In this blog we take a closer look at this intervention and consider what policy-makers, NGOs and citizens might wish to consider doing in response to the evidence.

What is this home modification intervention?

Home safety assessment and modification (HSAM) is a well-established intervention to reduce injurious falls among community-dwelling older people (3). It usually involves a two-stage intervention consisting of a personalised assessment of injury hazards in the home (e.g., by an occupational therapist), followed by hazard removal (4). This usually includes reducing tripping hazards (loose mats), adding grab bars inside and outside the tub or shower and next to the toilet, adding hand rails on both sides of stairways, and improving home lighting (4). A recent Cochrane systematic review of HSAM interventions concluded that they reduced the rate of falls by 19% (5). Given this evidence base, HSAM is recommended by the World Health Organization for preventing injurious falls (6).

What the new BODE3 Study found

The study used a Markov macro-simulation model that estimated quality-adjusted life-years (QALYs) gained in the 65+ age-group (7). It used a health system perspective and a discount rate of 3% (for both health gain and costs). Intervention effectiveness estimates came from the Cochrane systematic review and NZ-specific intervention costs (8).

The study estimated that in the 65+ age-group, a nationwide HSAM programme would generate 34,000 QALYs over the life-time of the modelled population (95% uncertainty interval [UI]: 5,000 to 65,000). The total cost to implement the programme was estimated to be NZ$145 million (95%UI: $96 to $206 m). The net health system costs (intervention costs plus health sector costs throughout the remaining lives of the modelled cohort) was estimated to be NZ$110 m (95%UI: cost saving to NZ$196 million).

The incremental cost-effectiveness ratio (ICER) was NZ$9,000 per QALY gained (95%UI: cost saving to $20,000). This suggests that such a HSAM programme would be highly cost-effective and very good value-for-money (i.e., way below the GDP per capita level of NZ$45,000 that we typically use as a rough threshold in our modelling work, and recommended by WHO as a rough guide). But targeting HSAM only to people aged 65+ with previous injurious falls was estimated to be even more cost-effective at only NZ$2000 per QALY gained – which is exceptionally good value-for-money. Such targeting would also lower upfront implementation costs for government or DHBs. (Conversely, this means that providing HSAM to 65+ year olds with no previous injurious falls will be less cost-effective than the NZ$9000 per QALY ‘average’, namely about NZ$19,400 per QALY gained.)

Also cost-effective, but somewhat less so than the baseline intervention, was targeting the HSAM programme to just older people aged 75+ years at $17,000 per QALY gained (or $8,300 for those with a previous fall history). Such targeted programmes would also have the advantage of lowering upfront costs to funders – which might improve acceptability for the fiscally-constrained health sector. This modelling study also explored equity issues and found that there was no significant difference in cost-effectiveness by sex or by indigeneity (Māori vs non-Māori).

Given these results, other NZ work (8), and also the results of international studies suggesting that HSAM is generally effective and cost-effective, policy-makers can have reasonable confidence that this is a good value-for-money intervention. Some of the options they could consider include:

We suspect that HSAM is more cost-effective than the average health sector intervention – including average new drugs funded by Pharmac (though NZ still lacks good league tables to facilitate comparisons). This might suggest that Central Government or DHBs could logically disinvest in certain other health sector interventions to fund HSAM (e.g., divest in very expensive pharmaceuticals used in those with very limited life expectancy).

Other alternatives for a government that did not wish to mobilise substantive resources for a nationwide HSAM programme intervention could be:

All the above options would help reduce falls. But rather than ad hoc approaches by individuals, NGOs and DHBs, there is potentially a strong case for a Central Government led national programme that achieved the efficiencies of economies-of-scale and widespread quality control of provision.