On Thursday the NZ Government announced it would continue it’s programme of yearly 10% tobacco tax increases for the years 2017 to 2020 inclusive. Using our peer-reviewed BODE3 forecasting model, we project that with these additional four years of tax increases smoking prevalence in 2020 will be 21.4% for Māori and to 8.9% for non-Māori – compared to a projected 22.7% and 9.3% if this taxation programme had not continued beyond January 2016. Prevalence reductions may be greater if we hit a ‘tipping point’ – our modelling necessarily uses responsiveness to tax seen in the past. Thus the further tax increases will help us get to a tobacco-free NZ by 2025, but more ‘endgame’ strategies are almost certainly also needed.

Tobacco tax is the single most effective tool used by governments to prevent tobacco smoking uptake and reduce smoking rates – while benefiting population health and generating savings on health care spending (1-3). Within the last decade in NZ, tobacco taxes were first increased (beyond the annual inflation adjustment) by 10% in 2010, followed by further yearly 10% increases until January this year. The further four rounds of tax increases will drive down tobacco smoking prevalence faster, and give the clear signal that the Government is serious about achieving large reductions in smoking prevalence. Four more years of 10% tax increases will see the average price for a pack of cigarettes more than double in real dollars from 2010 (when the tax rises started) to 2020 ie, from around NZ$13 to around NZ$27.

Our BODE3 Programme Team have developed and published on a tobacco forecasting model (4,5). Running this model for the newly proposed programme of increasing tobacco tax by 10% each year until 2020 will see tobacco smoking prevalence reduce to 21.4% for Māori and to 8.9% for non-Māori by 2020 (compared to 22.7% and 9.3% if this taxation programme had not continued beyond January 2016 – see Figure 1). Assuming a continuation of ‘business-as-usual’ patterns in smoking uptake and cessation thereafter, the model suggests that prevalence will further reduce to 17.3% and 7.2% by 2025 for Māori and non-Māori respectively. Furthermore, the additional four rounds of tax increases have the potential to reduce the absolute ethnic gap in smoking prevalence observed in this country by nearly 1 percentage point in 2020 (ie, from 13.4% to 12.5%). In reality however, we suspect that annual tax increases are now so well accepted by NZ politicians and the public that this programme would actually be extended beyond 2020 when this year is reached. 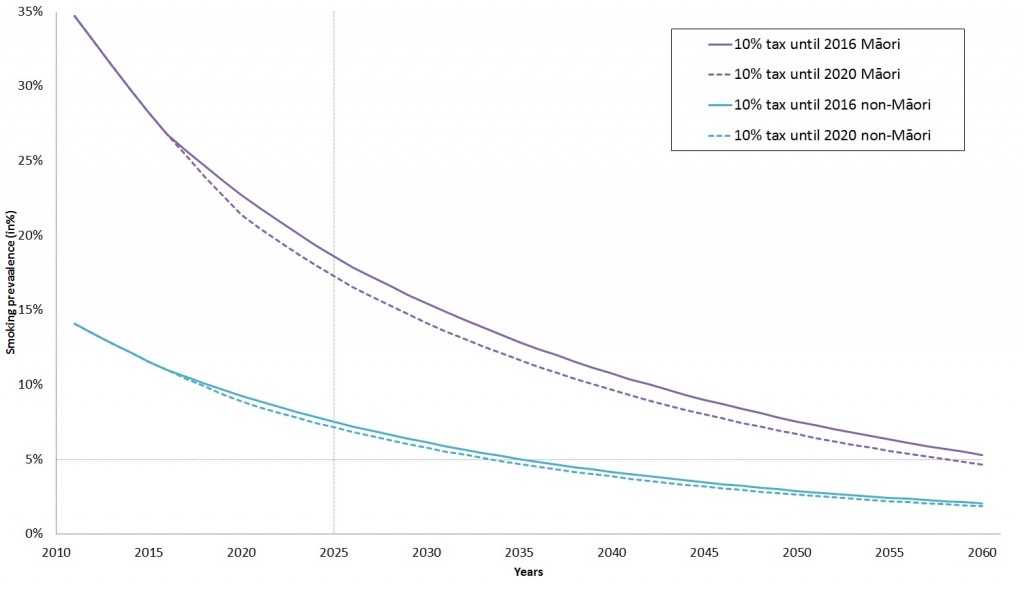 Figure 1: Daily adult smoking prevalence in 2020 and 2025 by ethnicity under annual 10% tobacco tax increases from 2017 to 2020 (compared to a status quo wherein the taxation had not continued after January 2016)

The news that NZ will at least continue its tobacco tax policy until January 2020 makes this country one of the world’s leaders in using this particular measure as a tobacco endgame strategy. Nevertheless, Australia has also been employing a strong tobacco taxation policy since 2010 as well, with a very large tax increase of 25% in the first year, followed by 12.5% increases in the years thereafter. And, recently the Australia Government announced that it will continue to increase tobacco tax by 12.5% per year until 2020, seeing the price of tobacco rise to nearly NZ$44 (6).

There is uncertainty around the effectiveness of tobacco tax into the future eg, tobacco price elasticities (responsiveness of prevalence to price) may vary into the future with tobacco reaching a very high price, or changes in the market share of nicotine-containing electronic cigarettes. Put another way, there may be a tipping point coming up, where the price gets to a point where many people ‘see the writing on the wall’ and quit. This would result in larger falls in prevalence than shown in Figure 1. Conversely, some might argue that the effect of a tobacco tax will be partly muted due to a growing illicit market – though in our past modelling such assumed growth in the illicit market had little impact on overall population-wide prevalence of tobacco smoking (2).

While the additional rounds of yearly tax increases are without a doubt a solid step forward towards achieving the NZ Government’s Smokefree 2025 goal, they are clearly not sufficient on their own (see also this previous study (2)). The likely need for further intensification of existing measures or potentially adding in completely novel measures remains (eg, such as a tobacco-free generation strategy (7), or a substantive reduction in the number of outlets selling tobacco (8,9)). So does expansion of the more incremental strategies such as passing the proposed law on plain packaging, expansion of smokefree areas (including a law for smokefree cars), and more mass media campaigns: especially those for a Māori and Pacific audience.

This entry was posted in Uncategorized and tagged modelling, smoking prevalence, tobacco tax by Nick Wilson. Bookmark the permalink.