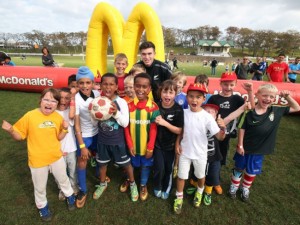 This blog looks at five important ways that the Children’s Code for Advertising Food could be substantially improved to protect children and young people from obesity and poor oral health. Although public health experts would generally favour a regulatory approach (given the lack of evidence for an industry-controlled process and voluntary codes (1)), the current review of the voluntary Advertising Codes in NZ does present another opportunity for the food industry to show they do want to be part of the solution to reduce New Zealand’s unacceptably high rates of obesity in children and young people (2).

Kiwis want tougher restrictions on junk food marketing to children. A Horizon Research poll conducted last year found 41% of Kiwi’s were strongly in favour of greater restrictions to reduce the advertising of unhealthy foods and drinks to children, and 32% “somewhat” in favour. About 6000 “ActionStation” members called on the NZ Government to put enforceable restrictions in place on junk food marketing to children. In addition, there is strong international support to reduce exposure of children to unhealthy food marketing, for example as expressed in the final report of the World Health Organization Commission on Ending Childhood Obesity (3), chaired by NZ’s Professor Sir Peter Gluckman, the Chief Science Advisor to the Prime Minister. But the Government refused to put any restrictions in place…..They decided to leave it up to the food industry…..again.

Advertising potentially harmful products, such as unhealthy foods, to children is unethical, since children cannot properly understand or interpret advertising messages and are heavily persuaded by them. Given the vulnerability of children to junk food advertising and its potential harmful impacts (4, 5), it may arguably be regarded as a form of exploitation (6). Under the UN Convention of the Rights of the Child, countries, including New Zealand, have a responsibility to protect children from all forms of exploitation.

At the very least, although it wasn’t widely publicised, Kiwis were given the opportunity to put in submissions to the review of the Code for Advertising to Children and the Children’s Code for Advertising Food. Submissions just recently closed. It is important to note that there is no evidence internationally of any impact of self-regulatory codes on exposure and power of marketing (1). So, can New Zealand make it work against the odds? And if so how?

The following five revisions are probably necessary for the revised Codes to have any potential impact on restricting junk food marketing to kids.

1. The purpose of the Children’s Code for Advertising Food needs to change and be made explicit – The current aim of the Code is to ensure that each individual advertisement is legal, decent, truthful, and not overtly damaging to children. The Code does not enforce any specific restrictions on the actual volume of advertising and the placement of advertisements, and thus fails to protect children as a group from the large volume of sophisticated marketing engaging with them through multiple media platforms (7). The explicit purpose of the Code should be to minimise or eliminate exposure of children to the marketing of unhealthy foods across all media.

2. The Code needs to be supported by an accepted nutrient profiling model – Foods high in energy, saturated fats, trans-fatty acids, free sugars or salt should not be marketed to children. An accepted nutrient profiling tool is therefore critical to classify foods as suitable/unsuitable for marketing to children and to implement those restrictions. The most appropriate model is the World Health Organization’s (WHO) Nutrient Profiling Tool, since it is specifically designed for the purpose of restricting the marketing of unhealthy foods to children and certain food categories are not permitted to be marketed to children under any circumstances. The latter include chocolate and confectionery, cakes and sweet biscuits, juices and energy drinks. Conversely, unprocessed meat and fish and fresh/frozen fruit and vegetables can be marketed without restrictions. Maximum nutrient level cut points are applied to determine the eligibility of foods in all other categories to be marketed to children. The Health Star Ratings or the Fuelled4Life food classification system could be considered too. However, the Health Star Ratings are only applicable to packaged foods and a cut point has not yet been widely agreed to dichotomise foods as healthy/unhealthy.

Many foods classified as “sometimes” foods under Fuelled4Life are unacceptably high in saturated fats, free sugars or salt which means only “everyday” foods should be permitted to be marketed to children.

4. Sponsorship should be included under the restrictions – Food companies state that the aim of their sponsorship, fundraising and community outreach initiatives is to give back to their communities. But the branding of these initiatives also builds brand loyalty and so has marketing benefits. Therefore the code should restrict any branded sponsorship directed to children (as defined by the Quebec definition) on any media platform. No branded sponsorship/community outreach should be allowed in the following settings: schools, early childhood education centres, children’s sports teams, clubs or groups, sporting events for children or the whole family, school events, and all other community and cultural initiatives involving children. Real-world examples of current industry sponsorship/ community outreach in NZ that would only be permitted without branding under these proposed new guidelines include:

– Coca Cola: contributes funding to youth development programmes and awards  & developed the Move60 programme to encourage teens to be active

5. Impact of the code should be comprehensively and regularly monitored – The NZ Government should fund independent monitoring, research and evaluation (on exposure and power of marketing to children). Monitoring should include public reporting and opportunities to acknowledge companies that are doing well.

In summary, there are many important ways that the Advertising Codes could be substantially improved and strengthened. Although public health experts would generally favour a regulatory approach (given the lack of evidence for an industry-controlled process and voluntary codes), there are times in history where the food industry can sometimes contribute to protecting public health (especially if it fears regulation or a consumer backlash). Nevertheless, the current review of the voluntary Codes in New Zealand does present another opportunity for the food industry to show they do want to be part of the solution for reducing New Zealand’s unacceptably high rates of obesity and poor oral health in children and young people.

This entry was posted in Uncategorized and tagged advertising, childhood obesity, childrens health, marketing by Kate Sloane. Bookmark the permalink.