It’s easy to get dispirited in the world of tobacco control in Aotearoa/New Zealand. Five years on, the euphoria of being the first country in the world where the Government set a credible goal of being a smokefree nation is wearing off. The Government seems to find it hard to talk about the Smokefree 2025 goal (1), to the extent that it is not even discussed in the draft national Health Strategy (2). As a world-leading goal addressing New Zealand’s biggest preventable risk factor for ill health and premature death, you might think it would be worth a mention.

The implementation of population-level policies at national level appears to have stalled. There is no articulated commitment to further tobacco tax increases (the single most effective measure) after the last scheduled increase in January 2016. The implementation of plain packs legislation is nowhere to be seen – as other countries like UK, Ireland and France just get on with it. Mass media (another well-proven intervention) has remained underfunded and underused (3), with activity recently further curtailed with the changeover of the Quitline from the Quit Group to Homecare Medical. Current ‘realignment’ activity appears unlikely to be sufficiently effective (4). Unsurprisingly, projections show that on current trends the smokefree 2025 goal will not be met, and will be missed substantially for Māori (5).

However, there is a way to ward off the pessimism that this somewhat gloomy national picture could create. The antidote is to look around at what is happening at the local level, where there are numerous exemplars of dynamism, innovation and commitment to achieving the Smokefree 2025 goal. These local developments have been happening since 2005, and were until recently largely for smokefree greenspaces (playgrounds, parks) and sometimes for council events. Since 2013 there has been some particular bursts of planning and policy activity. These activities have included medium-term plans by councils, and innovative approaches for new types of smokefree outdoor areas.

The positivity at local level was reflected in the adoption of a remit at the 2015 Local Government New Zealand conference to ask central government to develop and implement ‘legislation to prohibit smoking outside cafés, restaurants and bars’ (6). So, with apologies to those who are not mentioned due to constraints on space, what follows are some beacons of hope from around New Zealand.

Northland is a model for ‘across-government’ smokefree action, going beyond the health sector. The Northland Intersectoral Forum (NIF) comprising of local and central government agencies have signed a Smokefree 2025 Statement of Intent. Under this Statement of Intent, NIF agencies will support the Smokefree vision, develop and implement individual agency plans identifying specific actions within the relevant organisations to progress the Smokefree 2025 agenda, work collaboratively with the Northland DHB Smokefree team to develop these plans as required, and support the Smokefree 2025 initiatives of other NIF partners (7).

To reward the progress by businesses, awards have been made by Northland DHB and the Cancer Society to 17 tobacco free retailers, who have chosen to no longer sell tobacco, and 10 cafés with smokefree outdoor dining.

The city smokefree policies will be extended from green spaces to ‘principal entrances and exits of Council buildings and facilities, and …Council bus passenger shelters’ with effect from 1 January 2016 (8). In the city rebuild, the new ‘Bus Exchange’ area was made smokefree and this month it was confirmed that the whole new ‘Health Precinct’ area will be smokefree.

Since 2014 the Council has also had a smokefree social housing policy which designates all new or refurbished units as smokefree. Any new tenancy agreements issued require tenants not to smoke indoors. A partnership with Community and Public Health provides smoking cessation support for tenants where required.

Ashburton now boasts three cafés who have adopted smokefree outdoor dining. With a further café about to become smokefree, the prospect of seeing a town that has all its 10 café venues totally smokefree is possible.

In 2013, Auckland Council adopted one of the most comprehensive and long-term smokefree outdoors plan so far in New Zealand (9). This included:

Auckland Council planning is also special in aiming to have a smoking prevalence for South Auckland of under 3% by 2025.

The review of the Smokefree Policy was brought forward to 2015 and will look at whether a bylaw is needed and if the 2018 timeframe is still appropriate. The review is due to be completed by June 2016.

Palmerston City Council is further along than most in adopting smokefree policies since 2013 for some centre city streets, and for the seating on those streets. The initial 2013 policy also included bus stops, council events and the outdoor spaces at Council-owned venues. The policy was reviewed in 2015 (10). The Council used the innovative approach of changing their Signs and use of Public Places bylaw to require businesses using sidewalk seating to have smokefree signs and to not provide ashtrays. They also have included smokefree criteria as part of contract conditions for anyone accessing Council funds for events. $10,000 has been set aside each year to support the project.

The Council also led a successful remit at the Local Government New Zealand conference AGM in July 2015, calling on central government to pass legislation for smokefree outdoor dining. Ten retailers have gone tobacco-free in the MidCentral Region, with 5 in Palmerston North. 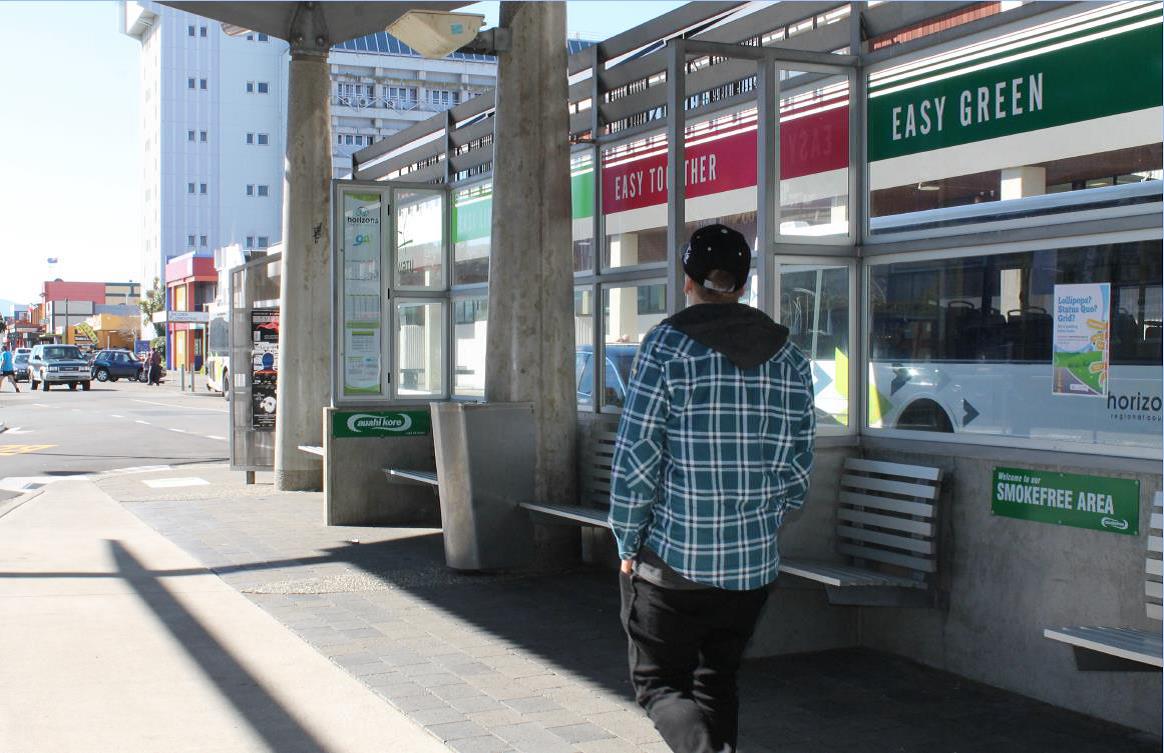 The Horowhenua District Council adopted an innovative Smoke Free Environments policy in June 2015. It includes, amongst other things:

In 2014, the Whanganui District Council adopted a smokefree policy for the ‘central commercial zone’ including the main street and Majestic Square; the riverfront zone, including the ‘River Traders’ and Farmers Market; and the Arts and Commerce Zone (some streets back from the river) (12). This total smokefree area is the largest proportion of the downtown of any New Zealand city that we know of. The policy process was unusual, in that the business organisation Mainstreet Whanganui was a major partner with health groups in driving the adoption.

Napier City and Hastings District Councils have just adopted (late 2015, with effect in July 2016) a joint smokefree policy, which includes 10 metres around entrances to Council-owned buildings, and bus stops. The smokefree City Square and Central Plaza in Hastings will be smokefree, as will be footpath areas set up primarily for café and dining purposes. The Hawke’s Bay Tobacco Free Retailers project began in mid-2015, and to date at least two retailers are tobacco free. The iwi Ngati Kahungunu is a leader in holding smokefree and tobacco free events (e.g. 13).

The above examples and future activity around New Zealand is being helped by the investment of time, people and resources from NGOs (e.g., Cancer Society, Heart Foundation), DHBs and local authorities. In particular, large surveys of public and/or business attitudes to smokefree outdoor policies have been commissioned in Auckland, Hawke’s Bay, Wellington and Christchurch (e.g.14,15).

These surveys suggest public support of over 80% for smokefree entrances to buildings that the public use, over 70% for transport waiting areas, and 65-80% for outdoor eating. A feature of these surveys is the low public awareness of the smokefree outdoor policies that they found, confirming that sufficient investment in the communication of the policies is essential. Local authorities vary widely in this investment, and in the quality and number of the smokefree signs they use. Because of the lack of standardised (or any) research across New Zealand, we have relatively little idea of how much smoking there is in designated ‘smokefree’ areas.

It seems ideal to start to discuss what the year 2025 goals for local authorities and local smokefree coalitions could be. What might achieving the smokefree goal mean for a city, town or locality? It could be overall smoking prevalence of less than 5%, or perhaps prevalence of below 5% for all the main ethnic groups. It could also be defined in relation to the comprehensiveness of tobacco control action – perhaps the degree to which smokefree policies (e.g. smokefree outdoor public places including outdoor dining, parks, playgrounds, shopping malls, CBD areas etc) and other local actions have been effectively implemented?

Ideas are welcome and please comment below in response to this blog. But to set a high standard, we suggest a smokefree place could be defined as one where smoking prevalence is less than 5% in all population groups, and there is little chance of children seeing smoking in public. Specifically, the chance of a child seeing smoking in defined public places (playgrounds, parks, etc) of the least advantaged census area of a city or district should be less than once a month.

Once a definition is widely agreed upon, we suggest that there should be a (healthy) competition to see which locality (city, town, district) can be the first to achieve this smokefree status. The prize should be the honour of being the first, inspiring others, and the greatly improved health and well-being for all who live there and protection of their children from the scourge of addiction and premature death due to tobacco smoking. The idea of striving for a noble goal for the benefit of the whole population could even catch on – are any of you central government politicians listening?