This blog aims to discuss a study we recently published on NZ health system cost estimates by sex, age and proximity to death. Such work is only possible due to extraordinary richness of routine NZ data. We highlight four findings. First, costs – not surprisingly – vary markedly by age, and also are highly correlated with expected morbidity by age. Second, there is much less variability by age for costs in the last year of life – indeed, the ‘costs of dying’ peak at about 60 years of age, then fall dramatically. Put another way, we spend more on middle-age people in the last year of life – which seems appropriate. Third, there is concern about ballooning health system expenditure due to population aging – but one needs to factor in that the age at which people die will increase in the future. We probed Treasury estimates of future Vote:Health funding, and suggest their models slightly over-estimate future spending by up to 4% by not explicitly allowing for increasing average age of death.

In New Zealand health expenditure generally increases with age. To understand whether this is due to costs proximal to death or due to heavy burden of disease at older ages we used linked health datasets (HealthTracker – Ministry of Health) to determine health expenditure by proximity to death. Here we summarise a paper published in the NZ Medical Journal on these findings.

The costs included in our analysis were derived by linking national health event data for hospitalisations, inpatient procedures, outpatient events, pharmaceuticals, laboratory tests, and primary care consultations and assigning cost to each health event. Data not covered in our analysis included: lead maternity carer-provided care, rest-home and hospice care, mental health care, dental health care outside of hospitals, patient transport (eg, National Travel Assistance), care directly funded by Accident Compensation Corporation (ACC) and community physiotherapy. At the time of analysis, these data were missing or not able to be linked, and totaled to about 50% of total NZ health expenditure. For example, total costs obtained in 2009/10 financial year was $6.7 billion while total health expenditure for the same time period was $12.98 billion. The real difficulty here is to understand whether these missing costs would change the pattern observed from the HealthTracker data. For example, it is clear that missing rest-home and hospice care means that costs proximal to death will be moderately underestimated.

Health system costs vary markedly across the life course, and are skewed to the last year of life. Our study found that costs per person-year “regardless of proximity to death” varied approximately 10-fold from $535 for 10–14 year olds (sexes combined) to $5,600 for 85–89 year olds. The rapid increase in costs starts occurring from the age-group 40–44 years, when the costs increase almost 5 fold from $1,025 to $5,600. Interestingly, this pattern is consistent with the pattern in the population prevalent years lived in disability (a measure of morbidity), which, rather obviously, suggests that the health system costs increase as a results of increase in burden of disease (Fig 1).

Fig 1: Health system costs for the average NZer at different ages, along with average morbidity level 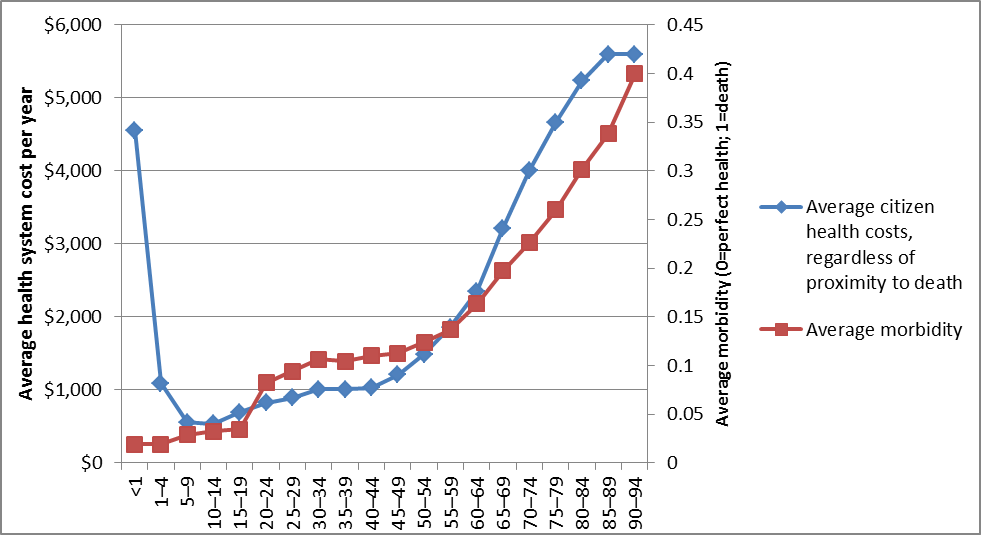 Health system costs in the last year of life by age

Fig 2: Health system costs in NZ for the last year of life at particular ages 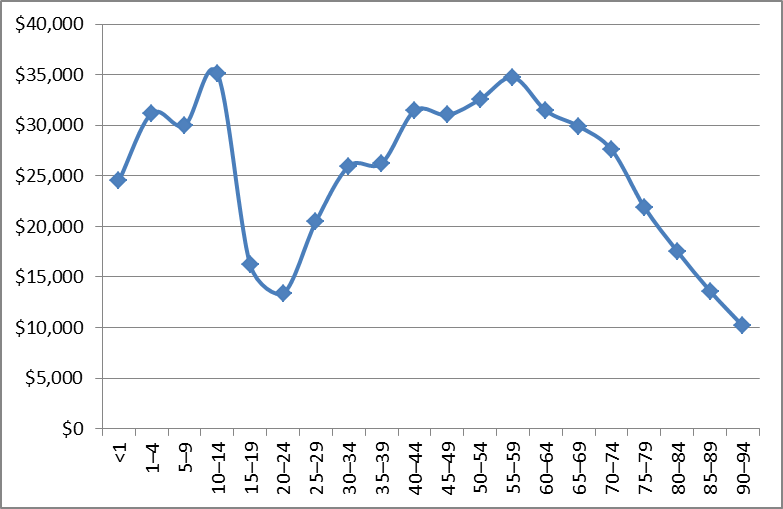 An important policy issue is how health system costs will grow in the future, due to population aging (among other drivers). Recent Treasury estimates – whilst ‘good’ in many aspects – did not allow for costs near death being ‘pushed out’ to older ages in the future as mortality rates fall. We examined what impact this would have on future projections (Table 1). We find that not allowing for near-death costs being pushed out to older ages in the future may overestimate projections by as much as 4% by 2040. This ‘bias’ is not as severe as we initially thought it might be, but it still highlights one improvement that can be made in future projection models – especially given we now have the data in NZ separately for near-death health care expenditure.

Table 1: Health system costs in the future – with and without accounting for proximity to death 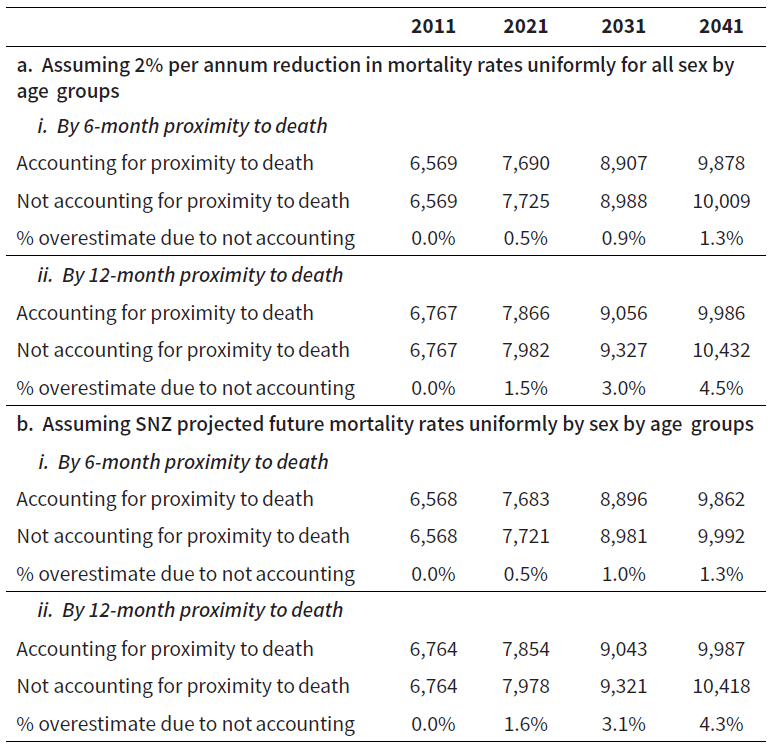 This entry was posted in Uncategorized and tagged future costs, health system costs, HealthTracker, near death costs by Kate Sloane. Bookmark the permalink.