A curious week in the world of soft drinks.

The surprising darling of public health action on soft drinks, New York, suffered a set-back when the New York state Supreme Court Appellate Division said that Bloomberg’s health board had gone too far in stopping sales of non-diet soda and other sugar-laden beverages in containers bigger 470mL. 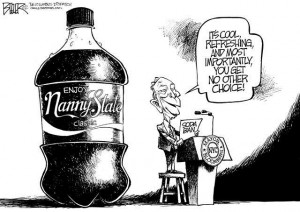 (Interestingly from a New Zealand perspective, there have been predictable caricatures of New York as a ‘nanny state’ in recent years.  This nanny state vernacular is by far most strongly used in New York and New Zealand – try a quick Google search, and you will see.)

In contrast to the ‘legal approach’ to problem solving taken in NY, back in New Zealand Coca Cola has launched a feel-good “Innovate | Information | Choices” campaign.  Coca Cola New Zealand are pledging:

The cat is among the public health pigeons!  Paul McDonald (Pro Vice Chancellor, Health, Massey University) has offered praise:  “Bravo to Coca-Cola for making a commitment to take these steps”.  Boyd Swinburn (School of Population Health, University of Auckland) has condemned it as an ounce of well-meaning in the context of the “ton of bricks dumped by Big Food and Big Soda on the real public health policies which could reduce obesity here and around the world”.

We have been looking at these issues in various modelling projects – including our own forthcoming work – and the benefits are clear.  Similar action on other food groups (e.g. saturated fat, salt) is a bit trickier – but still do-able if well studied and introduced carefully.  But getting rid of sugary drinks is a no-brainer.

So surely there are win-wins in here for both society and the industry?  The latter can shift consumption to ‘healthier alternatives’, and still make profits that make the world go round.  However, I side with Boyd Swinburn on the approach to achieving this – setting the new rules must be led by Government and civil society, not delegated to the beverage industry to lead.

One alarming issue, though, is the normalisation of sports and energy drinks.  Ever noticed the large Powerade (a Coca Cola brand) chilly bin constantly in camera shot during All Black games?  This normalisation is spilling over into kids – for example, after a 5 minute cross-country running race watch the number of kids reaching for PowerAde, a sports drink that really is only needed after 90 minutes of inten

Hence my derision at Coca Cola advertising this week suggesting there will be Powerade sponsored walking events.  Come on! You do not need a sports drink like

Powerade to go for a walk.  Maybe Coca Cola will be promoting their “Zero” Powerade product, but this seems a difficult misnomer to market to me.

Bottom line – there is now an open acknowledgement from the soft drink industry that sugary drinks are part of the obesity problem.  Good on them for eventually being upfront.  Well done.  Given this consensus, where is the leadership from Ministers of Health and other political leaders in the current Government to set the rules of the new game?

This entry was posted in Uncategorized and tagged soft drinks by TONY BLAKELY. Bookmark the permalink.

2 thoughts on “What the fizz! A week of dealing to sugary drinks in NY and NZ”