An analysis of 45 million research documents has found that the top five most prolific publishers account for more than 50% of all papers published in 2013. The digital era precipitated a massive shift from a proliferation of research publishers to an oligopoly of a small handful. This influence is particularly evident in the social sciences (where the share is more like 70%) and less so in the humanities (20%); the Natural and Medical Sciences lie around the half-way point largely because of the independence of the major scholarly socities.

The paper concludes that this massive increase in influence has been largely responsible for the massive rises in profits of these publsihers, without a concomitant increase in added value to what has been described as ‘the most profitiable obsolete technology in history.’

It also concludes that only the academic community – having sold off its intellectual capital at an amazing rate (see image at the bottom of this post) – has the ability to reverse this the ‘acaedmic spring’ of the open access / open science movements.

Read The Oligopoly of Academic Publishers in the Digital Era in full (and open access) at PLoS ONE. 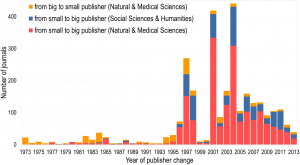 Number of journals changing from small to big publishers, and big to small publishers per year of change in the Natural and Medical Sciences and Social Sciences & Humanities | CC BY Larivière et al (2015) | doi:10.1371/journal.pone.0127502.g002

This entry was posted in Uncategorized and tagged open access, open publishing, research by Richard White. Bookmark the permalink.