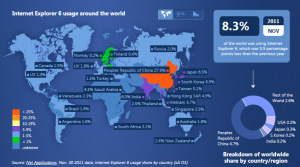 Internet Explorer version 6 (IE6) was first released with Windows XP in 2001. A decade later, around 8% of computers connecting to the internet are still using it. This is a problem because old software is a security risk, and in the case of IE6 creates an additional workload for web developers, who have to take extra steps to make sure their website works with an old browser.

However, the end is near. Some days ago Microsoft announced that starting in early 2012, they will start automatically upgrading IE6 to the most recent version supported on the computer being upgraded. The goal is to reduce IE6 usage to less than 1% globally.

If you are still using IE6, make plans to upgrade as soon as possible. Old software does not “wear out”, but it does become obsolete. And because outdated software makes it easier for an attacker to take over the computer it’s installed on, using it contributes to internet crime and malware transmission.