A Mother of a Wasp Problem … 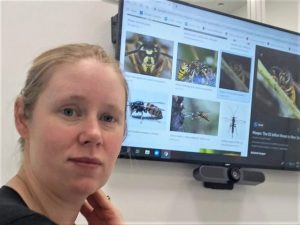 When mum-to-be Gemma McLaughlin packs up her bucket and spade, it’s not to practise sandcastle building for the baby who’s due in December. Rather, she’ll be off to dig up the nests of some of New Zealand’s most hated insects – the German or the common wasp – dressed in protective bee-suit and layers of sting-proof denim, with a fellow researcher coming along for added safety.

She’s even got a Facebook page where members of the public can contact her about nests on their property.

As to why Gemma’s so keen to collect these aggressive pests: her PhD focuses on potential genetic techniques to eradicate these non-native nuisances. Ironically, though, while her ultimate aim might be to kill off these invasive critters, much of the practical work in the lab actually involves keeping them alive. “They’re not like bees, no-one deliberately raises them,” she says.

So Gemma’s had to teach herself ‘Wasp Husbandry 101’ just to have live insects to study.

“The larvae are so demanding, so the workers are always foraging. They work so hard.”

This has given Gemma both plenty of work to do herself, raising broods of young wasps, and also “a begrudging respect” for the adults. Yet it also points to why these social insects are such a problem in New Zealand: that their incessant feeding robs many of our native species of food. Most infamous for consuming massive amounts of ‘honeydew nectar’ in beech forests (an important food for native animals), these wasps also eat substantial numbers of native insects.

“They’ve also been known to kill baby chicks and clear out the carcass,” Gemma reckons.

Helping get rid of this huge conservation threat, therefore, is one of Gemma’s main motivations. “I want to make a difference – I want to say I’m doing worthwhile science,” she says. “Our country is so unique.”

It’s what led Gemma into genetics in the first place, and to completing a Masters’ degree on the DNA of the Tasman booby, a remote island seabird.

“They were thought to be extinct and I was looking at whether the [recently-rediscovered] island populations were in need of genetic rescue.”

An OE in Europe then followed, including a job as a lab technician with a schizophrenia research group at King’s College, London. “I loved working there, it was really multinational,” Gemma recalls.

Re-motivated by the experience, she returned to New Zealand determined to undertake an applied genetics project “on invasive species management”. Wasps seemed an ideal candidate, with the idea of targeting these particular insects for genetic control (say, by turning off genes) a novel area of research.

“It feels strange, like I’m the first person doing this in the world,” Gemma says.

Of course, while actually applying genetic technology to pest control is still “years away”, Gemma’s already making a difference every time she turns up to dig up a wasp nest.

“I get to interact with the public a lot more than I would otherwise and get a better picture on their feelings towards genetic research.”