Who made a home for the “magical new technology” of cinema in Dunedin? Look no further than Henry Charles Gore.

Long before New Zealand’s latest boom of big-ticket features there is a little known history of local film-making that stretches back to the early twentieth century. Dunedin cinema enthusiasts were extensively involved in fostering this culture which, fuelled by the marvellous nature of the medium, flourished here. 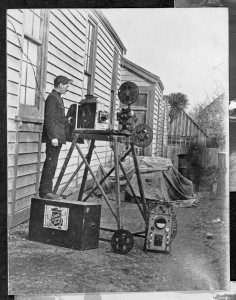 Another of Dunedin’s cinematic pioneers, Major Joseph Perry of the Salvation Army. Perry was posted to Melbourne at the age of 19 where he joined the Limelight Department- dedicated to spreading the word of the Lord through the technological wonders of the new visual medium. In 1898 led the Limelight New Zealand tour, returning to Dunedin with fourteen one-minute short films and an orchestra in tow. “Member of the Salvation Army, possibly Joseph Perry, by a film projector.” Ref 1/2-125505-F. Alexander Turnbull Library, Wellington, New Zealand. URL: http:// natlib.govt.nz/records/22899176.

The general emergence of cinema as a global form of mass entertainment was related to widespread social transformations that occurred at the end of the nineteenth century. The “movie” found its home in the habits of a faster paced city life, being cheaper, shorter and more spectacular than say, magic lantern shows or vaudeville productions. Modernity also brought new strength to old networks of global distribution, as reflected in the astonishingly rapid arrival of moving picture technology in Dunedin; making its way from the Lumiere Brothers’ first international screening in Paris, 1895, to our southern city in the space of merely a year!

This pioneer screening was provided by Australian J. F. MacMahon’s Salon Cinematographe, the first of many travelling exhibitors to visit Dunedin in the late 1890s and early 1900s. Often with the assistance of live performers and small orchestras, these companies hired small venues, set up their projectors and enraptured crowds with the “newest electric marvel of the century”. 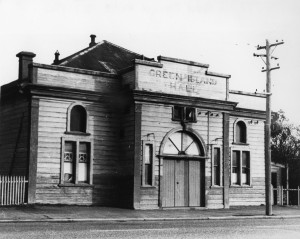 Having witnessed said marvels, fourteen year-old Henry Charles Gore was determined to get a piece of the action. Being an avid amateur photographer, Gore opened his own independent photographic studio on King Edward Street at the tender age of eighteen. The following year he had imported the necessary motion picture equipment and filmed local events himself, following the example of other New Zealand pioneers: A. H. Whitehouse of Auckland, the first to import a camera to New Zealand (1898), and travelling exhibitor T. J. West of West’s Pictures. He mastered the workings of projectors and other cinematic technology, making his own cameras and arduously translating French or German instruction manuals. He began travelling internationally in 1904, eventually landing a job as a technician and operator of Simplex Projectors in a Hollywood studio – a position that introduced him to the latest technology in cinematic projection. In doing so, he became the first New Zealander to gain overseas film-making experience. 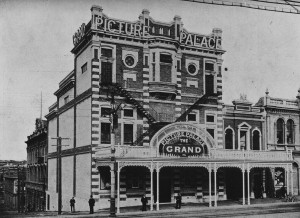 Returning to Dunedin, Gore married in 1910 and the first of his nine children was born the following year. He fuelled his love of film by documenting his family at play and on holiday; filling the front room of his St Clair home with cameras and developing equipment, which also hosted those who visited “Mr Gore” for technical advice in their own projects. When the Queen’s Theatre was opened in Auckland, 1911, Gore’s known expertise in cinematic technology landed him the role of chief projectionist. Returning to Dunedin in 1912, his extensive working knowledge and enthusiasm was instrumental bringing Dunedin its first permanent cinema halls, with the added bonus of providing Gore with a venue for his local shorts. 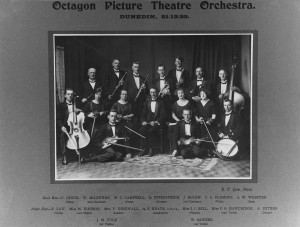 Photographed by H.C. Gore himself. Picture theatre orchestras were a cornerstone of the silent film era, providing atmosphere, emotion, and in some cases humour in any given screening. “Octagon Picture Theatre Orchestra 1923”, S15-035g, negE679/24, Hocken Collections, Uare Taoka o Hakena, University of Otago.

As his business grew alongside his family, Jack Welsh was hired as a bag boy, assistant and veritable protege. Together, Welsh and Gore dominated local film production in Dunedin before World War II – capturing newsreels of local sporting or cultural events for local theatres, scenic and industrial films for general release Welsh would later go on to produce Dunedin’s first feature-length “talkies” in the 1930s. He and other producers of film and photography that subsequently followed in Gore’s path owed much to his persistence, passion and expertise. The man himself remained a mainstay of Dunedin’s cinema scene until his death in 1967, at the age of 85. Up until then, if ever a local projector broke down, the call went out: “Send a cab for Mr Gore!”