What About Captain Cook?

After our first blog post – on the arrival of the John Wickliffe at Kōpūtai/Port Chalmers in March 1848 – one of my students asked: ‘Why didn’t you start with Captain Cook?’ It is a good question and its answer helps explain the shape of the early history of Otago. 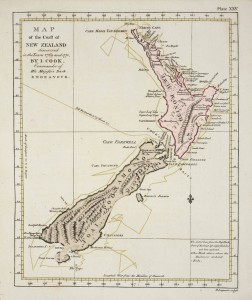 When the Endeavour under the command James Cook, then a Lieutenant, sailed south down the east coast of Te Wai Pounamu in February and March 1770 its progress was slow and frustrating. After rounding Bank’s Peninsula, Lieutenant John Gore (who was third in command) believed he saw land to the southeast. Cook was sceptical, being ‘very certain that it was only Clowds’, but Gore remained convinced and so on Saturday 17 February, Cook ordered the Endeavour to head southeast searching for what he called ‘Mr Gores imaginary land’. After a day, Cook ordered a change in course back to the west towards Te Wai Pounamu. The Endeavour’s course along the east coast was slow, initially because of strong contrary sea currents and then because it was running into the teeth of a southerly gale. Then off the Otago coast, the Endeavour became becalmed. Eventually the wind swung to the north and blew strongly as the vessel sat well off the north Otago coast in line with Moeraki. The weather did not assist Cook in developing a clear sense of the landscape:

Altho we kept at no great distance from the shore yet the weather was so hazey that we could see nothing destinct upon the land only that there were a ridge of pretty high hills parallel with and but a little way from the sea-coast.

On Sunday 25 February, the Endeavour ran down the Otago coast, passing the entrance to Otago Harbour and travelling along the exposed Pacific coast of the Otago Peninsula. Cook was struck by the large headland that juts into the Pacific Ocean on the Peninsula’s east side, which he named Cape Saunders after Sir Charles Saunders, the Commander of the British Fleet when James Cook served in 1758-9 on the St Lawrence River (in what is now north-eastern Canada).

Cook noted the landscape feature that made the greatest impression on the Endeavour officers and crew: ‘there is a remarkable Saddle hill laying near the shore 3 or 4 Leagues SW of the Cape [Saunders]’. Lieutenant Zachary Hicks also recorded the prominence of ‘a remarkable saddle hill’, as did the able seaman Francis Wilkinson, the astronomer Charles Green, and the midshipman John Bootie. While there is no firm textual evidence to suggest that Cook formally named ‘Saddle Hill’, it is clear that this would be an obvious name for future incoming Europeans. Given recent debates over the significance and future of Saddle Hill it is important to note its centrality in the Endeavour accounts of coastal Otago.

As the Endeavour progressed down the Otago coast, two important questions loomed. The first of these was the extent and nature of the native population. As they tracked south from Cape Saunders, Cook noted that

Being not far from shore all this morning we had an opportunity of viewing the land pretty distinctly: it is of moderate height, full of hills which appear’d green and woody, but we saw not the least sign of Inhabitants.

Earlier, when the Endeavour was stalled off the north Otago coast, Joseph Banks reflected: ‘As we have now been 4 days upon nearly the same part of the coast without seing any signs of inhabitants I think there is no doubt that this part at least is without inhabitants.’ But further south, off the Catlins coast, Banks revised that opinion, as on 4 March

In the evening [the Endeavour] ran along shore but kept so far of that little could be seen; a large smoak was however, which at night shewd itself in an immence fire on the side of a hill which we supposd to be set on fire by the natives; for tho this is the only sign of people we have seen yet I think it must be an indisputable proof that there are inhabitants, tho probably very thinly scatterd over the face of this very large countrey.

Of course, had the Endeavour found the entry to Otago Harbour and perhaps explored the contours of the coast to the north closely and carefully in more favourable weather conditions, they would have seen and encountered Kāi Tahu Whānui settlements: the land was inhabited, used and valued.

The other important issue that those on board the Endeavour pondered was whether Te Wai Pounamu was an island or part of a large continental land mass. This was not simply a question of immediate cartographical significance, but was part of a larger imperial quest. The British Admiralty had issued Cook secret instructions to search for the as yet undiscovered great southern continent, Terra Australis Incognita.

Only a few on the Endeavour believed that Te Wai Pounamu was continental in size and even those who did believe it was a large landmass did not necessarily see it as Terra Australias Incognita. Off the Otago coast, Banks reflected in his journal:

We were now on board of two parties, one who wishd that the land in sight might, the other that it might not be a continent: myself have always been most firm for the former, tho sorry I am to say that in the ship my party is so small that I firmly beleive that there are no more heartily of it than myself and one poor midshipman…

Banks has been given hope in part because the high hills and distant mountains that were visible inland from north Otago’s coastal waters suggested that Te Wai Pounamu was a substantial land mass. As the sun had set on 23 February, the air had cleared affording a good view of Te Wai Pounamu’s interior. Cook’s journal recorded:

We saw the land more distincter than we had at any time before, extending from North to SWBS [southwest by south], the inland parts of which appear’d to be high and mountainous…

Māori at Queen Charlotte’s Sound had told Cook that he could circumnavigate Te Wai Pounamu in just four days. But the evidence now clearly showed that ‘this Country to be more extensive’. Off Waikawa, in the southern Catlins, Banks remained optimistic that the minority view would triumph, writing in his journal: ‘Land seen as far as South so our unbeleivers are almost inclind to think that Continental measures will at last prevail.’ Two days later on 8 March, as the Endeavour drifted slowly south, Banks admitted that those lands that he spied to the south were, in fact, ‘nothing but clouds’. The following day, as they neared South Cape, the ‘Continent mongers’ grew dejected as the seascape and landforms suggested that they had reached the southern extreme of Te Wai Pounamu. As they rounded South Cape and pushed west on the 10th of March, Banks recorded the ‘total demolition of our aerial fabrick calld continent’. Te Wai Pounamu was not the great southern continent and by the time they were in Fiordland Cook was aware that there was an increasingly ‘small space’ for such a continent to exist.

Ultimately, the accounts of coastal Otago produced by the Endeavour voyage were not especially deep, particularly compared to the rich stores of knowledge accumulated during its visits to the east coast of the North Island, Queen Charlotte Sound and Fiordland. Nevertheless, while coasting Otago, the Endeavour’s officers and crew established the contours of the coastline and plotted some key features of both the land and seascape. But they had no human interaction and Europeans did not enter Otago harbour until 1809-10, during voyage of the sealing vessel, the Brothers. Thus coastal Otago was only slowly incorporated into the commercial reach of New South Wales and the trading networks of the British empire, but once those connections were established they did have profound consequences, consequences we shall explore in later posts.

Note: in this post,as in all of our posts, we follow the normal convention of historical scholarship in following the original spelling and punctuation found in the primary source.