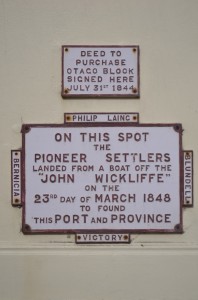 Key transitions in New Zealand history often start with boats: think of the waka that conveyed Polynesians to Te Ika a Māui and Te Waipounamu, Abel Tasman’s Heemskerck and Zeehaen, or James Cook’s Endeavour. The story of Otago’s systematic colonisation begins with two ships, the John Wickliffe and the Philip Laing.

The John Wickliffe, a 662-ton vessel which functioned as the Otago Association’s storeship but also carried 97 passengers, arrived at Kōpūtai or Port Chalmers on 23 March 1848. Its passengers were pleased that its passage was a neat 100 days: but this figure was only accurate if this calculation was made from 14 December, the date it sailed from Portsmouth. In fact, the John Wickliffe originally departed from Gravesend on 24 November 1847, but inclement weather and contrary winds thwarted its early progress and it took almost three weeks until it finally made positive progress. (In a later blog post we will explore the nature of the voyage itself and also the history of the Philip Laing which arrived 24 days later on 15 April 1848.) 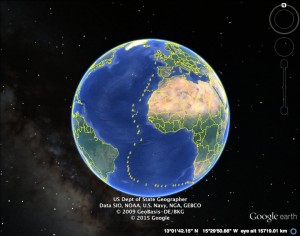 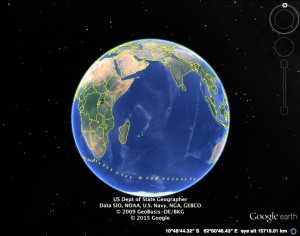 The track of the John Wickliffe, based on Rev. T. D. Nicholson’s Journal. 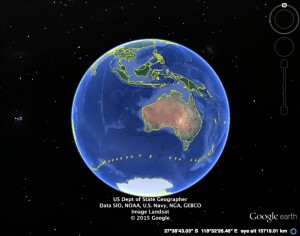 By the time John Wickliffe was quickly pushing east to the south of Australia, its crew and passengers were looking forward to sighting the land that was to be their new home. On 15 March, the Rev. T. D. Nicholson, who subsequently became an influential figure in the early history of Presbyterianism in Nelson, wrote in his journal: ‘A few days more, and a very few, and God’s Arm of safety around us, and the long sought shores of Otago shall see us.’ On March 18, the passengers began preparing a special banner to mark their landing at Otago: it was fashioned out of Mrs Nicholson’s wedding dress of ‘silk so blue’. On March 19, excitement rose as passengers saw the Snares Islands and then Rakiura/Stewart Island and on the 20th, the John Wickliffe sailed pass the mouth of the Mata-au or Clutha river. The wind dropped on the 21st and progress was slow along the coast. Onboard the John Wickliffe, Thomas Ferens, a Methodist dispatched to assist Charles Creed’s missionary work at Waikouaiti, was impressed by ‘Saddle Back Hill’ and noted ‘there are some very striking land marks’. The day’s slow progress left the eager colonists sitting some 6 miles from Cape Saunders. Ferens observed the abundant wildlife: ‘Birds of all descriptions are here – Gulls, Whale Birds, Sea Pigeons, Albatrosses, Cormorants’. He also suggested that the ‘air is most delightful – a sultry, ethereal sky, quite of the Italian character.’ His journal entry concluded: ‘Oh, what restlessness and anxiety to gain anchorages, and be on shore.’

On the 22nd the John Wickliffe anchored at the entrance to Harbour. The gunshots that captain had been routinely ordering as the vessel progressed along the coast finally had some result, as Charles Kettle, the New Zealand Company surveyor, and Richard Driver, the pilot, brought boats out to the John Wickliffe’s anchorage. Unfavourable winds prevented the vessel entering the harbour proper, but some of the passengers used this time to good effect. Henry Monson, an English Methodist colonist who would eventually become Dunedin’s gaoler, his second son John, and Thomas Ferens went out in a one of the John Wickliffe’s small boats with three Kāi Tahu men: they went ‘a-fishing Beracootas by a long pole with a short piece of wood and a crooked nail at the end which is attached with a string to the pole in the water’. This party landed three fish. Other passengers ventured out with another party of Kāi Tahu, headed by the great chief Te Matenga Taiaroa. These engagements initiated a tradition of collaboration and reciprocity that would not always endure. Ferens observed that these Kāi Tahu who welcomed the colonists were ‘very peaceful intelligent men’.

For March 23rd, the day the passengers finally arrived on land, Ferens began his journal with the simple but powerful observation: ‘A great day.’ But the landing itself was quite uncoordinated: Reverend Nicholson recorded:

The landing was neither particular nor general – one boat with a party went up to Dunedin, and separate parties went ashore at Port Chalmers to spy the land – all seemed pleased and called it a goodly land – Port Chalmers and around is truly beautiful – rich in scenery – its slopes and shores are fertile, and wooded to the water’s edge.

Ferens was also struck by the new environment: it seemed that he was encountering ‘nature triumphant’ and the beauty of the harbour was such that it made ‘the mind to rejoice and adore the Divine Being.’ Ferens went ashore with a party of other passengers and explored the bush-clad hills. The party shared a meal of fish and kumara with two Kāi Tahu before ascending the hill. The party ‘rambled amongst the Suple Jacks, a description of cane, underwood, numerous Cabbage Trees, Ferns Trees, Shrub plants, Brambles – the pines are noble trees, and many others of excellent size and quality.’ Ferens was particularly struck by the

Birds of various species – Thrushes, Green and Gray, Robin with white breasts and brown back and head – Linnets, Buntings, Tui, the Mocking Bird of the Starling species – 2 white tufts under the bill, and grey feathers on the neck – Cannaries – Cacaus [kākā] or the large Parrots, Parroquete – Pigeons plentiful and numerous.

The arrival of the John Wickliffe not only laid the foundations of the permanent colonisation of Otago, but it also marked a key turning point in the transformation of the local environment: this world of trees and birds quickly came under pressure. In later posts, we will reflect on some of those changes as well as exploring the development of the colony over the following decades.

Charles Kettle’s rendering of Port Chalmers, May 1848. The vessel on the left is the Philip Laing, the ship to its right is a coastal schooner, and the John Wickliffe is the larger ship at the right side of the image.

Transcript of journal of Thomas Ferens on the ‘John Wickliffe’ and in early Dunedin, MS-0440/016, Hocken Collections.

How do we think about our city?  What stories do we tell about the Dunedin and its people, past and present? How and why has the city changed over time? What is it’s current condition and what might Dunedin’s future be like?

This blog, which is run by the University of Otago’s Centre for Research on Colonial Culture, explores these questions. It will be particularly concerned with the history of our city and the ways in which its complex and rich past shapes the present. We are interested in thinking through the expansive connections – to Polynesia, across the Tasman to Australia, to the United Kingdom and Ireland, to continental Europe, to China and India and beyond – that have made and remade our city, its population, its economy and social life. We are interested in the meaning of these connections and the ways in which they influence the development of our communities.This blog will illuminate Dunedin’s changing place in the world, assessing the ways in which major global events have resonated here and how things, practices and ideas from here – from the ‘Dunedin Sound’ to Dunedin fashion, from the products of our farms and factories to the province’s proud sporting traditions – have circulated globally. But we are also interested in stories about a lack of connections, decaying linkages and the power of local processes: after all, not everything is global!

We launch this blog on a very important date, 23 March, Otago Anniversary Day. This day celebrates the establishment of the Provincial Government of Otago in 1852, which then included Southland, an important date in our region’s political and cultural development.  But, of course, it is also the date that the first of the Otago Association’s ships, the John Wickliffe, arrived in 1848, inaugurating the region’s systematic colonisation. More on that shortly….