This week ten high school students from all around New Zealand took part in “Hands-On History” – part of the larger “Hands-On” programme that this year includes the Humanities Division and has drawn nearly 400 young people to Dunedin for a week of intensive learning and fun. 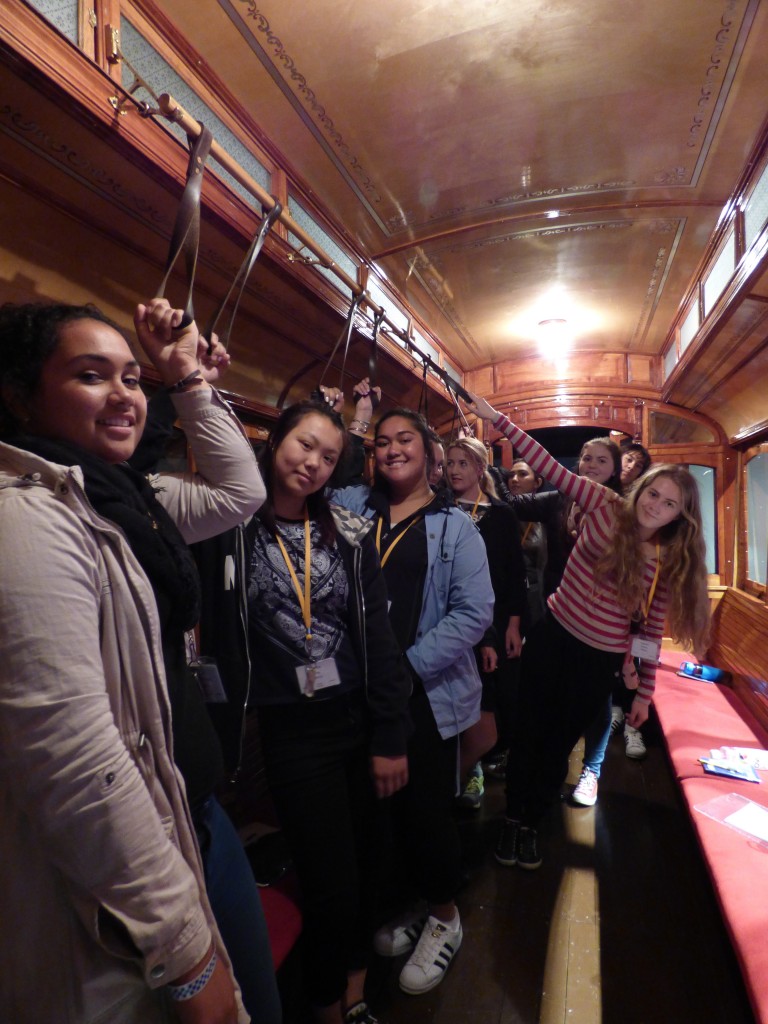 Hands-on students in the tram at Toitu Otago Settlers Museum.  Photograph by author.

The History group have been based at Toitu Otago Settlers Museum, led by Dr Jane McCabe of the Department of History and Art History. The students have been learning about the ways that objects – the everyday and the extraordinary – help us to understand the connections between local and global histories.

Working in pairs, the students’ task over the week was to research and write about an object on display at Toitu, thinking about the role of the object in the gallery and locating information about the object – initially at Toitu, and then at the Hocken Collections with the expert assistance of Katherine Milburn. We also enjoyed an excellent introduction to the Central Library collections at the University of Otago with librarian Charlotte Brown.

The following pieces have been written by the students about these objects. As visitors to Dunedin, they have picked up lots of local history, as well as bringing a different perspective to Toitu’s collections. They have come up with some excellent insights!

A piece of the “Endeavour”: Encounters Gallery

In the Encounters Gallery, one of the first displays slightly hidden away in the corner has a rectangular piece of wood with copper tin attached to it by large flathead nails. This object was recovered from the wreck of an abandoned vessel, the Endeavour, more commonly known as New Zealand’s first recorded shipwreck. 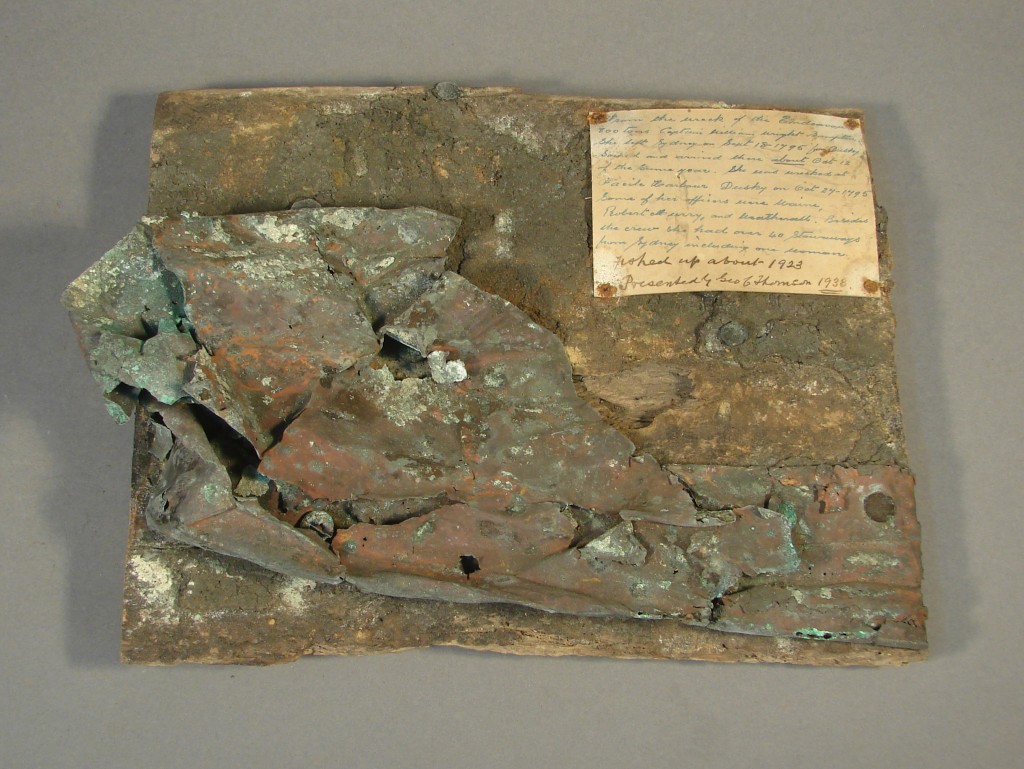 The object displayed has obvious signs of wear and tear such as a slightly eroded wooden surface and rusting copper which has been bent out of shape. The object has clearly been cut into shape as there are no jagged edges. The physical appearance of the artefact communicates its age and conditions that the ship was subjected to through its long life. The placement of the object in the museum is significant because it is one of the earliest pieces dating back to the early 1790s and therefore it provides a link with some of the earliest European settlers.

The Endeavour, not to be confused with Captain Cook’s famous ship, was used to carry cattle and supplies, particularly sealing supplies. (Sealing is important in Otago’s history because the first European settlers that came to Otago were sealers, whalers and traders.) In 1795, the ship left Sydney for Norfolk Island, but after encountering a harsh storm on the journey on the Tasman Sea it ended up in Dusky Sound sometime between 5-12 October. The exact date is unknown as no diary was kept for that week. In Dusky Sound the vessel struck a rock. The ship was then declared unseaworthy by the captain, William Wright Bampton, and was stripped and abandoned. There were approximately 244 people onboard, including 45 stowaways. They all survived, but 36 were left in the area, living in the mountains for 18 months before returning to Sydney in 1797.

The shipwreck remained in Dusky Sound and scavengers continued to take pieces of wreck right into the twentieth century. Various pieces have ended up in museums around the South Island, where, as at Toitu, the artefacts are treasured and recognised as an important part of our history.

This ceremonial shield was created for the Gaelic Society of New Zealand in 1881, as a symbol of their mission to defend the Gaelic language. The targe is constructed mostly of wood and leather, with a metal spike extending from the centre. It is embossed with Scottish thistles and the emblem of the Scottish national flag – the St Andrew’s Cross. The targe also has an inscription stating “Comunn Gharhealach, N.Z. 1881 Far Am Faigheadh Coigreach Baigh”, giving the date it was created as well as the society’s aim: “Far Shelter Foreigners’ Hospitality”. The targe, although created here in Dunedin, embodied the historic Scottish craftsmanship which arrived with the Scottish settlers. 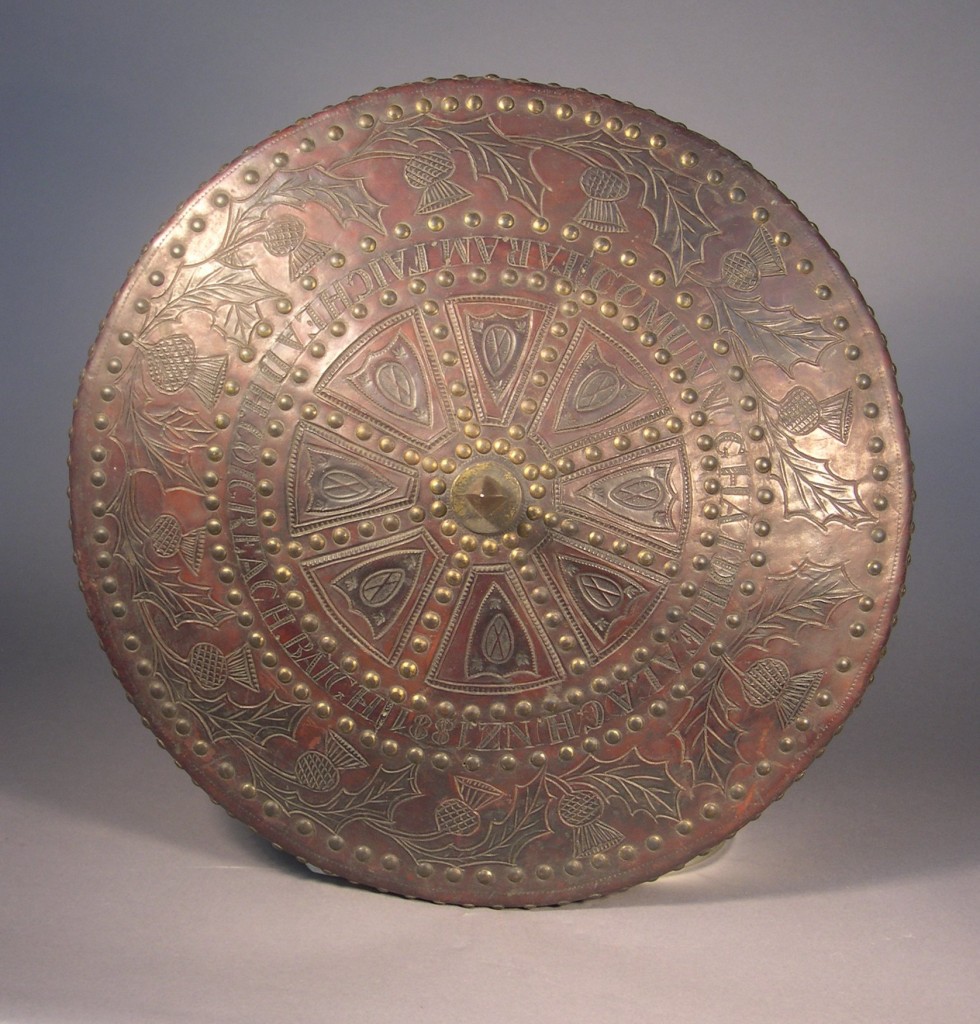 The Gaelic Society was formed in Dunedin in 1881 to unite Scottish people. Its formation was met with unexpected success with over 400 Scots willing to become members. Traditionally the targe was used by clansmen in close combat as a shield, and also as stabbing tool. However, for the Society the targe was used for ceremonial purposes to show their commitment and determination to perpetuate the Gaelic language, literature, history, tradition of the Scottish highland, and to cultivate Highland music and dancing.

Over the years the Gaelic Society’s numbers declined. In 1976 the Society’s numbers were at only 65, and at 2006 it was officially dissolved. The targe found its way into the Toitu collection sometime before the 1990s. Its provenance is unknown. It is possible that it became redundant within the Society, but now it has become a prominent part of the New Edinburgh gallery at Toitu telling the story of original Scottish settlers.

Would you ever consider wearing a cage if it was part of a fashion trend?

The crinoline cage is a popular bell-shaped petticoat that was widely worn under women’s skirts in the early 1840s through to the late 1860s. The once fashionable underskirt was first patented in the USA by W.S. Thompson in 1858 and was worn beneath women’s skirts to support the heaviness and fullness of their clothing, and to create a bell-shaped figure for the women of the Victorian era. The aim of the crinoline cage was also to decrease the size of the waist which was a huge trend in the 1800s. 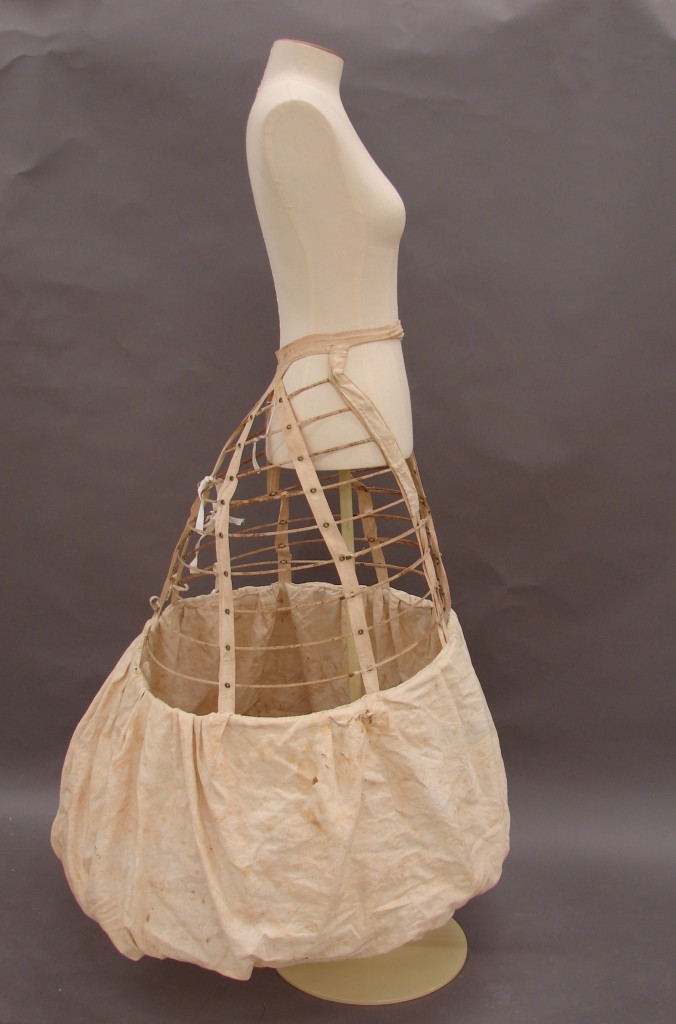 In its “naked glory”, the crinoline cage was made of vertical bonds of tape with rows of either steel, whalebone or cane, and a pleated flounce. Thompson’s prize medal skirt has metal bands covered with tape held in place with tapes, eyelets and dates from the late 1850s to the early 1860s. The shape of the crinoline cage changed following their introduction. By 1865 they were much flatter at the front, but longer and more protruding at the back.

Wherever they were worn, this “liberating device” (because it reduced the weight of petticoats) caused many accidents and were often quite hazardous. Their wearers were susceptible to being engulfed by fire – draughts from chimneys could attract the wide skirt and the air within fuelled with flames. Women were determined to wear then even though they were a hazard. Likewise, in Dunedin, renown for its muddy streets, this fashion was not a very practical way of dressing, yet because of social status and popularity women continued to wear Victorian outfits.

Visitors to Toitu can go back in time and experience Victorian costume by wearing a modern version of a crinoline cage, complete with full Victorian dress. Studying this object has made us aware of how trends have dramatically changed over time, and how strongly social status affected women’s desire – and determination – to follow fashion.

This opium pipe is located in a dark and hidden gallery that shows what life in “Devil’s Half Acre” (a central city slum in early Dunedin) was like; whereas just outside this gallery are shiny objects of the elite. This dark side is brought to life by sound effects in the gallery – bottles breaking, people fighting, and so on. This forms a contrast that shows how more wealthy Europeans had a totally different lifestyle than immigrants like Chinese. 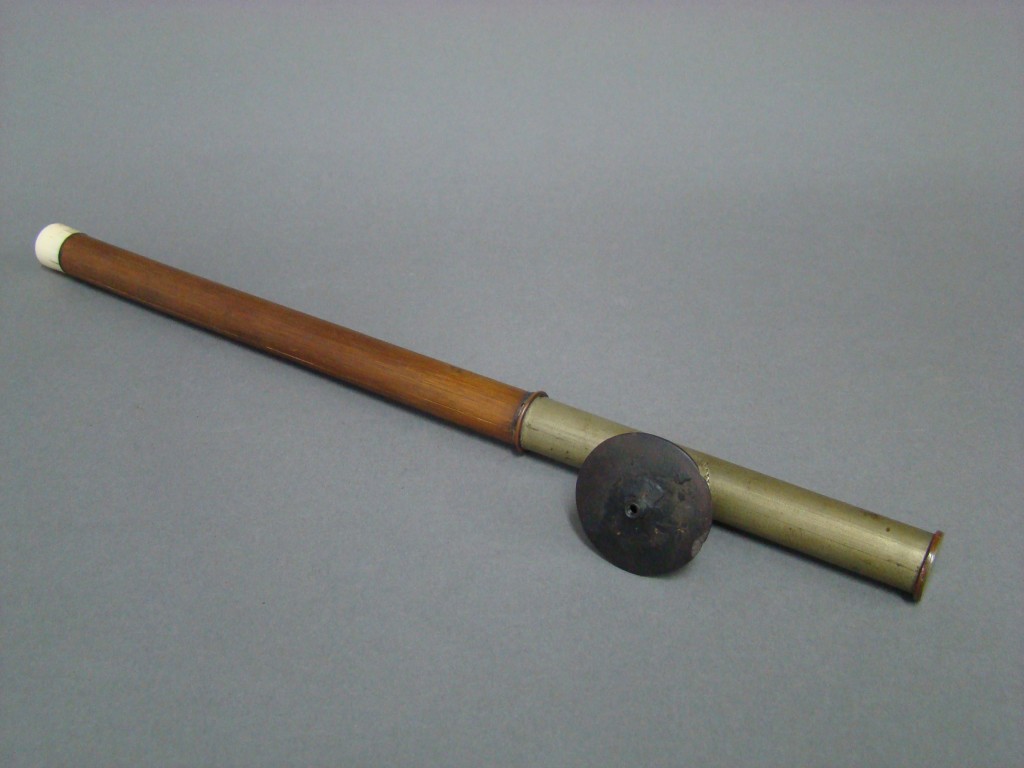 The first twelve Chinese came to Otago from Victoria (Australia) to look for gold; they were invited by the Otago Provincial council. While they came here originally to earn money for their families in China, many ended up staying in Otago for the rest of their lives. When the gold ran out they moved towards the city which led to more encounters with local European society, and discrimination. Many Chinese used opium, which itself was a result of the British actions in China.  When they came to New Zealand some Chinese brought this habit with them. But others developed this habit after coming to New Zealand due to many reasons such as loneliness and discrimination.

Because they used opium regularly others refused to accept them in society, and that led to more discrimination, so it became a neverending cycle.  Opium was prohibited in 1901. But that was not the end of the problem; this meant that many Chinese had withdrawal symptoms which prevented them from working and functioning property. So this pipe is a symbol of that hardship, and this is why it is important to have it in the Otago Settlers Museum. It also helps us to think about what happens when people bring customs from their home country to a very different social context.

Radio is an internationally recognised form of communication and entertainment that now is just one of many kinds of media. The instant availability of the latest music or the latest news makes it hard to imagine what life was like without radio. 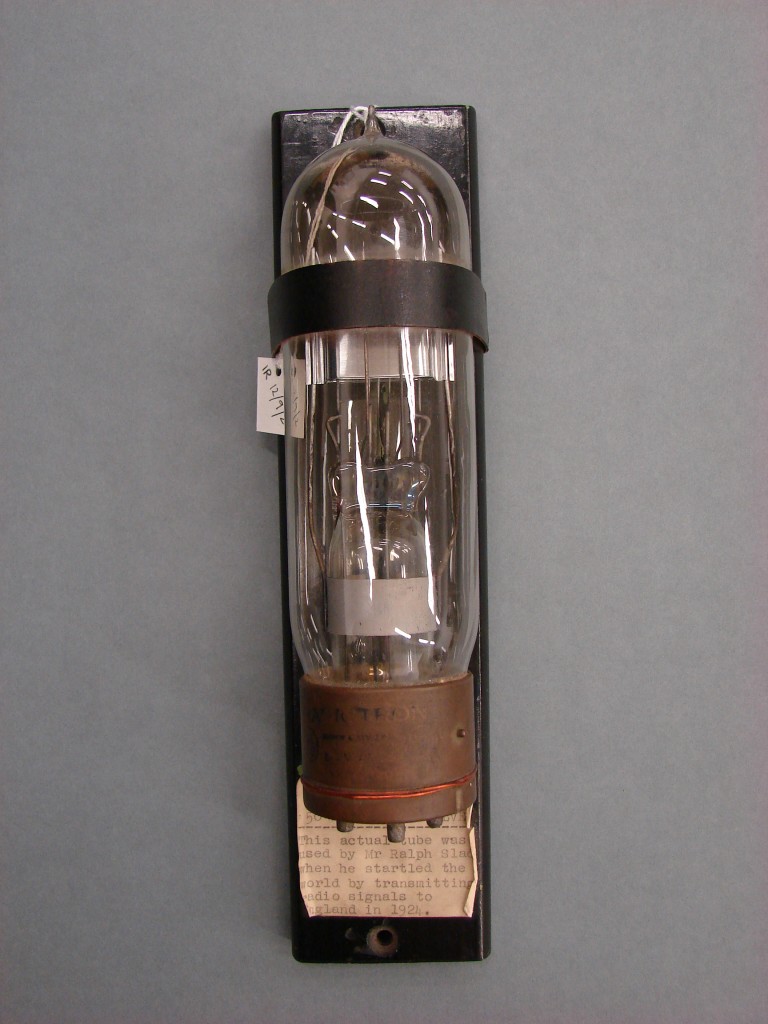 The valve is quite large – about the size of a water bottle – an intricate assembly of glass, metal and wire. It is a very fragile object, safely on display within a glass cabinet in the Technology gallery at Toitu. These valves were invented in France and used during the First World War, and were brought into New Zealand when some soldiers smuggled them into their jackets when returning from war.

In 1922, Dunedin’s Ralph Slade was able to receive radio signals from the USA, the first to do so in New Zealand. But this is not the only technological breakthrough Slade was to be a part of, no, he informed Frank Bell how to modify his radio set, which played a vital role in enabling the first round the world two-way radio contact between Frank Bell and a Mr Cecil Goyder in London on 18 October 1924.

The radio valve was one of many achievements for Frank Bell, who continued to break records in the distance for sending radio transmissions. So we can see that Dunedin was globally connected a century ago through advancements in this technology.