Gold-Dredges: From Dunedin to Siberia

Posted on October 19, 2015 by Anthony Ballantyne

Toitū Otago Settlers Museum holds the relic of an industry that 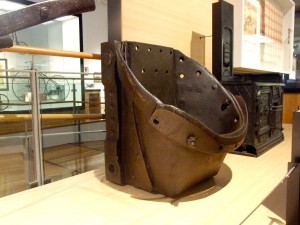 Gold-dredging was a New Zealand phenomenon. As early as 1863, during the alluvial gold boom, miner Charles Nicholson had invented a spoon dredge to lift gold-bearing gravel from the Molyneux (now Clutha) River, and later formed the first dredging company to try, albeit unsuccessfully, to exploit the resource. Attempts at building pneumatic dredges, diving bells and submarines then followed, all with little success. The man who would revolutionise this fledgling industry arrived in Dunedin, via the Victorian and Californian goldfields, from the upper Panyu district of Guandong, in southern China.

In popular memory, Chinese gold-seekers are largely remembered as fossickers and small-scale prospectors, reworking the fields that European diggers had worked through quickly. The entrepreneur Choie (Charles) Sew Hoy was not a fossicker: he was a key figure in the development of colonial Otago, an influential merchant and money-man, and a gold-dredging pioneer. In 1887 he acquired rights to a sizeable block at Big Beach, a gold-bearing flat on the Shotover River. He formed the Shotover Big Beach Gold Mining Company the following year with the intention to dredge the waterlogged deeper layers of his new claim. After watching the Dunedin harbour dredge at work he ordered one of a similar type, adapted by local engineering firm Messrs Kincaid & McQueen, to work the river flat as well as the bed. By 1889 the Sew Hoy Dredge was producing remarkable returns, generating up to  £40 for a day’s dredging. 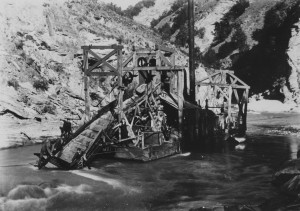 Its success triggered a rush to peg claims up and down the rivers of Central Otago, attracting entrepreneurs and investors then gripped by the worst economic depression the province had known. It was the genesis of Otago’s first gold dredging boom, lasting from 1889 to 1891. By the end of 1889, Sew Hoy’s company was joined by sixteen other gold-dredging interests, and another twelve followed in 1890. Sew Hoy’s venture not only established dredging as a commercially viable strategy for gold mining, but also initiated some of the innovations that have led New Zealand engineers to acquiring world wide recognition. During the 1890s, Sew Hoy’s prototype design was refined, redeveloped and the size and capacity of the machines increased. Within a few years these continuing improvements gave Otago’s dredge operators the most sophisticated machines in the world, and as they became more standardised in construction, they were collectively, and proudly, known as “The New Zealand Dredge”. 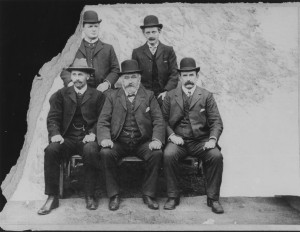 The experiments, discoveries and experience of dredging in greater Otago established Dunedin as the world’s leading centre for dredge design and construction. In September 1899 there were 40 dredges, each costing between  £3000 and £10000, at various stages of construction between the firms of Kincaid and McQueen, Cutten Bros., R. S. Sparrow and Co., Cossens and Black, the New Zealand Engineering and Electrical Co., Morgan & Cable and A. & T. Burt, which laboured day and night to complete their orders. The pressure on local foundries and firms that year was such that contracts were even sent offshore to Australia and Great Britain! Russia, Siberia, British Burma, Malaysia, the Gold Coast of Africa, South America and Australia are among the destinations of Dunedin’s famous designs. As early as 1898, Messrs Cutten Bros. of Dunedin received their first order from Siberia for the design, construction and erection of three dredges, customized for local conditions. By 1900 there were 228 dredges working in Otago and Southland. As the vast majority of these were designed and constructed locally, Dunedin benefitted not only from the reputation, but the revenue: the industry pulled the province from the shadow of the 1880s depression, slashing unemployment and contributing to the growth of industry and communications. Ultimately, Choie Sew Hoy’s successful venture and the innovations it was to inspire won Otago about one third of its total gold production. 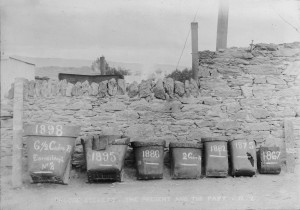 A timeline in dredge buckets. Note the pronounced increase in bucket size between 1886 and 1895, (Sew Hoy’s first successful year was 1889). “Dredge Buckets, the present and the past”, S05-165i, Hocken Collections, Uare Taoka o Hakena, University of Otago.

So while Toitū’s dredge bucket may seem to a humble or mundane object on first sight, its influence has been profound and stands at a centre of an important set of global connections that shaped our city.