100 years ago the Telegraph Office was Dunedin’s commercial nerve centre. 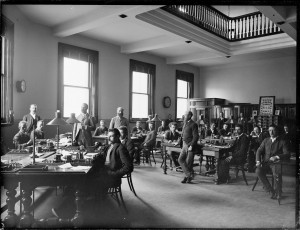 Fast and efficient communication was a recurrent challenge for the inhabitants of Dunedin. However, the discovery of gold brought some 64,000 immigrants to the region between 1861 and 1863, fuelling an economic boom that not only prompted an expansion of commercial activity but also drove the emergence of a range of increasingly specialized enterprises. Accordingly outward mail from Otago increased 350% between 1860 and 1864, more than one quarter making its way to Victoria, where many miners had families or business interests.

While hand-written letters remained vital in maintaining contact between individuals a day or more apart, the telegraph captured the popular imagination as the world’s first form of instant communication. After spreading rapidly around the world during the 1850s, the telegraph finally reached New Zealand in July of 1862 when Christchurch and Lyttleton were connected. In Dunedin, local business interests and newspapers had been agitating for speedy communication with Port Chalmers, the district’s main port of call, as well as with the goldfields in the hinterland. Thanks to the efforts of Julius Vogel and Provincial Superintendent James Macandrew, the line from Port Chalmers to Dunedin was established in August 1862, erected by a local firm Messrs Driver & Co. 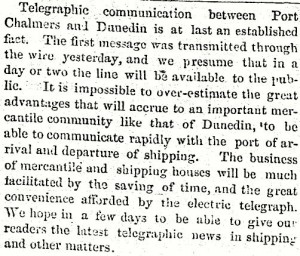 Connected! The creation of the Port Chalmers-Dunedin telegraph line announced in the Otago Daily Times,16 August 1862, 4.

Dunedin’s first telegraph office, “a small cottage of a familiar type”, was established in Lower High Street and managed by Messrs. Driver & Maclean. The first government telegraph office was however, “nothing more nor less than a sentry box” situated between the Driver & Maclean’s office and the Custom House. Formerly this modest structure had been used to shelter the armed constables who guarded the gold deposited in the Customs building. It contained only enough elbow-room for one, requiring two of the three officers to wait on the footpath whenever a telegram was being transcribed. These Dunedin offices were nodes in a rapidly growing network, as telegraph lines were being extended to all the principal centres and, in turn, lines were quickly reaching out into the hinterland from these major site of settlement. The first Cook Strait cable, a crucial link in the entire system, was laid in August 27, 1866. By the end of the decade the South Island was comprehensively linked by telegraph. 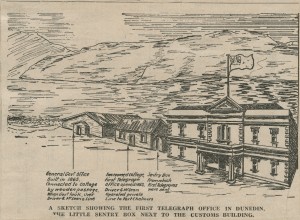 Early in 1866 Dunedin’s sentry box was superseded by a larger weatherboard shed on the corner of Bond Street, which was then on the waterfront. Ngāi Tahu fishermen drove a brisk trade selling barracouta and other fish caught from the Heads, pulling their canoes up onto the beach and conducting business through the office windows!

Although it was later superseded by a grand building in 1877, Dunedin’s humble weatherboard telegraph office was, in fact, a key site in New Zealand’s first “hacking” scandal. This was initiated by the arrival of news in October 1870 that Napoleon was imprisoned in Germany and that France had been declared a republic. For Dunedin’s European-born population these were momentous developments as detailed by the Otago Daily Times: “a greater degree of excitement [had] never been witnessed in Dunedin… a crowd of two or three hundred literally besieged our doors, waiting for three or four hours at least until the telegrams were published”. 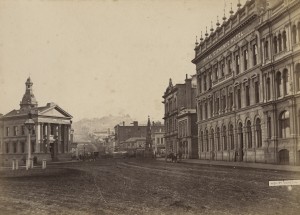 In 1877 the Weatherboard office was demolished and a “more imposing edifice” erected in it’s place (far left). Fast and reliable communication facilitated massive commercial and industrial expansion in Dunedin, the results of which can be seen in the resplendent appearance of the office and the Royal Exchange Hotel to the right. S15-012a, “Dunedin, High Street”, [ca. 1890], messrs. F. Bradley & Co., c/nE2336/6, Hocken Collections, Uare Taoka o Hakena, University of Otago.

The editor of the Otago Daily Times George Burnett Barton believed that the Government had been interfering in the operation of the telegraph services, ensuring that news reached pro-Government newspapers more quickly than those publications that were critical of the current regime. But, in fact, these momentous developments stories reached colonists in Dunedin more slowly than the readers of Wellington’s Independent newspaper, which received the news before its rivals and was able to break the story in New Zealand through the production of a special Extra edition. Barton accused the Government of delaying the relevant telegram addressed to the ODT, while ensuring that the generally sympathetic Independent got the news first. The Government parried back and had Barton charged for libel, to which Barton counter-sued against Charles Lemon, General Manager of the Telegraph Department in Wellington. A Parliamentary Select Committee that investigated the affair the following year, but it failed to established guilt and it careful findings brought the affair to a quiet close. Still, it is interesting to note that New Zealand’s more recent clashes between politicians and journalists over the use of technology, from the Key/ Banks’ Tea Tape of 2011 to the Slater/Collins emails of 2014, have a longer history than one might think. 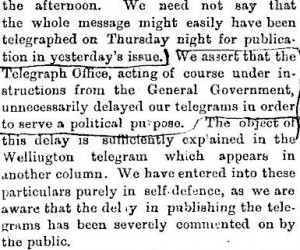 Libel! ODT editor G.B. Barton protests against a tactical telegram delay, provoking the wrath of the government in a very public libel suit. The outlining was present in the scanned original of the newspaper, proof of its importance. The Otago Daily Times, 1 October 1870.

Political controversies aside, telegraph technology was seized upon by local firms such as Dalgety Ltd. and the Union Steam Ship Co., which developed their own private codes. Such enterprises flourished with the benefits of fast and reliable communication, and in turn, telegraph returns provided functioned as reliable barometers of economic growth. Figures throughout the 1860s and 70s confirmed Dunedin’s reputation as New Zealand’s commercial capital and they are a strong reminder of the long-standing connections between communications and commerce. 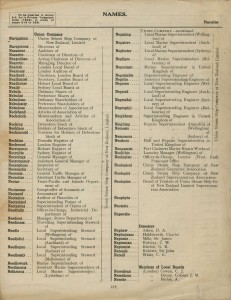 Confidentiality and Compression: Sparing expense and preserving commercial secrecy was the aim of the game. The Union Steam Ship Company’s elaborate 515 page telegraph code book did just that- condensing “Assistant General Manager of…” to “Necromancy” and “Auditor of Branches of…” to “Nectarine.” Hocken Collections, Uare Taoka o Hakena, University of Otago.