It seemed like Dunedin had been invaded by Canadian academics at recent Centre events.

The first event was a half-day symposium, “Colonial Families: New Perspectives” on 20 August, organized by Angela Wanhalla and also funded through her Royal Society Rutherford Fellowship. This featured Laura Ishiguro (University of British Columbia), with ‘“Say nothing”: gossip, intimation, and the limits of intimacy in a colonial family’, a paper that investigated the mixed-race David-Phillipps family, and the gossip and silences around the marriage and children. Jennifer Ashton (Auckland), spoke on ‘Respectability and the Half-caste: The Russells and Manings in 19th Century Hokianga’, on the efforts of early elite Pākehā males for their mixed-race children to gain the cultural capital necessary to become respectable in the emerging settler society. Crystal Fraser (University of Alberta) gave a paper on ‘Reconciling the Future: Past and Present Understandings of Gwich’in Families in the Northwest Territories, Canada’ which looked at her own family’s history living in the “two worlds” of Indigenous and “modern” Canada.   Erica Newman (University of Otago) finished this session with the paper ‘The Care of Fiji’s Orphan’s During the Colonial Period, 1874-1970’ looking at guardianship, adoption and orphanages in colonial Fiji, with particular emphasis on Fijian Indian children. 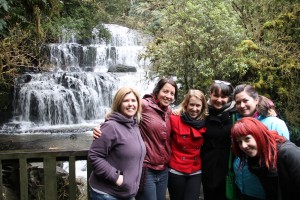 Canadian guests at the Pūrākaunui Falls, in the Catlins, with members of Otago’s History programme, on the weekend. From left: Angela Wanhalla, Jane McCabe, Kate Stevens, Laura Ishiguro, Crystal Fraser and Kristine Alexander.

On 24 and 25 August the two-day symposium, ‘”Unpicking the Tapestry”: Children and Young People in British Colonial Contexts’ was held at the Hocken Collections.  CROCC member, Hugh Morrison, gathered a great range of scholars to look at colonial children’s history.  This began with a mihi whakatau (welcome) from Mark Brunton, Māori Research Officer (Office of Māori Development, University of Otago). 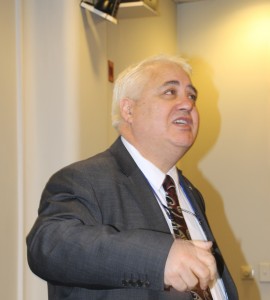 The first day’s talks were as follows: Crystal  Fraser (University of Alberta) ‘”We went through hell together me and my friend; we cried together, we got shit together, and we fought together”: Student Life at Hostels in Northern Canada, 1950s to 1980s’; Chris Brickell (University of Otago) ‘Transport, Modernity and the Making of Adolescent Cultures’; 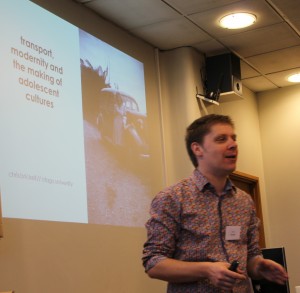 Susan Cahill (Concordia University) ‘Where in the Girl’s  Realm  are  the  Irish?:  Representations  of  Irish   Girlhood  in  British  Girls’  Periodicals  1880-1914′; Michelle Smith (Deakin University) ‘The Family and Maternal Feminism in Colonial Girls’ Literature’; Helen  May (University of Otago) ‘Froebel’s “New Child” in the “New World” Colony: Transforming the Kindergarten across Cultures and Continents’; Christina  Ergler (University of Otago) ‘Managed Childhoods? Questioning the notion of Urban Children’s Free play in Aotearoa over the Course of History’.  Kristine Alexander (Canada Research Chair in Child and Youth Studies, University of Lethbridge) closed off the first day with an evening public lecture, ‘A Tangled Web: Children, Colonialism and Archives’ looking at how the presence of children is marginalized within the Archives. 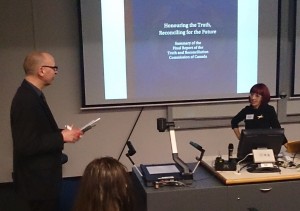 The second day’s lineup included Lynette Townsend (Te  Papa) ‘Child-­made Material Culture: an Assemblage of Colonial History’; Jane McCabe (University of Otago) ‘From “Grandmama’s” to “Up the Hill”: Three Childhoods in One Empire Family; Hugh Morrison (University of Otago) ‘Children and Missions: Shifting Identities and Colonial Spaces’; Laura Ishiguro (University of British Columbia) ‘”The future of this country will depend on our children and children’s children”: the Aspirational Politics of Settler Futurity in Colonial British Columbia’; Bettina Bradbury (Victoria University (NZ) and York University) ‘”I don’t think I was ever a boy’: Edward Kearney Junior’s Memoir, Emotion, Memory and Colonial Childhood’; 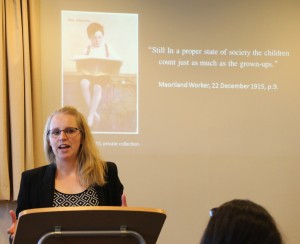 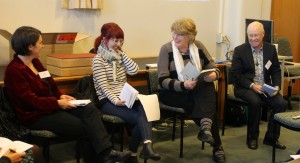 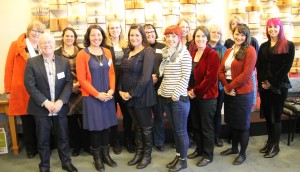 Extra Media options:  Dunedin TV (the local station) broadcast a two-minute television clip on the “Unpicking the Tapestry” symposium, with short cameos from a few of the presenters.  Click here to view.

This was also the first time we have actively used Twitter at a CROCC event, with Angela Wanhalla (and a few others) disseminating regular tweets of snippets of presentations, and the odd photo, as the symposium progressed.  These can be accessed on Twitter through #cyccs.  Angela has also created a Storify package where the tweets have been collected together, and can be seen without having to have a Twitter account.  Click here to access.

Thanks to Hugh and Angela for organizing these two amazing events, and to all the  scholars (from Canada, Australia and New Zealand) who made their way to Dunedin to share their research.