New Historical Perspectives on New Zealand and the Sea

This past few days have been a veritable “history week” in Dunedin, providing a diverse and fruitful time for historians with a string of connected events.  One, a specifically CROCC workshop – “New Historical Perspectives on New Zealand and the Sea” – discussed below, capped off the week, but CROCC members were present at all events, and were involved in the organisation of most of them. 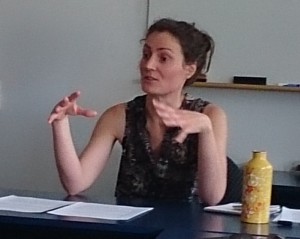 Frances Steel, organiser of New Historical Perspectives on New Zealand and the Sea

Things kicked off on Tuesday with the one-day conference of the Religious History Association of Aotearoa New Zealand at the Presbyterian Archive Research Centre (Hewitson Library, Knox College).  I heard from John Stenhouse and Hugh Morrison (CROCC members) that this ran really well.  On Tuesday CROCC also ran a successful workshop for postgraduate students working on empire and colonialism at St Margaret’s College.   Tony Ballantyne and Maya Jasanoff (Harvard University) led discussions with about 15 postgraduates from Otago and other New Zealand universities.

The main event was of course the New Zealand Historical Association’s biennial conference held in the St David Lecture Complex, at the University of Otago, with about 200 attendees enjoying three days of multi-streamed presentations and five brilliant keynote speakers: Maya Jasanoff, Damon Salesa (University of Auckland), Elizabeth Elbourne (McGill University) Atholl Anderson (Australian National University), and Henry Yu (University of British Columbia).  It is worth noting that while not an official Centre event, the organising committee (Tony Ballantyne, Angela Wanhalla and Michael Stevens) and NZHA executive (Tom Brooking, John Stenhouse and Barbara Brookes) are all CROCC members.  One of the highlights of the conference was the conference dinner (and Atholl Anderson’s keynote address) out at Otākou Marae, on the Otago Peninsula.  No doubt, there will soon be much more information on the NZHA conference on the History Department’s Facebook page. 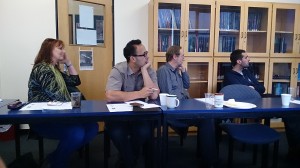 On Saturday the CROCC-sponsored event, New Historical Perspectives on New Zealand and the Sea, organised by Frances Steel (University of Wollongong), was held in the History Department at the University of Otago.  It began with Jonathon West offering a short discussion remembering Ian Church who passed away recently.  Ian was a well-published local historian with a keen interest in maritime history who was very generous with his time and knowledge with a number of younger historians.  Frances then opened the conference proper posing some ideas and questions with relevance to oceanic and maritime histories. 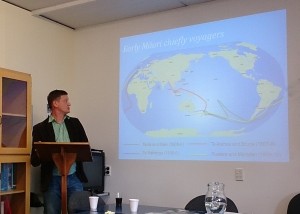 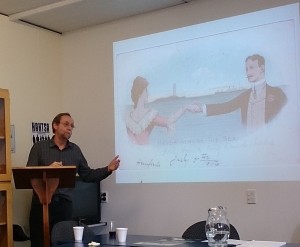 Peter Gilderdale with Hands Across the Sea

The first speaker was Michael Stevens (University of Otago) who has recently won a prestigious Fast-Start Marsden research grant to look at the “global” aspects of Southland’s coastal port of Bluff.  Michael of course discussed Bluff, but in particular explored how the colonial history of Māori might be reframed to incorporate the sea.  Jonathan West (Waitangi Tribunal) followed with a talk that investigated what lies beneath the surface of the sea, and how it was the nature of the ocean current currents and the coastal and marine topography that provided such a bounty in the surrounding waters for first Māori, and then for the Pākehā settlers.  Alison MacDiarmid (NIWA) then gave a fascinating talk on how humans have affected the marine ecosystems around New Zealand.  While some species have disappeared from some areas, there is some good news, with some other species now regenerating.  Her research is just part of wider multi-disciplinary research involving scientists as well as archeologists and historians.

After a short break, Susann Liebich (James Cook University) discussed her current research on magazine culture, and how maritime themes and stories appeared in their content of Australian magazines between the wars.  Philip Steer (Massey University) followed with an analysis of how a number of recent New Zealand historical novels have incorporated the sea and sea travel within the plot lines.  After lunch David Haines (Waitangi Tribunal) took us back to the pre-Treaty days when Māori were active in sea travel, not just to New South Wales, but also as far as London.  He sketched out the stories of two voyages by Māori rangatira between Sydney and New Zealand, one to the Bay of Islands, the other from southern New Zealand, illuminating the ways that Māori chiefly status might manifest itself on board these sailing ships.  Peter Gilderdale (AUT University) then brought us to the late Victorian and Edwardian colonial period when “Hands Across the Seas” postcards linked New Zealand (and other colonies) to Britain, and sometimes to the USA.  These postcards proved particularly popular with migrants, often featuring oceanic steamship travel.   Tony Ballantyne gave the last prepared presentation on transport, communication and the flow of ideas, and how the speed and pace of colonial life changed as technologies developed.  The afternoon was then brought to an end by two thoughtful responses from Jonathan Scott and Damon Salesa (both University of Auckland) on what they heard, followed by a discussion on how this collaboration might be continued in the future. 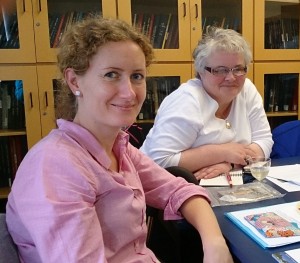 The Centre for Research on Colonial Culture congratulates all those involved in the events that ran so successfully this week.