Posted on November 20, 2012 by Lachlan Paterson

A very successful symposium on Colonial Performance was held at the Hocken Collections Seminar Room on Monday, November 19th. Presenters gave illuminating talks on a wide range of colonial performances from Irish drama in Dunedin, to Maori performers in Manhattan, to the theatre of the Dunedin police court, among other topics. 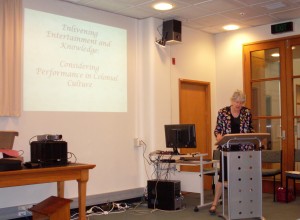 Barbara Brookes gives the opening presentation at the symposium

Barbara Brookes, who convened the day-long symposium, kicked off the event with a discussion of touring medical lecturer Dr. Anna Longshore Potts.

Barbara was followed by two presentations on the theatre scene in Dunedin. Lisa Warrington invited us into Dunedin’s first theatre, a converted horse stable, and Peter Kuch drew attention to the importance of Irish drama in the development of Dunedin theatre during the 1860s. Kirstine Moffatt entertained us all with stories about the amateur pianist, who appeared in private homes, at concerts held in church halls, and barns.

Unlike Richard John Seddon, who spoke for hours at a time, Tom Brooking used a mere 20 minutes to describe the role of performance in colonial politics. At the same time he revealed some of the popular prejudices against Seddon in New Zealand’s historiography. Rosi Crane drew upon her doctoral research in the history of science to show how university professors used their role as public intellectuals to advance scientific understanding, for example in the field of evolution.

Bronwyn Dalley gave a vivid account of the many re-inventions of ‘urban investigator’, free-thinker and spiritualist, Lotti Wilmott in 1880s Christchurch. The tensions between ethnographic ideas about race and “primitive” societies were put to the test by the appearance of Maori performers at New York City’s Hippodrome in 1909-10. Marianne Schultz, from Auckland University, also explored how the leaders of the US suffragette movement used the case of Maori women, who had the right to vote, in their own campaigns for enfranchisement. Michelle Willyams also looked at Maori performers and performance, highlighting the hybrid nature of the musical repertoire developed by Reverend Seamer’s Waiata Maori Choir in the 1920s and 1930s. 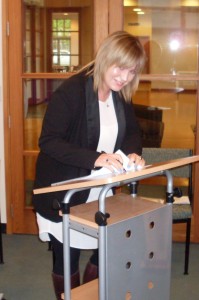 University of Otago MA student Fabia Fox walked us through the streets of nineteenth-century Dunedin, and into the backyards of homes in the ‘Devil’s Half-Acre’ famous for its criminal underclass. Their exploits were often played out in the Dunedin police court, and relayed to a voyeuristic reading public through the column of the court reporter. In contrast, John Stenhouse embellished his talk on the Rev. Rutherford Waddell with his own rendition of excerpts from his famous sermon on the sin of cheapness. Prof. Lyn Tribble (English) eloquently wrapped up the day, drawing together the various themes into what she described as an ecology of performance.

One thought on “Presenters Perform”