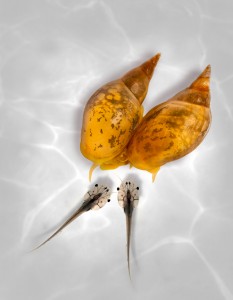 Externally, most organisms including us humans look bilateral. That being, if we cut a human being directly in half (theoretically, murder is not endorsed by the author) down the middle each half would have one eye, one arm, one leg and so on, a mirror image of itself. However, the internal composition is very different. If we were to inspect the inside of our half human, we would find only the left side would contain a heart. The asymmetry of the internal organs of most bilateral organisms has previously not been extensively studied, the genetic basis largely unknown.

A team of researchers lead by Angus Davison investigated the origins of this asymmetry using Lymnaea stagnalis, a snail which shows naturally inherited difference in the coiling of their shell, known as chirality. Unlike humans and other bilateral organisms, these snails wear their asymmetry on their backs, making it very easy to observe the phenotype. The coil of the shell is controlled by a single maternally inherited gene. Naturally, most have a shell that coils clockwise (two dominant alleles DD), those with the recessive alleles (dd) exhibit an anti-clockwise shell.

Using genetic mapping (finding a genes location) and genomic approaches they were able to determine the chirality locus. This method narrowed the candidate genes down to six, of which only one, Ldia2, showed significant difference in expression associated with genotype. Ldia2 is one copy of tandemly-duplicated diaphanous-related formin genes (aka formin), the other being Ldia1. Whilst that sounds complicated, tandem duplication only means that a single gene has been duplicated beside itself and diversified in function to give Ldia1 and Ldia 2. The Ldia2 gene in dd individuals was found to have a single base pair deletion resulting in a frameshift, and a non-functional protein. Formin are a group of proteins involved in the formation of actin filaments (also known as microfilaments) the support structure or scaffold of the cell.

In DD individuals (clockwise shells) there was high levels of Ldia2 transcripts compared to the dd (anticlockwise) where its expression was negligible. The frameshift mutation is not lethal to the dd snails, owing the to paralog Ldia1 which likely has similar roles in embryonic development allowing the embryo to continue developing.

When a fertilized egg begins to divide, it initially divides into two, then four, then eight and so forth. Interestingly, when investigating the expression of Ldia2 mRNA during these divisions, they found its expression was already asymmetrical by the two cell stage only being expressed in one of the cells (Figure 1), and further confined to only one cell by the four-cell stage. This demonstrates that asymmetry is established very early in development, and occurs before any morphological features appear.

Taking this finding one step further, they decided to look at how inhibition of the Ldia2 formin gene would affect phenotype of DD individuals. They found that they could partially convert those with clockwise shells to being anti-clockwise using formin inhibitor drugs, those snails, however, unfortunately did not survive. That aside, it showed that formin was acting in the way they suspected in chirality, and disruption of its function resulted (as found in those individuals with the mutant Ldia2) an anti-clockwise shell.

The question then arises? Is this solely the case in L. stagnalis or is this asymmetry of the cytoskeleton which provides the blue-print for development a conserved mechanism across other groups

Using the the model organism Xenopus laevis (a frog, not some kind of warrior princess) they conducted two experiments to investigate the left-right patterning of this vertebrate. Firstly, they applied the same formin inhibiting drugs as used on the snails to embryos of various stages of development. They found that exposure to these drugs caused heterotaxia, where organs develop on the incorrect side of the body. To further this, they injected into the embryo the mouse formin gene dia1 into Xenopus embryos to stimulate a gain of formin function. Again, they observed heterotaxia, with disorganization of organs occurring which can be seen in Figure 2. From this figure we can see that over expression of formin leads to a pretty messed up tadpole. And so it appears that formin is not restricted to the asymmetrical patterning of snails but also of vertebrate. 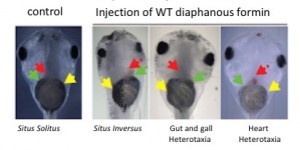 But what does it all mean? And why should you care?

While which way a snail shell coils may seem insignificant to some, the same mechanism likely underpins why we are the way we are. This research shows the asymmetry is likely an ancient basal trait of animals, showing that formin is the earliest “symmetry-breaking” determinant in snails and frogs, and possibly even all bilateral animals. Now knowing the role formin plays in asymmetry means new research could explore formins function in other organisms. This may be of particular interest for human disease and those individuals who suffer from Heterotaxy Syndrome, where organs are not where they are suppose to be (for example, the heart on the right instead of the left). It’s hard to believe that those slow often overlooked critters in our gardens could hold the key to understanding the evolution of bilateral asymmetry.

This entry was posted in Uncategorized by Katie Steffert. Bookmark the permalink.

15 thoughts on “Snailed it, knowing our left from right”