Original Article at US PIRG

The Driving Boom—a six decade-long period of steady increases in per-capita driving in the United States—is over. 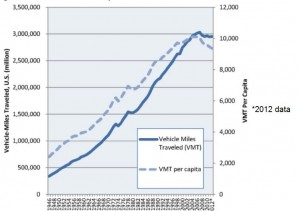 Americans drive fewer total miles today than we did eight years ago, and fewer per person than we did at the end of Bill Clinton’s first term. The unique combina­tion of conditions that fueled the Driving Boom—from cheap gas prices to the rapid expansion of the workforce during the Baby Boom generation—no longer exists. Meanwhile, a new generation—the Mil­lennials—is demanding a new American Dream less dependent on driving.

New visions do not start with popular support